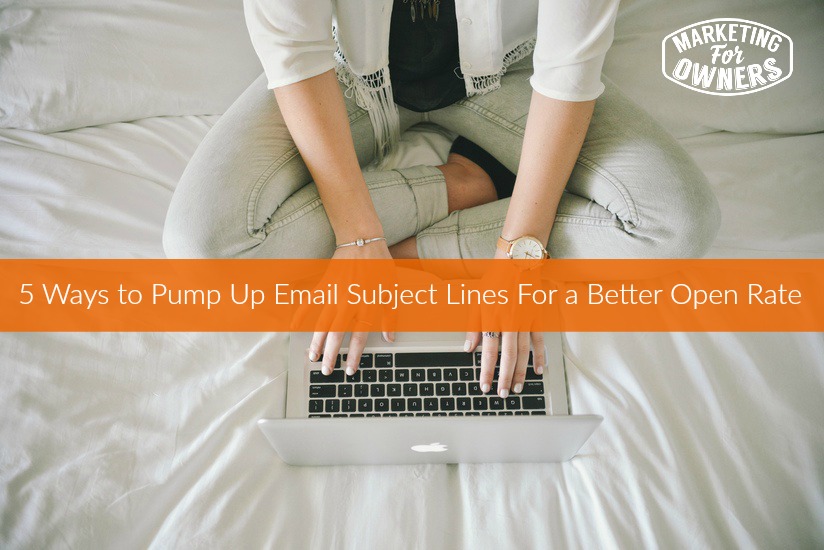 Your email mailing list is one of your most valuable marketing tools, but with so many newsletters and promotional emails filling the average inbox every day, standing out can be a challenge.

Think about it: you’ve probably scrolled passed (or worse, deleted) several emails from businesses today — and they’re probably businesses you’ve subscribed to.
That’s why the most important part of your email is the subject line. If the subject line doesn’t get their attention, all the work you put into the body of the email is worthless — they’ll never see it.
Here are five quick tips that will help you write subject lines that stand out.

1. Be Friendly, Not Salesy

One of the quickest ways to the trashcan is to look like junk mail. Would you send an email to a colleague with a pushy subject line in all caps with multiple exclamation points?
(Granted, you might in an urgent situation, but if you sent all of your emails to them like that, they urgency would wear off pretty quickly).
Instead, use brief, approachable subjects that pique your receiver’s curiosity.

Here, Buffer and Pocket are competing for your attention, Buffer with a long, detailed subject that will draw a click if you’re interested in an email course on social media.
Pocket’s more vague and familiar “We’ve found a few things you can save to Pocket” is less specific, but has the potential to bring more clicks just out of curiosity.
Even something like “Hey, what’s up?” can work, but don’t be misleading. Follow it with something like “Check out the latest” or risk leaving people feeling fooled when they open it to a promo and not an email from an old friend.

With so many promotional emails that are aimed toward anyone with an email address, personalized email subjects can make people feel a little less like they’re just an email on a list.

Using the recipient’s name in the subject won’t necessarily fool them into thinking you’ve written an email just for them, but it can still help to combat the Bystander Effect, a psychological phenomenon where people are less likely to participate in something if there are lots of other people around.
(This originally applied to situations where people were less likely to intervene or call for help if a crime was being committed in the vicinity of many people, because everyone assumed that someone else would. It’s the same with emails, apparently).
If you use a mass email tool like Mailchimp, you can add the recipient’s name (or other piece of information, such as their city) by using the Merge Tags feature.

You need to be careful here, because most email programs don’t like very flashy subjects that look like spam.
Using all caps is generally going to be seen as annoying, but capitalizing a single word for emphasis can help make your subject pop.
You want to avoid getting creative with punctuation marks (especially using them as decoration rather than punctuation), but marks like pipes ( | ) can break up longer subjects effectively.
Many mass email tools (again, Mailchimp offers this) allows you to add emoticons to your subject, like so:

You have to admit, it’s eye-catching, but you should use them sparingly. As this feature takes off, it will lose its effectiveness and just serve to clutter people’s inboxes, so keep an eye on our own inbox. If you’re seeing a lot of emoticons, it’s time to try something else.

Long email subjects can make your inbox look cluttered — those brief, to the point subjects stand out as cleaner, simpler, and probably not trying to take up a lot of your time if you click open.
It’s OK to leave an air of mystery — again, people may be more likely to click if they might be interested than if they know they’re not. Groupon has this figured out:

But Groupon also knows that some deals will catch more eyes than a vague subject:

About every other promotional email Groupon sends out has a specific subject. Switching up tactics is not only OK, it’s a good way to cover your bases — just be sure your  stay true to your brand in all of your subject lines.

When someone sees one of your emails, you want them to think of it as a message from a friend, giving them something of value, whether it’s a discount or useful information.
In order to build up that kind of (admittedly pseudo-) relationship, you need to make your brand’s voice recognizable from one email and subject line to the next.
If you do choose to go with a casual “Hey, what’s up?” tone, use that tone in all of your emails. That applies to any voice you choose, but it’s especially important if you’ve chosen a more distinctive voice.
Ideally, after a while, your subscribers will know it’s you just by looking at the subject line.
If they like you — if you consistently offer them something of value when they open your emails — you should build up a good, healthy open rate.
Do you have any tips or tricks for creating subject lines that get results? Let us know in the comments!
[hide_from accesslevel=‘free’]

Are You Ready To Start Doubling Your Business With Half The Effort?

If you have a business, whether it’s established or brand new, wouldn’t it be great to know how to use free and low priced modern marketing methods to boost the number of customers banging on your door and dramatically increase your profits? And with no technical degree, no sales staff and just a few minutes a day.
As a member of The Owners Club, you’ll get free access to the methods I used to bootstrap my company from zero to a million dollars in its first 12 months with no sales staff (it was actually $1,002,000). And the methods I’m using today to keep growing it beyond 97,000 customers with very little effort. Best of all, it’s absolutely free.
Go here to get started
[/hide_from]