Today we are talking about making money online. I feel almost duty-bound to protect you from the people who try to convince you to make money online.

The reason for that is because in your online marketing effort, you are going to go through social media, you are going to look for examples of good opt in lead magnets of good-looking websites, of content to share with your following and so on.

You are going to come across adverts and posts and tweets and things of unbelievably tempting goodies that will convince you how easy it is to make money online doing this.

Now, the way it works is awful for the vast majority. So let me put you in the picture for once. If you had a system that was so super that you could make billions and you made all this money easily-because generally the people who teach how to make money online, they tell you how much money they made in what shorter time and with how little effort.

If it was that easy, why tell anyone else to do it?

If you’re making all that much money why do you need to sell it to a few hundred people at $100 a pop? Exactly! 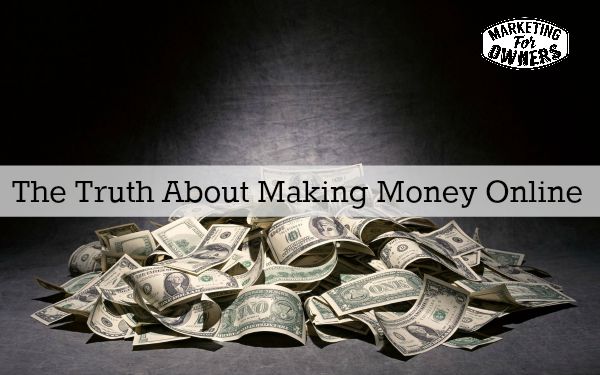 Generally, when somebody teaches you or sells you something like that, it has passed its sell-by date or, more commonly, it didn’t exist in the first place.

More often than not, when you buy that system, they bring you in, they teach you a system that they’ve used; no proof. Don’t forget, with Photoshop and everything available now, any checks you see with all the money, any bank statements, all of that can be photoshopped very, very easily, and generally is, by the way.

There are no advertising standards — people are going to catch them; they never do. So they’ll show you that, and then one of the things they’ll teach you in how to make money is how to sell what you’ve just bought to your friends and to claim an affiliate commission for say 50% or something.

How easy is that? And by then, you’ve read their sales letter, you’ve read everything about them. They are so darn good that you feel this would be easy to sell.

After all, you’re not stupid, you bought it! So you buy it, you try to convince your friends to buy it, they don’t buy a damn thing. But the original person doesn’t care because they got another sale. That’s how it works.

Now, this is generally what you are going to come across. There are a lot of them. In my experience, if they tell you how much money they made in a short space of time with no further evidence of what they made the year after that and the year after that; then don’t believe it.

It might have worked once, but it isn’t working now, otherwise they would have updated the amount they made with the bigger amount they made the year after. In my teachings, for instance, it would be very simple for me to total up everything I’ve ever sold, convert it into dollars from pounds.

I prefer to explain what to do to have you see that it is used, not just by me but also by others, and then to show you how to do it. And eventually, possibly, to teach you how to do it at a cost .

But there is no evidence of that now and whatever happens, whatever it is, whatever I teach is stuff that is just generally available and is being done.

I’ll give an example of who’s doing it, others, not just me. So this isn’t snake or salesman stuff. So just be careful when you are online. Don’t believe the hype. It is hype. It might not work, but nobody cares because they’ll have had your money.

Today is Monday. It is time for a book for the week. Today, for some reason, I’m actually holding a book and it is the Presentations Secrets of Steve Jobs. It’s by Carmine Gallo.

He has another good book as well. However, with this book, what he did is he studied what Steve Jobs did. Steve Jobs the ex-Apple CEO before his untimely death, was a fantastic presenter.

He was the ultimate salesman; he had news people, millions of people all desperately hanging on for his announcements, for his stand on stage, and he had a style of doing it. That style, he worked at for years, because we’re all going to think that, “Oh! We can’t do that. We’re not Steve Jobs.”

Steve Jobs was as nervous as anyone. He was hopeless at the start. He used to practice those speeches over and over and over. These were not natural to him; He had a system and he worked a system.

Carmine Gallo has broken down, deconstructed and reverse-engineered that system. If you read the book, it can give you a way of presenting YouTube videos, presenting in front of a small audience, a large audience, one client, presentation online, anything. I strongly recommend. I

It’s a good read. It’s actually good fun as well. I strongly recommend you get the book and let me know how you get on.

What do you know about making money online