I have been on a voyage of discovery, recently. Being a member of Strategic Coach, I had a one-on-one meeting in Manchester because I’d missed the group session. One of the subjects that we’re discussing right now is perfectionism.

Dan Sullivan is fabulous, who, by the way, is the guy who started Strategic Coach. He applies things to himself before he applies it to his clients.

One of the things that he discovered was that he was a perfectionist. It was holding him back and it was making him procrastinate.

I’ve read his things. I went through his exercises and the funny thing is  —it didn’t apply to me, or so I thought, so this is more of a confessional.

I want you to look inside yourself and see if this is happening to you too, because perfectionism, for some, will manifest itself very, very obviously.

I mean there’s OCD which is something else. That’s way over at the top. That’s the people who must have everything just so, otherwise they have anxiety acts and so on.

But, perfectionism is where you have to get the job done 100%. 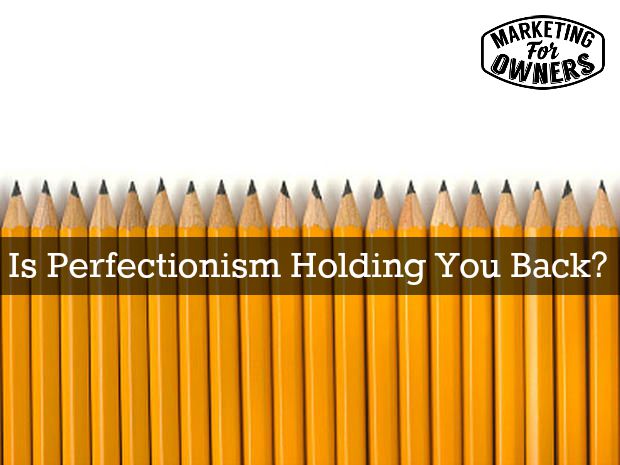 Sometimes, because you know it would have to be done perfectly, 100%, you have to get all your ducks in a row, you have to have everything so much so that you can’t even start it.

Now, that is the extreme or whilst you’re doing it, you never ever get to the end. Your planning, your preparing everything just so, and then the work, it never gets to the end because it has to be finished in a certain way.

I know people who this affects and I know some of you are listening that you are also affected by this but, it’s not necessarily you. That’s the funny thing.

Since I’ve been discussing this, others have called me or confessed that perfectionism holds them back as well. These are people that I’ve not actually realized deal with this.

I wouldn’t have thought “You? Really? I didn’t realize. You’re actually a go-getter in mind.” But, they think it’s holding them back and, of course, they know they have to analyze themselves.

If they then delegate it on and 80% of that following bit makes it 99%. Can you see how this can get more accurate? But more often than not, 80% was good enough.

For instance, if you’re taking a photograph, or perhaps, you’re editing a video, you edit it to death. You go through the sound. You pick out everything, because you don’t want people to look at your video and think you’re not fabulous.

Those people are quite happy watching every day YouTube videos without a second thought of the quality. It’s all in your mind.

Now, for me, I was talking to Jennifer and I was discussing about perfectionism. I was explaining that it didn’t apply to me and the procrastination does.

It’s the disease of the entrepreneur and the small business owner, but procrastination applies to me very often. But, it’s in a different way.

I was explaining how when I want to do something new, I will look out for the experts. I will watch and learn. I will decide who are the experts in the field. I will study them.

I will pick out what they do that is special and what sets them apart. Then, I will look to model my version on where they are or what they do, so that instead of starting at the bottom run, I start three quarters of the way up the ladder.

Like a jump start, like a running start,  they’ll be standing on the shoulders of giants etc. So, I learn from the experts. I learn what they know. I avoid all the mistakes that they’ve gone and learned for me. I model them and I apply it to my business.

I’ll tweak it and apply it.

Now, that is my unique ability, really, is developing those strategies and starting at a high level. But, what I then realize is — if it’s a new commitment, it’s something that’s got to be ongoing.

I don’t like to start something that I can’t finish or I can’t continue with at that high level. If I start, I’ll start at a high level and continue the high level, such as podcasting.

I do a daily podcast. I can’t start it until I know I can manage to do it every day. If I’m thinking, “Well, next week I’m going on a holiday, I’ll start it when I get back from holiday,” that kind of thing. I found this applies to a lot of what I do.

The things that I do myself, holds me back. I think the commitment of ongoing to do it at that high level, I better just wait until everything is just so.

Suddenly I’m thinking, “That’s perfectionism. Oh my gosh, I’m a perfectionist. Ah, what is the world coming to?” So, in Perfectionists Anonymous, of course, it’s just me and you, isn’t it?

Hello, hello, everyone. My name is Jon Butt and I’m a perfectionist. I’m not as bad as everyone else. I’m not a perfect perfectionist which I thought gave me a wild card, gave me an exemption, but obviously not.

Now, I’m starting to become aware of this and I’m doing stuff about it. For instance, Periscoping is a commitment. I signed up to a 30-day challenge to periscope every day.

Once I start, I’ll be going on, and then strategies. Watch this space. So, that’s me. What about you?

Does this apply to you at all?  Is that why you’re not doing the stuff you know you should be doing or is it another excuse? Look deep inside yourself. What is your excuse?

As Tony Robin says, “What’s your story?” It’s an excuse, but is it perfectionism? Because if it is, if you can identify, perhaps you can work around it.

Try your best. It’s going to help. I’m sure we’ll be discussing this again many times as I learn in my journey, to get over it. If I learn any good tricks, I’ll let you know. 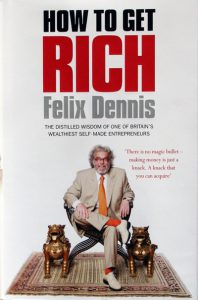 It’s a Monday which means it is time for a book for the week. Now, today I’m going to recommend an autobiography. It’s not your typical business book. It’s a story of someone who did extremely well.

The guy’s name is Felix Dennis and it’s How To Get Rich — yes, How To Get Rich. Some of it is a bit in your face. In the Audible version, he actually reads it.

Some, you might think, ” Uh, it grates a bit,” because he’s determined to get rich. Now, Felix Dennis set up a publishing empire, Dennis Publishing I think, but famous for Maxim, the magazine.

Now, he sold it a few years ago. But, when he died last year, he’d become a lovely guy, by the way, and went to poetry and that was his new thing.

When he died, he was worth half a billion pounds. That’s about $800 million American dollars, and self-made from nothing. His story explains all the bad things he did and all the good things he did.

He’s well known for saying he would be worth about 650 million, but he blew a 150 million on women, drinking and drugs. What can I say?

There are many phrases that go with that, but he’s very honest. But, he changed at the end. In fact, the vast majority of his fortune, he left to be used to look after a forest.

He’s cultivated and grown a new forest on his estate and he wants that, but it’s a fascinating book. I hope you will take the time to read it. I’ll see you tomorrow.

Are you suffering from perfectionism?