How to get more done is one of the most common issues with entrepreneurs, business people and people in general, in life, in work.

Even if you have a job working for the man, getting more done is an issue for you too. Especially if you enjoy your job because then you want to get more done, that’s important isn’t it.

So there are ways around it, of course everyday you’ve got things to do.

You’ve probably got marketing responsibilities, if you’re listening to this then yes you have got to do social media stuff, you’ve got to do blogging stuff and then, Oh gosh you’ve got customers to contact, or you might even have work to do. You know the actual work, the doing work. 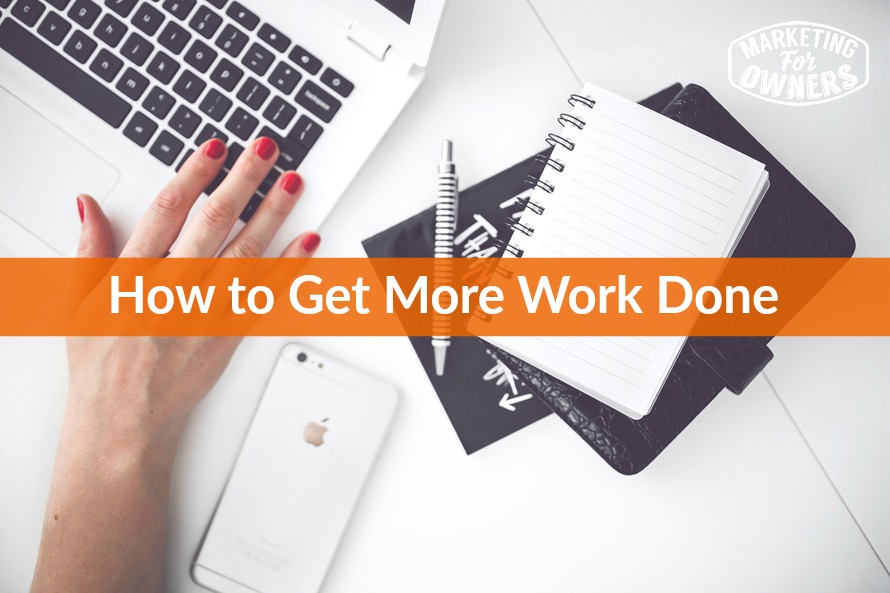 So there’s a lot, so how can you organize and get all this stuff done? I bet you are thinking, “Yeah Jon this is great. I’ve got all that to do, you expect me to be a blogger and to write and to send emails and to send tweets. All this social media and setup a marketing system and all that stuff, we never have time.”

Well let me tell you, how to get it done. It is possible and this is what the successful people do. They do not chance by arm. It’s not on a whim, their day is not on a whim. It’s not made up.

They don’t have rims of assistants there to help them. Don’t forget when people do have assistants, the assistants are doing what they’ve asked them to do. Their system is what they set up.

So first of all, it’s going to involve some planning. So I’m sorry about that, but not a lot. Don’t worry. So at the end of the day, say for example, you finish at 5’o clock.

Yeah I know, you’re all laughing. ‘Who finishes at 5’o clock?’ but let’s just use that as an example. Instead of finishing at 5’o clock, or five to 5, finish at twenty to 5.

Okay, I know you are thinking –there’s no way. You’ve been at work all day. There is no way you are super-efficient at ten to 5, five to 5. You are done.

Unless you’ve been procrastinating and you haven’t done your work earlier and now you have to quickly do it before 5’o clock before you go home.

That’s another story but that we’ll get solved by this in a retrospective kind of way. So what you do, you finish it at 4:40. And firstly you write down a journal, what you’ve achieved on the day because there’s nothing worse than getting home and someone says —

So write down what you did –what you have achieved. There’s nothing better than having a record of having achieved things.

You don’t have to have some great success. It’s not like winning the lottery, then after that sold a millions dollars’ worth of whatever.

Just the things you did. Every little bit. Everything, so that you can chart that you did something.

What I use for this is a free service, a website called www.idonethis.com. Go to that. You can figure out, there’s plenty of other ways you can look up.

There’s a Five Minute Journal, there’s the Freedom Journal by John Lee Dumas, Entrepreneur on Fire. There are many things of recording and journaling — gratitude logs, where you are grateful for all those things.

But anyway, record what you did, for your sense of achievement.

Next write down the two major things that you need to do tomorrow. That if someone said that the world’s going to end — what would you want to accomplish?

Now actually that’s a bad example isn’t it, it isn’t going to help you get your goals. If someone said, “You can only do two things today, they have to be the most important things ever, what would they be?”

Those are the two things. They may be awful but they’ve got to be done. They have to be things that move you forward.

So this is not phone Jed and check if he got his parcel. Something like that. These are project worthy tasks, things that can be done.

These are not things that are part of the, this is not create marketing system. This would be an actual task that can be done and completed on the day. That’s it.

If you’re wondering why only two, it makes it easier to achieve. Once you start getting good at doing two, you can move up to three. But I’ll come back to that in a minute.

Those two things, you’re going to write down on your to-do list or on a post it note or on something and you are going to stick it to your screen and those are the things that have to be done.

Now your to-do list for tomorrow will have nothing else on it. Nothing else. Let me clarify. You should have a waiting list, a kind of backup to-do list.

A to-do list that you cannot see, that is not in front of you. I use an online tool called teuxdeux.com. I know it is paid, but it’s like $3.

It syncs with your mobile and your iPhone and your iPad and everything. But very easy to use. But the payment is minimal. It’s like $20 a year or something like that. But it is genuinely really helpful.

So hide the rest of your stuff and when you come in, in the morning, before you do any emails, do not touch your emails.

Right, let me say that again. DO NOT TOUCH YOUR EMAILS. Okay. Do nothing until those two tasks are complete.

And the reason you are not going to touch your emails is because people will send you emails, asking you to do things.

But I was around when mobile phones were invented so go back before those. There was no way that someone could contact you for something in demand, unless they phoned you.

And then if you’re busy, the person answering the phone will say, ‘I’m sorry, He’s busy at the moment, can I take the message?’ And if they said this is life or death urgent, can you get in this message?

Then fine but otherwise it will be, ‘Yeah no problem, here’s my number, ask him to ring me back later, when he’s got time.’

But now email. You feel you’ve got to answer. You haven’t. Imagine if you were out, imagine they sent that on a weekend, you weren’t in wort, you didn’t even do work emails till Monday, that have to wait.

They’d be fine. If it is urgent, they’ll ring you, if they don’t know your number, it can’t be urgent, because they don’t even know who you are. Get my drift.

So that’s what you do. Now once you’ve done those two tasks, you can then do emails or answer emails and social media things and mess about. But allocate a time.

Take half an hour, even an hour and do it something like 12’o clock or 1’o clock or after lunch. A specific time every day. This will get stuff done.

One more, pick it off, do it. If you do that, pick another one off. And then at twenty to 5, decide two more things.

If you manage to get four things done on that day, don’t get all cocky, and go on and put four on tomorrow. Put two.

If they are becoming easy, they’re possibly not things that are worthy of your time. Perhaps you need to think.

Now these things that end up on your to-do list will come from you setting goals. Goals of what the company and the business and the future is going to be and goals for your next 3 months and how you are going to get there.

Break Down Your Projects

Pick 3 major projects to get done in 3 months and then break down those projects into the important things to get them done.

Take a project as being 1 month, so imagine it as 20 working days. You see you’re reverse engineering on this, 20 working days, you go back, you create a number of tasks to do.

Now all those you think, what about all the other things I had to do? Do them in the afternoon. You’ve exhausted your best energy, you’ve used up your top energy in the morning. Don’t give me the, ‘Oh, I am much better later in the afternoon’.

No you are not. You were messing about procrastinating in the morning. You didn’t do anything. You’ve eventually decided, ‘I’ve got to do something now.’ So you think you are better.

Do you think you are a night owl? Or is it because you procrastinated and avoided work all day but you feel you got to do something eventually.

You had nothing else to do, so you are just going to do it at night time. Think about it because there might be something. But it’s all down to getting started. That’s how you get things done. Simple, eh. Yeah lot easier than you think. It’s all right, it took too long to explain but I think it’s important. 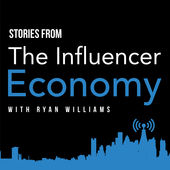 Today is a Thursday and today it is time for a podcast. Now I’m giving less information because I want you to go and listen and find out for yourself. So today is Ryan and the Influencer Economy.

Now Ryan Williams by the way, he interviews top people, top influencers who have made a difference and who have started from somewhere and then gone for it.

You’re going to learn good stuff. He does good interviews, that’s good guess. I like it. Anyway that’s good for the day. You will do your to do list and listening to me tomorrow. Might be on it but you have to do it in afternoon, I’ll see you tomorrow.