This is one of the things that has discussed in the course. Your content and your messages and everything that you do for the public, for your staff, for everybody needs to be true, needs to be correct.

Now this may sound obvious, but the reason I’m talking about it is I just want to let you know I normally don’t mention anything to do with politics, however, in America, in the early days of the presidential race, the Republican and the Democrat parties are choosing their candidates and with the Republican Party quite to say Donald Trump is doing his thing.

Of course every single politician I would add, tell different stories at different times of their career, but in recent times, Steven Kobre was set  to interview Donald Trump. It’s very funny.

If you Google Steven Kobre — Donald Trump video I’m sure it will come up and what he had was Donald Trump, making statements that he’s made a few years ago and then Donald Trump on the opposite side making a reply.

So, he’s basically debating himself and making himself reply and making a statement about the same name subject in his current guide and one completely contradicts the other.

Now the rest of us don’t have that disadvantage of a huge TV network of researches.

You must deconstruct these videos and speeches to find these facts, but there are plenty of instances I know where people in their companies have told one story and it’s not quite true.

Now we may have been hype, it might have not been directly shall we say a lie, but more likely economically with the truth.

It’s one of those fabulous phrases that makes me just laugh that means not telling the truth. What happens is you say one thing then you forget it and later on you say something that contradicts or something comes up or someone asks you to prove it and then you can’t.

Or you’ve contradicted it and then you’re on the defensive you need to get out of it and like I said this could be to your staff for example.

If your business is making a lot of money, you may not want your staff to know because you feel they’ll ask for pay raise.

It’s not like that. You need to involve them in the whole story, but you may tell them the company doesn’t make any money, but you forget they can probably check by looking at the company check or get the information from somewhere.

At the same time, if your company is not making money, it’s losing money you feel like you don’t want to tell them because they will all leave.

I think if you tell them and be honest with them, they’ll help you find a solution

Now with facts for customers, if you tell them something about your product and your services and then you can’t follow through, they will find out.

It might not be now, but it might be a year later. With the power of social media these days, you can’t take that kind of risk, it’s not just worth it.

Then you will be contradicting and then you can be interviewed.

You may be telling of a story of how you started, this is not exactly the same.

People Will Doubt You

People are going to doubt you and if you say this one, this version is actually the truth, they won’t believe you.

That’s all we are all after because once people trust you, once they believe you, then you can sell them your products and services, but until then, it’s all we’ll look it, we’ll check it.

So, please do yourself a favor, I’ve seen so many fall into the trap For example — you want advertising money on your blog and you tell someone you get a thousand page views a month.

What happens if they try to enter into negotiations with you to place an advert and you think great and then half way through they ask you by the way, can you send me screen shots of your pageviews?

Don’t Be On Reputation Cleanup 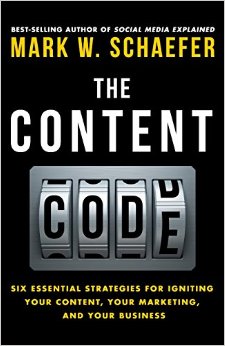 It’s Monday and that means it is time for a book of the week. Today, I’ve got a good one I read this one recently — I should have read it a while ago, but it came in March, last year, and it’s by Mark Schaefer.

Mark has written other books  and he is an excellent social media marketing genius. His new book is called The Content Code.

What he does is he takes you through the full journey. There are six basic contents of that system.

Takes you through the full journey, in the current climate of a content marketing strategy from start to finish and that’s what important.

He gives examples of companies, large and small including his own success and others that are doing great things and he explains how they do it and what makes the difference.

The important thing with this one is, I made quite a few mark notes and I quite read books without making any notes whatsoever, but this was made quite a few notes, went back to it and wrote them down and used the data.

If you want to get this copy for free, from Amazon, sent to you wherever you are in the world,  go to marketingforowners.com/free book.

If you want to get the links I want you to go and look up for yourself and find out everything else about Mark.