One of the main areas of my marketing system is email marketing and follow up emails. Generally most of us, once we get a sale, that’s it. We are done, but for us, we like to keep hold of our customers.

We make a massive massive effort with existing customers to keep them interested and to keep in their minds and to be there ready for when they want to buy the next time.

Because once they’ve bought something they think that’s it, got it all. Never need any of that ever again sorted. But we know that something is going to come up.

You should be thinking the same, so we do this via email marketing. We also use the same process for perpetual customers, people who have not yet become a customer.

Now the trick to email marketing is you can say whatever you like in it. But if they never open it in the first place, if that they don’t ever open the email, you’ve been wasting your time.

And that’s where most go wrong. It just simply don’t put any effort into the email subject line. We have tested numerous and it’s an easy way to test.

If you’re using something like aweber or mailchimp, there’s ways of testing, you can send half out to a list with one particular title subject line and the other half with another one.

And just see which one gets the most opens. You’ll be amazed. Some will be very close but some will be huge differences. And you’ll start to find little triggers in those email subject lines that catch attention.

And just back up a little, you can go through your own email inbox and look at the kind of things that you open.

It’s like when you get your post or your mail in the morning. You go through it and you pick out the handwritten ones, you’ll pick out the ones that look more attractive, it’s just the way it is.

You’ll ignore, put all the ones that look like routine and spammy, just direct mail stuff to the bottom. Anything that looks more interesting, you’ll put on the top.

That’s the way you want to think about your email subject lines. And it doesn’t matter as well by the way. It could even be just, if you are sending out quotes and things. Don’t assume people are going to open them.

What Appeals To You?

Think about what appeals to you and then think of the newspapers. Think of magazines. Go to a newsstand, go to your newsagent, look at the tabloid headlines. They pay headline writers.

They have article writers, journalists and they pay top money to headline writers. That is what gets you to buy the newspaper. Look at magazines, look at Cosmopolitans, look at the women’s magazines, loads of them, look at the fitness ones.

They are all fighting to get your attention. See what they do in subject lines. So you need to think about that.

One trick is to have the person’s name. That doesn’t always work but we do find that it does. If you use an email service provider such as aweber or mailchimp or infusion soft, and so on.

They have a little code that will insert the person’s name if they gave it during the sign up process. And it’s very easy. So you don’t have to know what their name is.

Now what we found is this, bear in mind, we are in, this is from our fire safety industry business, but if you think about these things, you can bend them or alter them or use them for your industry.

Don’t give me that excuse, ‘Oh that won’t work for us.’ Please don’t ever give me that excuse for anything. Because I tell you stuff that will work for everything. We bend, make little bit adjustments like that and use them in our marketing business.

Now if that’s in marketing is could be new trick discovered, new hack, new something like that. It can be anything that attracts.

Everyone’s seeing same old, same old. By the way, once you find things like these at work, don’t just repeat them over and over, use them sparingly. So you need a variation. That one always works.

Another one that just involves the terms ‘difference between’. So if we ever say, I mean at fire safety, it might be the difference between an optical smoke alarm and a heat alarm — something like that.

People want simple comparisons. They want experts to tell them which one is best. And to compare. But when you say the difference between, it sounds more like a comparison.

And people love those, in all things. Even if you’re buying a new fridge, people want to know. Compare that one to that one. And the difference between them. See works with everything.

Guide or Anything Using the Word Guide

A guide to selecting summer flowers, for a landscape gardener. Something like that. Now we actually find, if we add simple, next to the word guide or quick, so a simple guide to, quick guide to twitter marketing. Again that will get opened more than normal subject lines.

Another one, and you’ll see a pattern here. Summary of, just add the terms summary of, you could be anything, you can be in any business what so ever.

You can be a personal trainer. Summary of the best 5 minute fitness regimes. And then you can give people a little snapshot.

There are book summary websites, good reads and things like that. There are numerous things, no one’s got time for anything.

Try these. Try these in your subject, in your email subject lines and see if they don’t get better open rates. 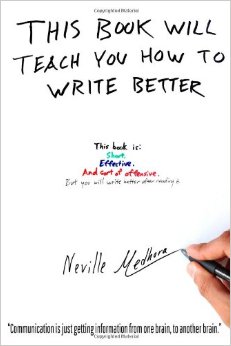 It’s Monday which means it is time for a book of the week. This one has a slightly long title. You are going to love it because it costs like $5. It’s nothing.

And it will take you about half an hour to read but it’s one of the most valuable books I’ve read for a long time. I’ve read it either 2 or 3 times so far. Because it’s so easy.

It’s called ‘This Book Will Teach You How to Write Better’ and it’s by a good copywriter, a new on the scene copywriter called ‘Neville Medhora’.

Neville does a lot of these appsumo copywriting but he’s great. He just simplifies it.

He just explains it, in a way that the rest of us can understand without some long convoluted how to do, copywriting.

He just says take this, welcome to our new website and replace it with this. It’s easy. It’s brilliant. You can read it, then read it again. Brilliant. Go get that book. I will see you tomorrow.