So what do you mean about being everywhere, Jon? I’ll tell you. In the Internet, there are many free places that you can use for your marketing.

And very simply, if it’s free, use it. If it can make you money, if it does well, use it more.

But you’ve got to try everything and you’ve got to be everywhere because it is not just about you, it’s about the person at the other end, the listener, the reader, the searcher.

Now, they will have their preferred way of looking for information and if you are not on the platform of where they look for their information, you won’t get to be one of their results and you are missing out. If it’s free, you shouldn’t miss out. 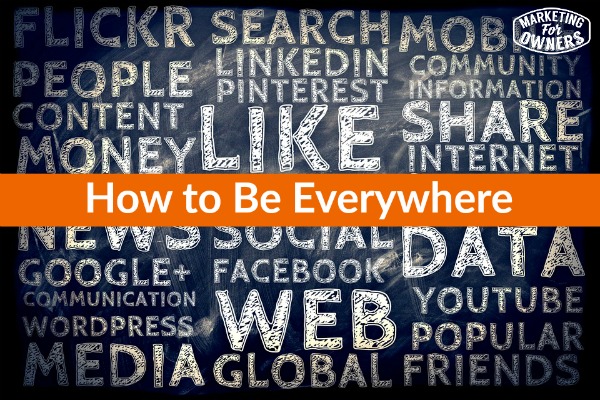 Now, in my marketing system, I talk about the seven P’s and I start with presence, you need a presence, which is your website and your website is your hub for everything.

Please do not use social media as your hub for everything. Others will tell you this, but in the long term, we are in for a long-term business here people, this is where you build.

Secondly, second P is profile, so you build the profile and that’s for you build profiles on social media platforms.

Now remember what I have said before, you don’t have to be using every single one, but you need to have a profile there.

So that if people look you up, if someone looks you up on Instagram, they need to find that you exist. You can then send them, give them a link back to your presence, to your website.

Same on Facebook, same on Twitter, they all give you an opportunity to have a link back to your website and that’s where you send them.

But if that’s where they look for you, they want to check you out, be there because if someone is a Twitter fan, they check you out on Twitter, you are not there at all, you are dead to them.

Remember, so we want to be everywhere, but that is a lot of effort.

Let me tell you how this can be done. Now there are many others that are fantastic at this, Pat Flynn, he explains a lot about being everywhere, he’s everywhere.

In fact, if he goes to a conference, he wears a little red backpack on his back that says “I am Pat, say hello”.

I mean, everyone knows who Pat is anyway and if you don’t, look up Pat Flynn, fantastic guy. But he’s over on social media as well.

Another one who is great is a guy called Jay Baer, he also is a fabulous, extremely professional user of social media and a true thought leader, really good guy to follow.

But what we do here is similar to Jay Baer’s system where we repurpose. Another good user is Chalene Johnson, just look her up because she is dead famous.

So what we do here, for example, is I am recording a podcast, this is an iPhone, this is just my iPhone sitting on top of a tripod in my garden in England, you can hear people in the background, we don’t edit them out because they’re out on the street because it’s a school holiday, it’s Easter holiday, kids are off school here for a couple of weeks.

And nowadays they don’t build houses with proper gardens anymore, they don’t waste the money. In England we don’t have any space by the way, so garden grass would cost a lot of money.

They would rather build another house on it and give you a tiny little postage stamp garden, so kids play out in the street.

It’s okay, it’s safe around here because it’s a cul-de-sac there is not much traffic, but they make a heck of a noise in the day. What am I talking about? Oh yeah, being everywhere.

So, I record the podcast as a video. Now this video will be uploaded to YouTube as is; it will be edited slightly.

It will be edited to just cut off the beginning and cut off the end so it works; there won’t be any other type of edit, I don’t do a second take, so if I fluff or mess up or forget my lines or if I sneeze or blow my nose, it will be in here.

For instance if my eye’s watering like it is now and I have to do that — can we edit that out? Now you think that I am talking to a whole team, but there’s actually nobody here, it’s just me.

So nothing will be edited out and it will go up to You Tube as is, it will just have an end put on it because you want to know how to follow me, etc. and it will have some tags added to YouTube, no big deal. We are not brilliant like YouTube, by the way, yeah tell me about it.

That will then be reused, so remember, so I have got a video up to YouTube. The next thing is, the audio will be taken out.

Now when we say the audio taken out, it’s just simply saved as an MP3, this is not technical, this is not some “Gosh, how do you do that?”

So a video tends to be an MP4 or a.MOV or whatever file, it’s just saved as an MP3, which is the audio. If you have got a Mac there’s ways of doing it, but if you are not sure, just Google it.

Remember that fantastic company called Google, that little the search box? Just go to Google and put in “how to convert a video to an MP3 for free” and that there will be a million answers as to how to do it, to show you how to.

So then, that is an audio file. That gets uploaded to iTunes. Now the way this works with iTunes is you register an iTunes podcast and then you tell them where to come and look for new episodes.

So you don’t actually send it to iTunes, you put it on your blog on your WordPress blog which you should have.

And this is another reason why we use WordPress and why I tell you to just have a WordPress blog as your website; iTunes will then continuously look and every time it finds a new episode, it uploads it and it uploads it with picture and so on and then it’s a podcast.

That’s how that works, it really is dead simple. So that’s two versions.

This is then sent, the MP3 or the video is sent to a transcriber, you can go to fiverr.com and you will find people who will transcribe up to 10 or 15 minutes for five dollars, it’s great.

When it comes back, and by the way ours generally do this within twenty four hours, they do it within a couple of hours, fantastic service.

It comes back and then you just need to quickly go through it because when you speak like this, ad libbing, your speech is not brilliant, so you just need to edit it so it looks like a professionally written article, but it will be the same words. That becomes a blog post you put that up.

YouTube gives you a code, you just slot it into your post, nothing technical, so now you’ve got it there. You also have the podcast available in your post because you have a player because you’re using WordPress and you have a plug-in which will sort this out.

If you want to know how to do that, just e-mail me at jon@marketingforowners.com and I’ll explain it to you. It’s dead simple even I can do it. So then you’ve got all that.

So now you have, YouTube, Facebook, you’ve got a post, you’ve got a podcast, I’m starting to lose count. Now next within that post, you can cut out some little tweetbles; remember one hundred and forty characters, in fact you want to shorten that so you can get your URL on it and people can re-tweet it. I would probably stick to made one hundred and ten or one hundred and twenty characters so it can be re-tweeted with a bit of comment. And pick out something like three of those, use a service, a free service like Click to Tweet, that’s an automated way of doing that and these can be used. You can then use an image from it so you can create tweets, you can create tweets with images, tweets with just text, you can then do the same on Facebook. You can then share this on LinkedIn and you can write a little summary of what it is and link to the post. You can then do exactly the same on Google plus. Now, how about creating a square image with a mention of the URL of the post in the headline and then putting that on Instagram. You can also go on Snapchat (bless its little heart). Now don’t get me started with Snapchat, it’s up and coming, just take my word for it, I’m not brilliant, I don’t even know how to use it properly, but people are. You can figure it out, you might have a kid who will tell you, you can do all that. Then you can put a bigger image on Pinterest and then, by the way, how about you mention people in the post. So I have mentioned Jay Baer, I have mentioned a Snapchat, I have mentioned LinkedIn I have mentioned Pat Flynn. Why don’t I in the post, link to their Twitter profile when I mention their name, link to their Twitter profile? If they’re professional, they will pick that up, they’ll be monitoring mentions often, they will pick that up, or their staff will pick it up and they may tweet that or re-tweet it or come in and say, “Thanks, Jon, thanks for mentioning me” and mention it to their people, this is what happens. So when I share this on LinkedIn, I will say we discussed Jay Baer and Pat Flynn and link to their LinkedIn profiles and the same on Google plus and the same on Facebook. Now you see how it starts to get everywhere when they share and that’s how it works. Easy, you will be everywhere from one single video that took you 10 minutes.

It’s Tuesday and that means it is time for a toolbox tip. Today, dead simple, Google trends. Free, another Google tool, just go to google.com/trends. By the way, if I mention anything like this, just Google it; lookup Google and just enter “Google trends”, Google knows what you’re looking for. It will find it for you. Look at Google trends, look at your business, your industry, anything else, competitive industries, things you’re thinking of doing and see what happens, see the magic, just go and do it. Click here to instantly download our FREE Book “The 71 Ultimate Marketing Tools”

I won’t tell you any more than that, it’s fabulous.

Tomorrow, remember Steve Chou, fantastic interview, loved it. I will be back talking to you again on Thursday. Well, I’ll be back tomorrow, but you know what I mean.