So what’s all this about that there is no wrong? Remember last week I was telling you about its more than just marketing, which means it’s a whole lifestyle thing.

Now if you’re going to delegate, you have to learn that there is no wrong. Remember when you started working at making your own business, you did things that you had never done before.

Now it’s your business, you had to figure them out, you had to work out how to do it, and how is it going to work.

And if something went wrong, if something didn’t happen, if it’s your fault or someone else’s fault, it didn’t matter. You had to deal with it. 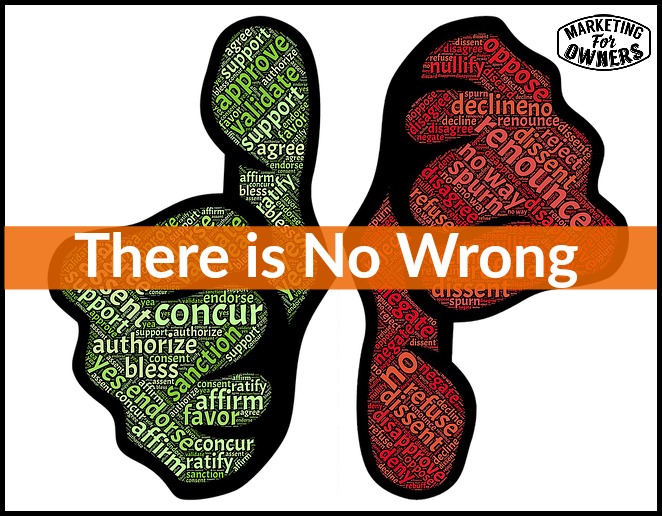 So I would like you to try and think the same for your employees, or your team or your staff. They can do no wrong, because if you criticize what they do and there is by the way, there is constructive criticism and destructive criticism.

We all think we are giving constructive and it’s not always the case.

So if you give criticism explaining why it wasn’t quite good enough and how they could improve it next time, they are either not going to bother next time or they are not going to put any effort in.

They will assume that you will criticize and tell them how it should be done.

Your Staff Will Think Why Try?

Secretly in their mind, they are going to be thinking, why don’t you just do it yourself if I can’t do it right. So let them do it. Let them learn.

Let them get it wrong, let them know how to do it next time. Let them figure it out for themselves.

So if it is wrong, go up to them and say, ‘Fantastic job, I appreciate the effort you put in. it’s not easy. Don’t you worry if you think this is wrong, I am sure, I am sure you will be great next time. It’s all part of learning curve. Don’t you worry. Go for it.’

Because one of the things I learned many years ago when I thought I was good at delegating, was when my staff were asked independently what they thought of my delegating, they said, “Yes great. He gets us to do a lot. However he always tells us exactly how he wants it done. So although he delegates it, he puts it in within a box.’

And that is not good. I thought I was helping, for my experience. But no. everyone has to learn by themselves.

What If My Staff Isn’t That Good?

Now another thing, ‘you may think oh the staff aren’t very good.’ Well hey you hired them, so hire well but you choose people for their initiative, their ability to try, their ability to figure out situations.

I can’t ever remember when I was a little kid, of anyone in the classroom not coming to school because they died, because their parents didn’t look after them properly.

Some parents are great. Some aren’t so good but they all get by. They all do well enough.

Now in my company at Fire Protection Online, I make it extremely clear to all my staff that there are two states. There is good enough for now and better.

And I let them know that it’s up to them to decide if something that can be approved upon. People should be constantly improving but they have to want to improve themselves in life, in everything that you do.

Like that’s what it’s all about. So I can go on and on about it but it is very very important. Do not tell your staff or your team that they did something wrong, okay.

Allow them some leverage, do not tell them how it could be done better next time. Yeah, let them know if they ever want any help or advice.

You don’t mind if they feel they did it wrong, it’s their own decision but you are not going to criticize. If they want any help from your experience they can come and get it.

Tell them they can’t get it wrong. You’ll find an amazing change in people’s use of initiative. And in advance, in your team building your work, your company culture, your work happiness, your staff’s happiness and their willingness to come to work.

There you go, how about that for a Monday. 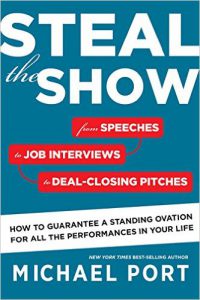 Anyway, it is Monday. So it’s time for Book for the Week. This week, we have got a fantastic one, it’s called ‘Steal the Show’ by Michael Port, and he is fantastic.

He used to be an actor, a real actor, he’s been in Sex and the City and various other things. Read up his bio, he’ll tell you.

But Steal the Show, he’s translated that acting ability into speaking on stage, speaking in presentations and sales presentations, job interviews, all those things.

Imagine where you have to speak to somebody and impress them. Well Michael Port knows exactly how to do that. And that’s what he teaches you in Steal the Show.

It is highly highly recommended. No matter who you are. Even if you are just going for a job interview, or for a college interview or something like that, he gives you amazing amount of confidence. I recommend it.

Go check it out and I will see you tomorrow.