Every Friday I give you a little weekend challenge. Something to do over the weekend and the reason is because I know you.

You are a business owner, you are an entrepreneur and you cannot help but think about work over the weekend. And at some point you are going to be tempted to do some.

So this is something to think about. Think about over the weekend and then dive in and do it next week.

Really it is only 5 simple steps. And the reason I’m picking on email is, well first of all I’ve been talking about entrepreneurship and some things to fix that.

Taking responsibility, telling your staff and your team that they can do no wrong and all this kind of malarkey. 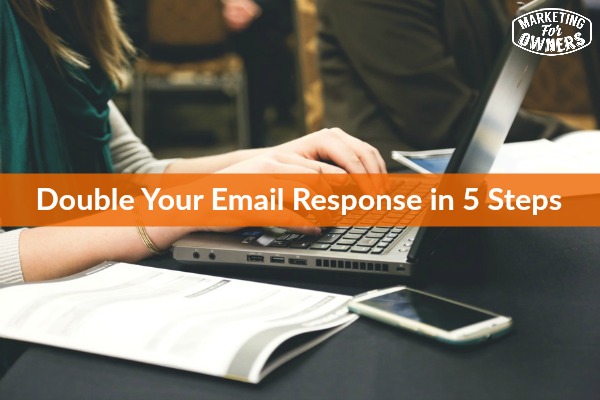 And I thought, eh, why don’t I go back and give you a marketing tip, something or make you more money.

So we all have to use email. We all groan when we think about email. In fact, right now you are thinking Ugggh! Email, because you’re thinking about spam and oh you don’t like getting emails.

But I’m not necessarily talking about auto responders. You know emails from an email service provider like mail chimp or aweber, like I send out.

And it does not take much to improve these. Now believe me your inbox is probably the same. A lot of the stuff that comes to me just gets hit delete or hit spam.

It doesn’t interest me, I have not got time. The stuff that ends up with me, I haven’t got time, if it’s of no interest, I’m not doing it.

So I‘ve seen enough of them over the years to know what works and we analyze our open rates stuff and our response rates.

And by the way what I mean by response is for having people take the action that you desired them to take. whether that’s to buy something, whether it is to pick up the phone, whether it’s to reply, whether it’s to make an appointment, who knows. But to get the response, you wanted.

Rather than tapping into an electronic gadget that will file it away in drop box or whatever and you will never see it ever again. Try this. 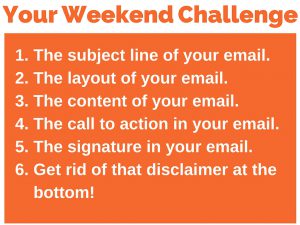 Now this is obvious to many people. But if your subject line is not enticing enough in the first place, nobody will open your email.

So all the rest of my tips will be completely irrelevant so that makes this number 1. That means, if you didn’t catch the drift that the subject line is more important than anything else in the email, in the same way that a tabloid newspaper or a magazine cover.

Be sure to include the person’s first name, which will make it fantastic. It doesn’t have to be at the start. It can be in the middle, it can be at the end but first of all make sure you’re going to spell it correctly.

So for example. My name is Jon, Jon’s spelt J-O-N. If you spelt it John, that is an instant turnoff. If, like someone I noticed earlier used, my official full name is Jonathan.

If you call me Jonathan, you’re going to annoy me. And if anyone calls me Jonathan, I know they don’t know me that is going in the spam. I don’t care who you are. You’ve bought a bad list from someone, I don’t know you.

But if you get the name in there, and make it sound like you are with to a mate, they are going to think, ‘oh this is for me.’

I mean just emails out to people with latest news you want them to know. Don’t say, our Newsletter. People don’t want to read newsletters. It’s boring.

Tell them that it has new regulations, latest regulations, a simple guide, things like that. Things that people think they need to know about.

It doesn’t matter what your business is, think about it. But keep them interesting, keep them short, you know when it cuts off at the end.

I mean different email providers have different number of characters. It’s no good sign because they are going to read it on mobiles, on desktops but keep them short. Try and Keep them to 8 words.

Apparently I read somewhere that that is the magic number. Not always possible but try and keep it to 8 words. And I might add, the shorter the better. Just to let you know, the best open rates I ever have is with the term, ‘Quick question.’

That’s it. Quick question. Who wouldn’t open that? Oh at the end, it would say, ‘Jon, quick question.’ Hmm, yeah. Get me.

Layout format whatever you want to say. Think about your emails. People are going to often read them on mobiles.

If you have some fancy templated email that’s been designed for you by a designer. The chances of it working in every email provider and every single mobile device is small.

Unless you are using an organization such as aweber or mail chimp for email service provider for those type of list response ones.

Then just don’t bother with the template. It’s not necessary. If you are using those, use one of their mobile friendly templates. And do not over design. Still use the basics. Clear images. White space, black text.

But the format. Short paragraphs. Short meaning one, two or 3 lines. Then a paragraph break, next line. To be safe stick to 2 lines and keep them dead short. You think, ‘Oh but that doesn’t work grammatically.’

Don’t worry about grammar. This is not, there’s no police. No one’s going to enforce anything. They just need to make it readable.

Use bullet points. Use separators. Use sub headers. Bold. Use bold, split stuff up. If you have to put images in, put them every now and again to break it up.

The same way as when you are reading a blog post or a magazine article. Look at how they laid out to keep you interested. If you read great chunks of text, uh good luck with that.

If you want to see an example by the way of different layouts, and this is shameless plug but it is free. Go to our course. Free marketing course at www.freemarketingcourse.co, if you go there, sign up there.

Not only is that great and free and very popular, it explains the whole marketing system in 12 days. But you’ll see that’s a big email but look at the way it’s laid out.

Look at the way it explains how the course is broken up, what’s coming, what you’ve gone through. Go look at it. It’s a good example of how to lay out a large email.

If you want normal ones, go to our other one at www.marketingforowners.com/71. Go there. Grab that. Not only is that a great report, been downloaded over 5000 times. Pretty cool.

But look at the emails there. Some are short, some are long. And it shows you again, a kind of format that works out successfully.

And the reason I say they are good is not because I wrote them but because we monitor the open rates and the success of who actually walks through them and reads them. And then we change them up to keep increasing them. So they have been tested and they work.

Pretty obvious. But the content. The content actually has to be interesting, especially if you are going to write an extremely long email.

At Marketing for Owners, there we have the free Owners Club. Member Level. Then if you are in that, you’ll get an email on Monday and that’s quite a long email but it will be broken up and it will be interesting.

It will be something that will not waste your time. If you read it through at the end of it, with a bit of luck, you will say ‘Oh, that’s handy.’ So try it.

So content has to be good. But it can also be dead short. You can say, ‘Hey quick offer I got couple of spaces open up. Go to this page to find out more. First come first served. Jon.’ that will work. Got some it for sale.

Every email needs to elicit a response like I just said. Click. Go to this page on a website. Tell them at the end what you want them to do.

By the way if you can hear the kids, it’s the end of school and I’m recording this out in the garden because it’s sunny. Those of you watching this on video know this but yeah we don’t head them out, kids. We like kids.

Yes your signature. That is your opportunity. This is so simple. Just go to. Don’t pay someone to have something that just doesn’t display and the images they put, different images on and places attachments and stuff.

Just go to www.wisestamp.com, loads of people use it. We’ve used for a long time. It’s fantastic. I have even written for them. They are a great company.

It displays all the fans, all the lovely neat ones, a little picture, a little logo. It’s got your name. All the formats laid out.

We have it, at my fire protection company, so everyone has a standard signature that we control and they can’t control. But you can also pop a marketing message in there. You can link to your social media and it’s pretty.

Its darn, they got loads of templates. Its aah, it’s great. And it hardly, I think they got free one, but they also, for the paid one, it’s just a few quid a year. Don’t worry about it, all worth it. Do that.

Now as you know, I usually over deliver so there is a number 6. This is for all of you who have one of those footers.

One of those disclaimer images, footers that is about yay long and it says this content is for the person who designated any whatever whatever. Please get rid of that. Who told you to have that? A lawyer?

No of course if you are a legal company and you have to have them and it’s in the rules, fine. But who told you? Who said you have to? Who knows?

Do you see them online? Do I look like I am in prison? Why do you need those? They put people off and then they you get the attachment at the thread one after the other and it’s got five of them at the bottom, it’s like a foot long at the end.

What is all that about. Do you even know why you’ve got it?

If you have to have disclaimer, put it on your website. Just put a little link that says Disclaimer. Get rid of that. That is putting people off.

And you don’t even know it. Do you think everyone else is breaking the law? Have you asked, and the person you asked, what do they know about it? Are they the email police? Yeah, really? Do they know, you are saying web designer, really?

Well I’d question that. Please just get rid of it. If you feel you have to, you can’t help yourself. Link, disclaimer that was it.

That’s your bonus 6. That is it. Sorry it’s a bit long one but this will work. These are easy easy adjustments to every email you ever send, it will work. have yourself a fabulous weekend. I’ll be back on Monday.