It’s Friday and the weekend is coming and I’m hoping it’s going to be sunny again because I am back indoors.

By the way, if you’re wondering, I am in Canada now. The other day I was in Deal on the beach in England but now I’m roughly 5000 miles away.

It is what some would call the Internet lifestyle, I have no idea what that means. But the reason is because I have created a self-managing company that is also self-marketing.

So in other words, although I still run the business, it’s been mostly on and I do turn up, I haven’t abdicated my responsibilities, the business runs, I do not hire, I do not fire, I do not set the rules, I do not sign checks. And I don’t actually do any of the marketing set up anymore.

It’s my job to be the visionary, the chairman, the president at the top and it’s my job to come up with strategy and then my team, my staff, as fabulous as they are, put it into action. 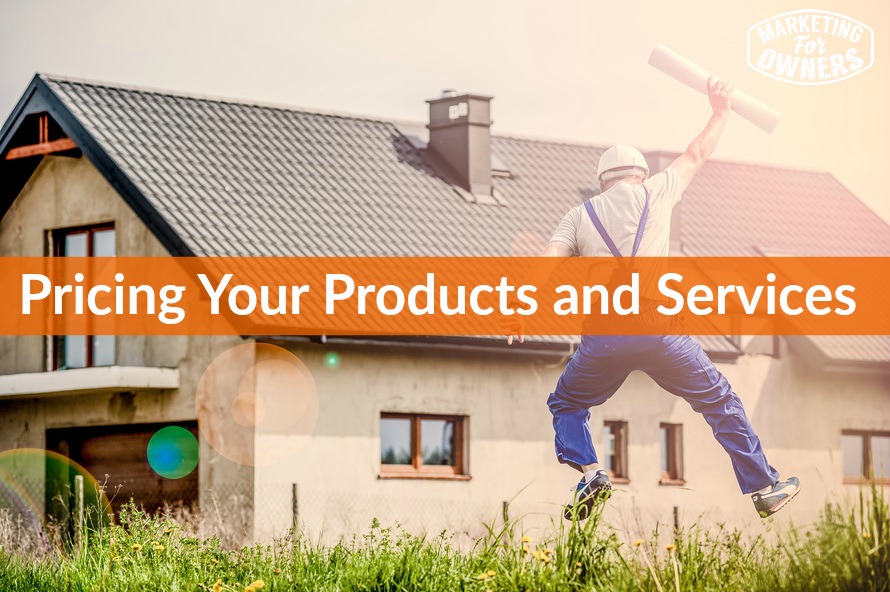 This you can do too with the little tips I give you at marketingforowners.com. Also, you’ll find The Owners Club there.

Now The Owners Club is for business owners and for people who run teams, we don’t check if you are owner or not.

But generally for small, medium sized business the owners would need to know some tips and tricks of modern marketing and modern ways of running a business to make it easy so that that you too do not have to stay up after night working and working weekends, stuff like that.

Anyway, today we are talking about pricing. A lot of people ask me about advice for pricing and set up.

And by the way, it’s Friday so it’s a weekend challenge so while I’m talking, grab yourself a pad and a pen or a piece of paper and a pencil, whatever, but preferably not electronic, preferably something to write down.

So, pricing. With some it’s not as simple as this. So if you are Tesco’s or WalMart, this isn’t going to apply to you. But for the majority of us, 99% of the rest of us, this works.

#1 Do not Round Up or Round Down Your Prices 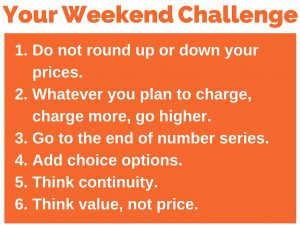 If you are a gardener or a painter and decorator or a builder or something like that and you come up with a price for someone and if you work it out it comes to say £907, don’t just say, “I’ll do it for 900.”

Or if you come to something that is around about 1000, don’t just say it’s £1000, because the reason not to round up or not to round down in that way is because the person at the other end things you just plucked the price out of thin air.

But if you say, okay, I’ll do a bit more, I’ll round it down, that lessens the value because what you are saying is actual prices it comes to £907, but the money means nothing to me, I’ll just knock off £7.

Please, trust me, this isn’t stuff just being made up off the top of my head, this is stuff that works.

#2 Whatever You Plan to Charge, Charge More, Go Higher

The reason for this is because you’re going to say “Well, that won’t work in my industry.” And I’ll be blunt here, I and many other business advisors and marketers are so tired of people saying “Oh, it’s, different in my industry.”

We come from all industries, all of them. I sell fire extinguishers online in a product area that has been commoditized.

In the UK they are red, they are shiny, they have the extinguisher mark they’ve all got five-year guarantees.

Quite often other people selling online are buying from the same supplier and they just undercut. How come we sell more than anyone else?

We purposefully, if everyone else was say £25 for a product, we would sell it for 27 and we’d explain why, we don’t just go on price.

The prices in your head, I’ll tell you something about being cheap. So I’m going to ask you, how many people in your trade are selling products, in your trade?

Of  course I can’t hear answers, but say you are saying five hundred, a couple of thousand. Okay, all of those, only one of them is the cheapest, one, one single person is the cheapest and there are others in your vicinity.

But all the others have got customers, including you. You are not the cheapest. As soon as you go cheaper, someone will undercut you.

Also, I’ll mention that the most expensive one also has customers. So price is in your head until you have met your customer and told them how much it is, they have no idea.

Charge more; if they say no, that’s too expensive, drop your price. But just trust me, send an e-mail with “Thank you” when you find out that that makes you more money and you don’t have to work so hard. Honestly.

#3 Go to the End of a Number Series

Instead of charging 929, charge 999. You’re just wasting, it sounds the same to the customer, they didn’t know how much it was before you got there, so don’t round up to 100, but go up to the end, go up to the end of a series.

And suddenly, no isn’t an equation. No obviously some people will still say no, but you will be surprised.

There are lots and lots of examples of this, the most common one is for instance where someone sells an online product and say it’s a video recording or something like that and they sell the online one for $19.

Then they say “You can buy the physical product, we will send it to you as a DVD and that will cost $39. That’s an up sell.

And then lastly, have the CD and the instant online version right now for $49. Most people in that case would be thinking, I think people would like to go for the middle one, the CD, which makes you more money, but then they are going to think, “Well for another $10, I can get all of it.”

And you might be thinking, “Huh. Isn’t that the same?”

But believe me, people will buy that one, otherwise if you just gave them the download for $19, they all buy that, of all the people that buy, some that buy.

If you offer anything as a product or as a service, try and get someone to pay a regular price to have you come back regularly.

If you sell a hot tub, offer a price to come and empty and change the water quarterly, or to service it.

Believe me, I had a hot tub, people get bored of doing that and will pay, I use myself as an example, we do pay someone to come and do it and we had all the equipment including the pump.

Now I think this is a Warren Buffet quote, “Price is what you pay, value is what you get.” And that is that my friend.

Your customer will buy value, they will pay what you tell them to pay, they will perceive. Instead of buying a Ford Mondeo, lots of people want to buy three series BMWs and C class Mercedes.

They’re going to cost them five or £10,000 more, it’s the same thing, it gets them from A to B, but they have done a good job in exuding luxury, it’s the same.

Fords are brilliant nowadays, I don’t have one, but Fords are great. The people want to buy the extra because they have been told it’s great, you can do the same.

Convince them of the value you offer, don’t just base it on the price. Simple.

And those are my tips for pricing. There are many more that will help you. This has been a bit longer, so I’ll get straight off. Have yourself a wonderful weekend, I’ll be back on Monday.