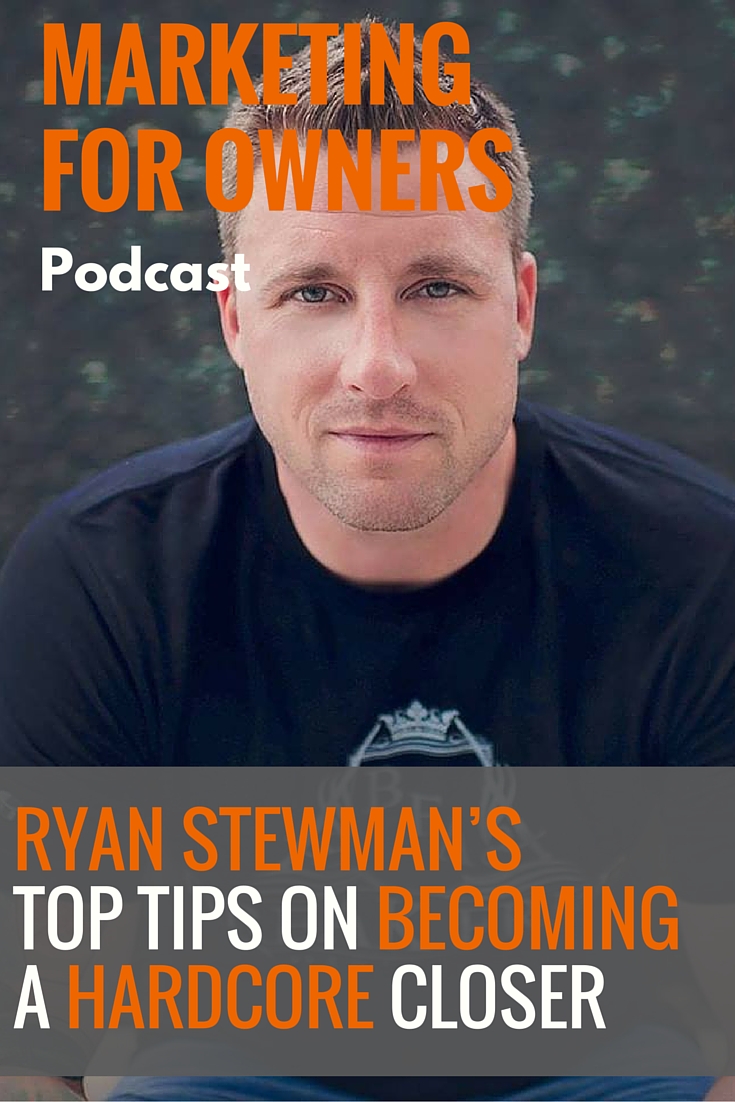 Ryan Stewman is known as the Hardcore Closer and has earned his nickname by becoming one of the best salesmen of a generation.

He may not have any fancy qualifications or gone through life down the easy route, but he has absorbed every experience like a sponge.

You can tell from the way he talks that he’s never let anything get the better of him, and has become an inspiration to so many.

Despite dropping out of school in the 9th Grade and having a couple of brief visits to prison, he is the guy everyone goes to when they want to become a better sales person.

In fact, he has helped numerous people to achieve 6 and 7 figure incomes.

He’s a natural. And thankfully he shares his knowledge with the world through blogs, books, podcasts and online training. All of which can be found at his website Hardcore Closer.

But before you go off and spend the rest of your day on his brilliant website, stick around to find out the lessons he has shared with us today.

How to Become a Hardcore Closer

Everyone Has To Start Somewhere

From the age of 10 Ryan has been somewhat of an entrepreneur. He washed cars and mowed lawns in return for a little extra pocket money.

By the time he dropped out of school, he was no longer washing cars and instead the one trying to sell car washes.

He was managing to get between 1,200 and 1,500 cars to the car wash every day. Perhaps managing around 150 pitches every hour.

That obviously means he was talking to a lot of people every day. And that meant his pitches would have to be persuasive and succinct enough to get the sale in just 20 seconds or so. 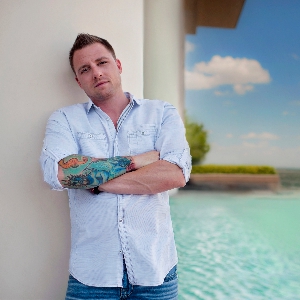 But he also would have gotten used to rejection, which is an important thing to get over when you’re in the business of sales.

It also means he made $35,000 in the summer he left school, which is something not to be sniffed at, and he states that it’s probably more than his teachers were making.

And by plying his trade, he was soon offered a job by one his customers in the mortgaging world.

School wasn’t really for Ryan. And after being labeled as having ADD (Attention Deficit Disorder) and regularly getting in trouble for ‘being the smart kid’ who always had his hand up and knowing all the answers, he’d had enough.

From a young age, people had already noticed that he was natural born salesman. By dropping out of school, he was able to pursue his interest and get even better at it.

Like many other people in sales, he’s had no formal training on the subject. Everything he knows is from his mentors and from personal experiences.

It was at 16 when the manager at the car wash gave him a Zig Ziglar audiotape (those plastic things with two holes and some tape inside, remember them?), that he decided sales was what he wanted to do. College didn’t interest him.

He realized just how proud Zig was of being a salesman, and how prolific he was at helping people. He installed a way of life for Ryan, which he still lives by today: 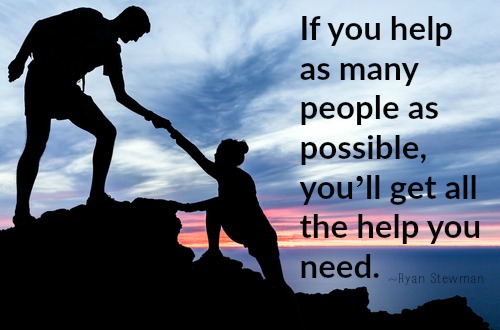 For other people, it may be the books of Donald Trump or their first manager at work which may have given them the knowledge which sets them up for the rest of their lives.

After all, if he’d gone to college to learn about sales, he wouldn’t be learning from people who are experts in their field. If they were, then they’d be selling and not teaching.

And also, the reason people are in sales is because they didn’t get a fancy degree. The ones who did are the CEOs who are earning less money.

But even now Ryan still strives to learn more. There’s always new stuff out there and different approaches. And that’s also why he has all his training courses for other people.

As sales people, you owe it to the marketplace and the products to always be learning so you can sell even more.

He may not have an education in the traditional sense, but he definitely knows what he’s talking about.

He was in prison at 21, divorced at 23 and bankrupt at 24. Then back to prison at 27, and divorced again at 28 and 35. It’s not a life that’s gone smoothly, but Ryan thinks of it as strength conditioning and has learned a lot of lessons from it.

And if he hadn’t have gone through all that, he would not be the person and respected voice he is today. Plus it is his journey which motivates other people going through a tough time to see the light at the end of the tunnel, and get life back on track. 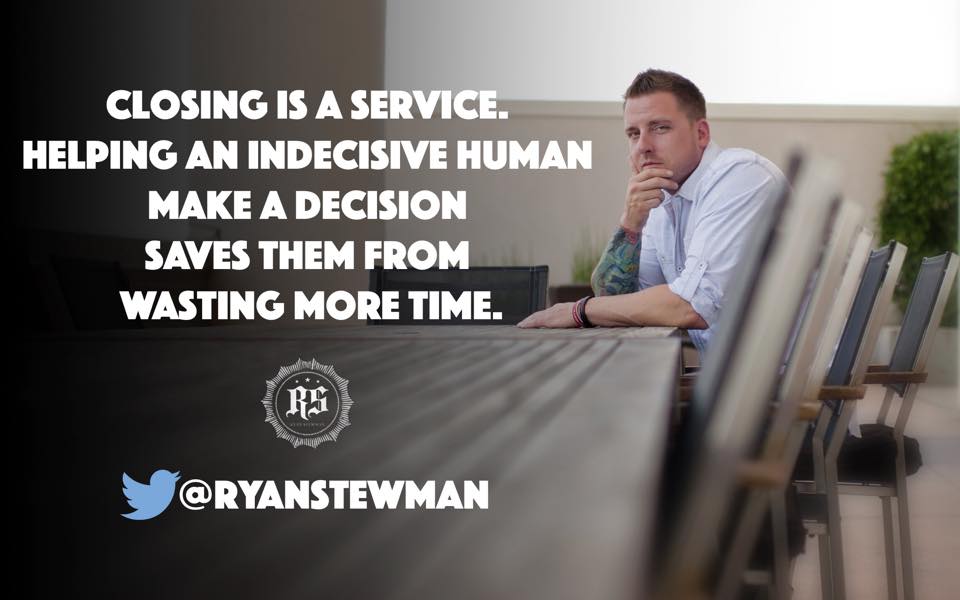 Through his blogs and books, he is inspiring people. They can connect to him through his experiences, and is refreshingly transparent and honest.

And that’s thanks to him being his own boss and having no licensing body whose rules he has to abide by.

Believe it or not, humans don’t like to say ‘no’ to other people.

Objections are not a ‘no’. When someone says that something is too expensive, they’re looking for a deal, and it is, in fact, an opening to a sell. They’re telling you that they want to, but their finances won’t let them.

It’s at this point many people might cut their losses and decide to leave it there and try someone else. You turned it into a no by not continuing the conversation. Perhaps you could have struck a deal? Or perhaps you didn’t fully explain the benefits that make it worth their money. 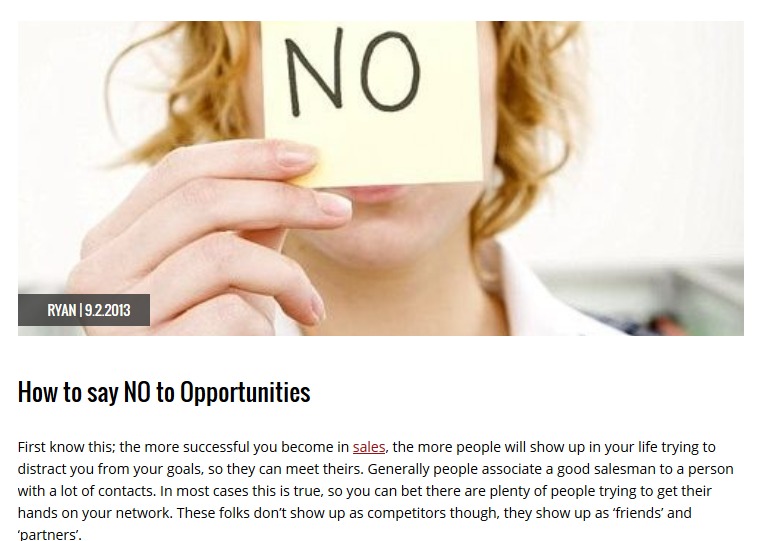 People are scared of receiving a no when they sell, but the reality is they’ll rarely hear it.

But you need to also be careful about the vibe you’re giving off unintentionally. If you’re a penny-pincher when you buy, that same feeling may get passed to the person you’re attempting to sell to.

It’s also worth noting that dead air isn’t a no either.

But nor is it a reason for you to just keep talking.

People in sales who are struggling are probably talking too much. It is often the case that the person who says the least is the person who wins the negotiations.

Instead, you need to listen and let them become the talker by asking questions.

No-one listens to anyone else these days, so you’ll stand out and make a pleasant change from usual sellers who have the gift of the gab.

Perhaps don’t turn it into a therapy session for the customer, but get them to tell you about their problems. Listen and become empathetic of what it is they have to say.

Chances are, they’ll either feel much better that you’ve already proved your worth to them. Or they won’t want to tell their problems to someone else, so will buy from you so they don’t have to.

The tactic of jabbering on until the other person gives in isn’t productive for anyone. In fact, it’s almost a form of torture. 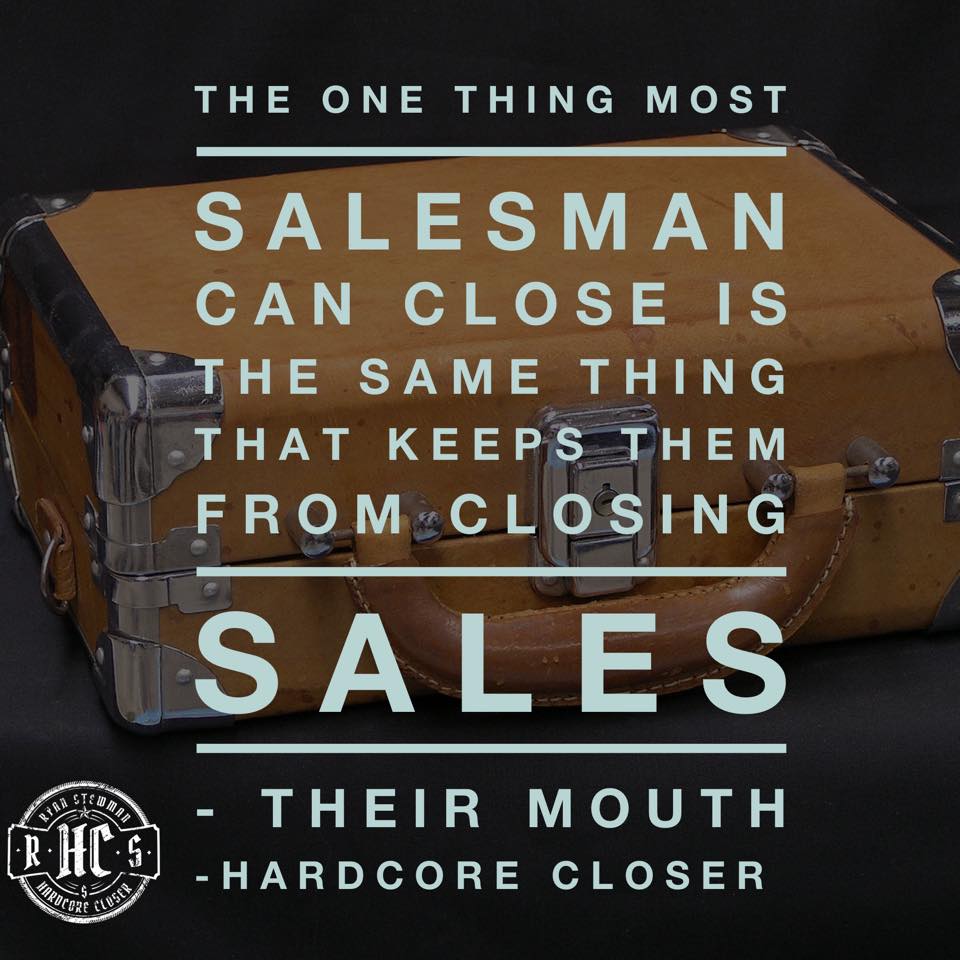 When you go on a date, you want the other person to have a genuine interest in you and looking forward to it. You don’t want them to have surrendered. You may get that first date, but you won’t get any more.

The buyer needs to be excited to receive your product or service.

And after all, the people who give in to you are more likely to complain and ask for a refund. If they start the transaction disappointed, they’ll finish it feeling exactly the same way.

When something works and makes you feel more positive, you’re going to want to go back and buy something else from that person or brand. And having a relationship with the customer is far more important than getting that one-off sale in the bank.

But a sale, much like any relationship, starts with a first impression. In this case, it is often through some kind of marketing, such as seeing a post from you on social media.

This is the first touch, and it generally takes 8 to 12 touches before anything is purchased and money exchanged. These could consist of emails, phone calls, social media posts.

People are generally not ready to close a deal straight away. They might take the time to talk to their loved ones and pets first, or do a bit of research using search engines.

Whatever the case, you need to be creative with your efforts, not aggressive. 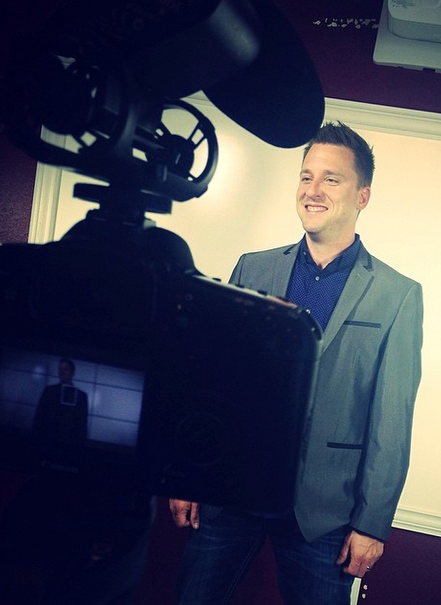 Anyone can try and be a salesperson. But the ‘closer’ is the guy who, at the end of the day, gets the check and walks away victorious with the money.

The close of any deal, whether it’s a sales pitch, email or sales letter, is the most important aspect. Selling is the process, but the close is the grand finale.

Change With The Times

The internet makes the process of selling a lot easier. But in turn, that means people are used to receiving sales pitches and will instantly put their guard up.

But when someone isn’t ready to make a purchase yet, you can make the follow-up move a lot easier and more convenient.

You no longer have to go back to their home or ring them up a week later. Often, you’ve caught them at an inappropriate moment and your efforts were wasted.

But with social media, you can keep taking shots and generating leads. And if it doesn’t work, you turn around and try again the next day to influence them. You can carry on the conversation for as long as it takes. 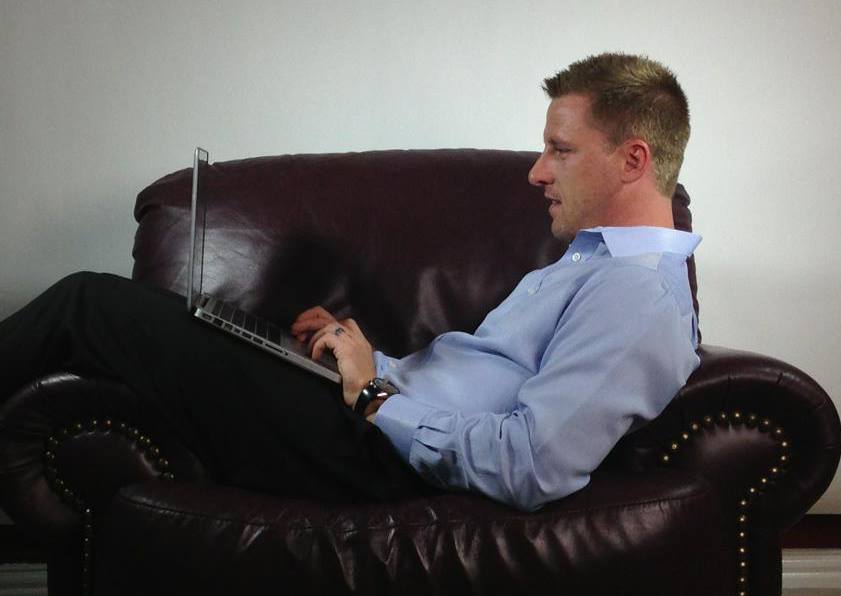 Plus the internet means customers are far more informed. There’s no pulling the wool over their eyes. They can search for your business and products and find lots of people with objections to you.

So you’ll want to make sure when someone searches you, they see as much positive stuff as possible.

Ryan lives and dies by his schedule. It’s how he gets so much done. Even spending time with his family is on his agenda . Anyone who wants any of his time needs to get on his schedule.

He has a plan and he gets it done. It’s far better to set aside time to do something, rather than just adding things to your ever-growing to-do list. Just get it over and done with.

But even after all his success, he’s nowhere near where he wants to be. 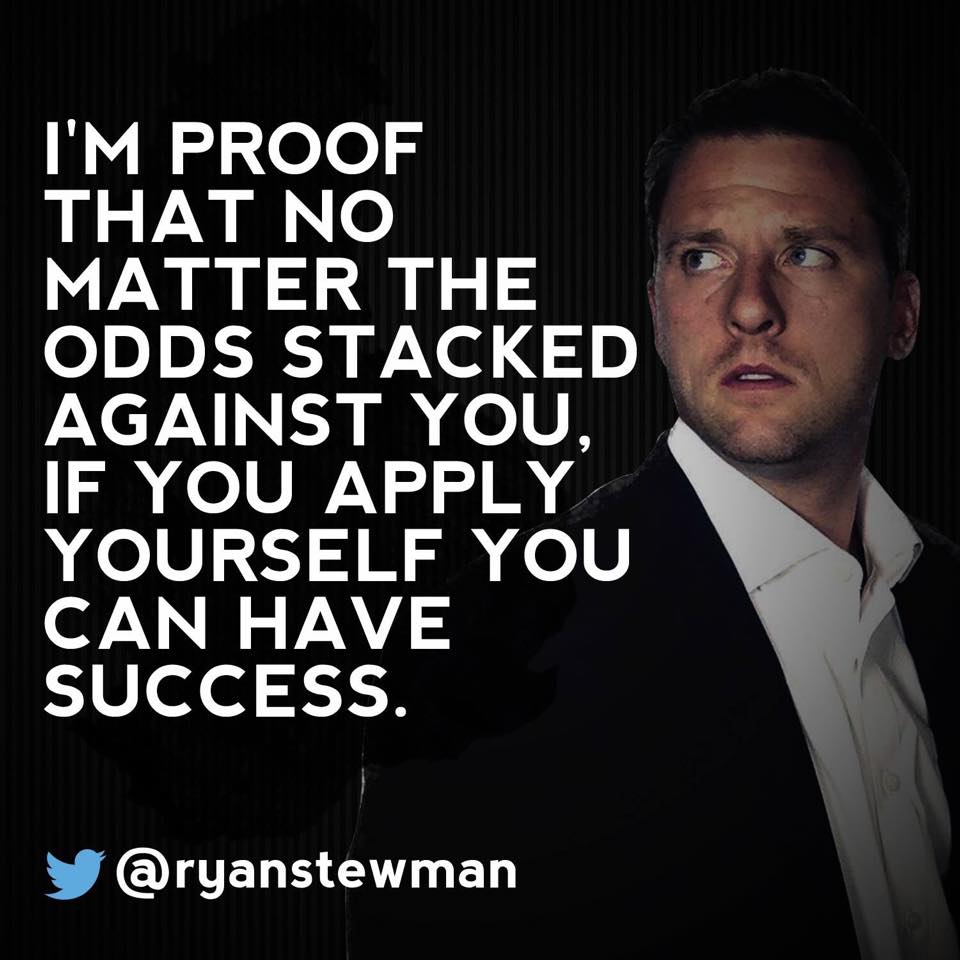 It’s natural to, as you get close to your target, decide you want more. He hopes to remain unsuccessful so he always has something to strive for.

His goal posts are always moving, and he’ll carry on chasing the ball towards them for many years to come.

Ryan believes he can sell anything, as long as it’s ethical and makes sense. You need to have confidence in what you sell to do it well. And now you understand why he is known as The Hardcore Closer.

He teaches everyone how to do this through his training program Show Up And Close. When you let him into your head through his audio and video, he’ll fill your head with subconscious selling habits.

In 30 to 60 days he’ll reprogram your mind and help you to also achieve that 6 or 7 figure income. An affordable solution which will quickly earn you your money back.

But when you visit his website, you’ll find lots of blogs, products, books, podcasts, free online training programs, and a lot more besides. At Ryan Stewman’s Hardcore Closer website, you’ll find everything you’ll need to become a better salesperson and close every deal.