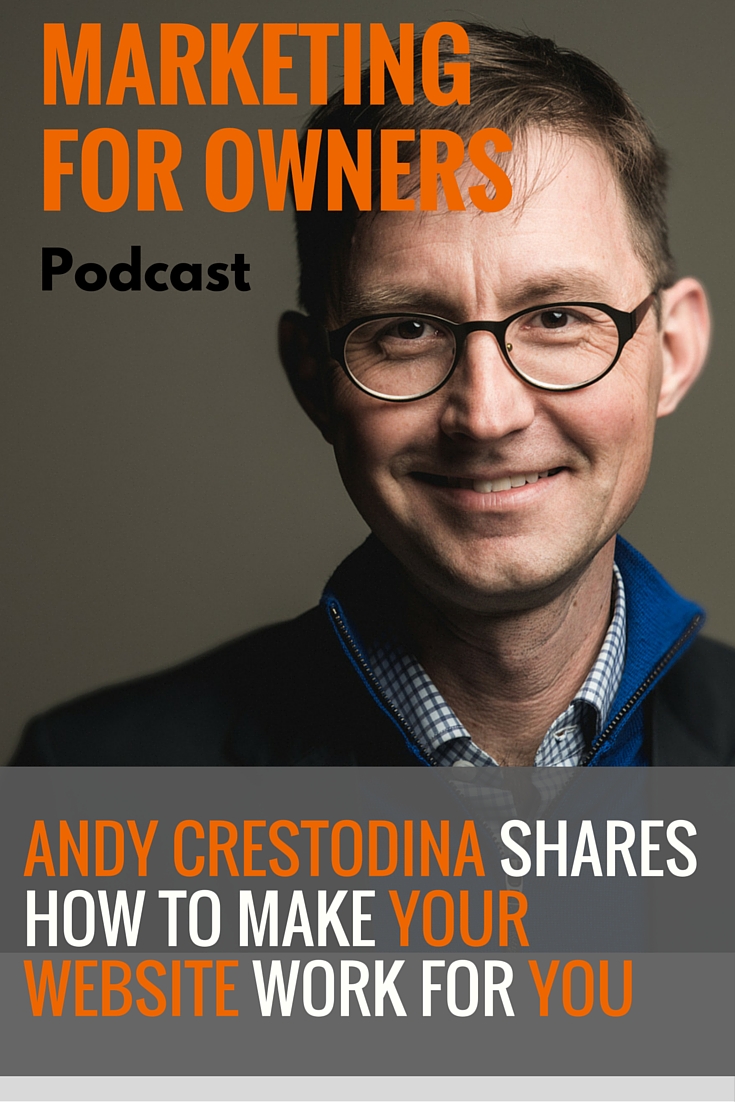 As co-founder of Orbit Media Studios, Andy Crestodina has watched the internet evolve since he started building websites in 2000. And during that time, his job roles have also changed.

Technology is constantly evolving, and it opens up new avenues for marketers to do their thing, and more data to understand how well it works. But it also forces them to change with the times.

That’s why many people in SEO have rebranded themselves as Content Marketers.

Now he enables us to create successful websites and to give our audience exactly what they want. Websites need to work in favor of your business, but it’s also important to remember that it will be your customers who will actually use it.

Andy says that the purpose of a website is to get visitors. Then once they’re on the website, it then needs to convert them into customers.

Thankfully he is a fountain of knowledge, and he shares with exactly how we can put our websites into good use.

Do What You Do Best

In 1997, Andy was living in his mother’s basement. With a foreign language major, he’d become certified as a teacher and had spent some time living in China.

But whilst working as an IT recruiter, he created an interactive comic book with his friend at night. Although it was perhaps a terrible business idea, they had fun and gained experience using multimedia tools. But this was the birth of Orbit Media Studios.

Finally in 2000, he was able to quit his job and together they started to build websites. Andy was in charge of design, and Barrett Lombardo the programmer. Together, they began the long march of building the business.

Over time, Andy was able to hire web designers better than him. He kept taking off hats until he was just in charge account and project management. It wasn’t long before he then started to do just sales.

It was when they hired a CEO that he finally became the marketer we know him as today.

He may no longer be the person in charge of the business, and handed over much of his control. But that enables him to focus more on the things he wants to do and create long-term goals.

Andy no longer has the worry of having to always make pitches in order to put food on his table. He is liberated and has the freedom to spend his life enjoying what he does.

How To Start Out

Andy understands that it is becoming increasingly hard for someone starting out to learn about content marketing. In part, that’s because the world of marketing is constantly changing.

It moves so fast that sometimes new courses are out of date by the time they’re even available for people to purchase and learn from.

But there are also so many different people in marketing who want to teach you everything they know. So it can be impossible for someone to decide who to give their money to, and who will give you the best value for money.

Andy has some great advice for anyone just starting out. As entrepreneurs, we’re used to going it alone and struggling by ourselves. However, there is no reason why you should. 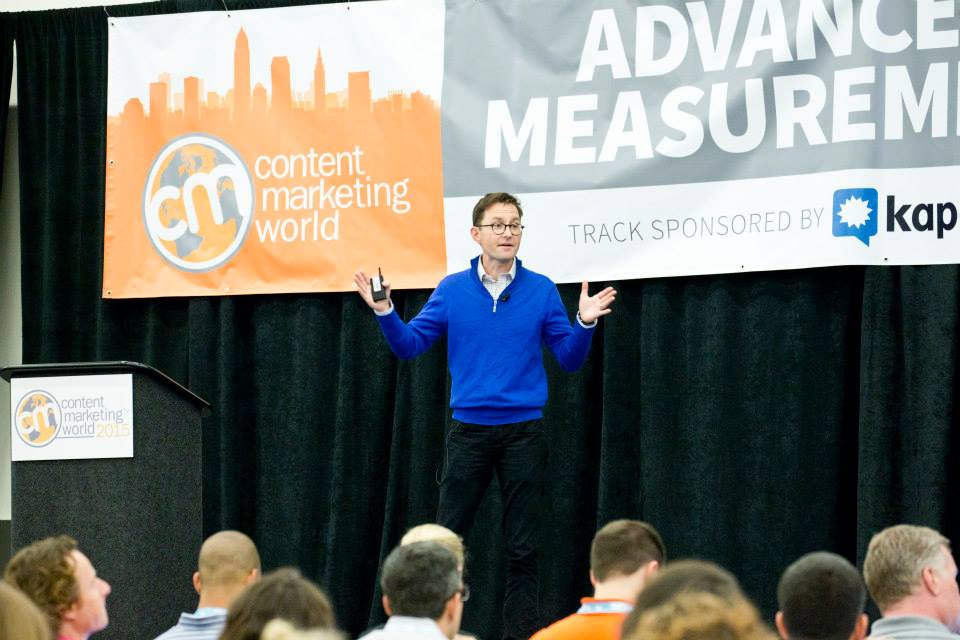 At school, we had groups of other pupils trying to learn. So you should try and learn in a similar environment now.

Put together a small group of marketers who are in the same position as you. Perhaps you could then all share what you’ve all learned every month or so. You can share what works, and what doesn’t.

You’re far more likely to succeed if you have a support group around you.

The Internet Has Grown Up

Since its infancy, the internet has changed a lot.

When Andy started out, it was common for websites to have an animated introduction which you could skip. And others were full of weird and ‘fun’ animations, along with annoying sounds.

You can relive the internet of old, click here if you think you can bear it.

Designers were paranoid of making their users scroll down the page, Google wasn’t dominating, and Google Analytics didn’t exist. Content marketing wasn’t heard of and websites were effectively an online brochure.

Now psychology plays a massive part in decisions, as does the analysis of data. Pages are taller and have a lot more visuals on them.

The internet is generally a lot faster than it ever was, but websites have increased in size as well.

Overall, design has simplified and the content philosophy has changed. The idea is to now be useful and educational.

These changes have been driven by a combination of factors.

The Challenge For Modern Advertisers

It has become far easier for people to avoid adverts. People join lists to stop telemarketers bothering them. People download ad blockers to prevent banner ads from appearing on websites.

And people fast-forward through the adverts when they watch their favourite program on the TV.

But when we go on the internet, we expect to have our questions answered within a matter of seconds.

So as a result, advertisers now focus a lot less on creating adverts, and more on producing content.

Google provides such a rich list of search results of different media types. And people rely heavily on getting their recommendations from social media.

Online, we talk about the things we love, which means we’re inadvertently doing the marketing for the brands. So they also try hard to get us to share our experience with everyone else. 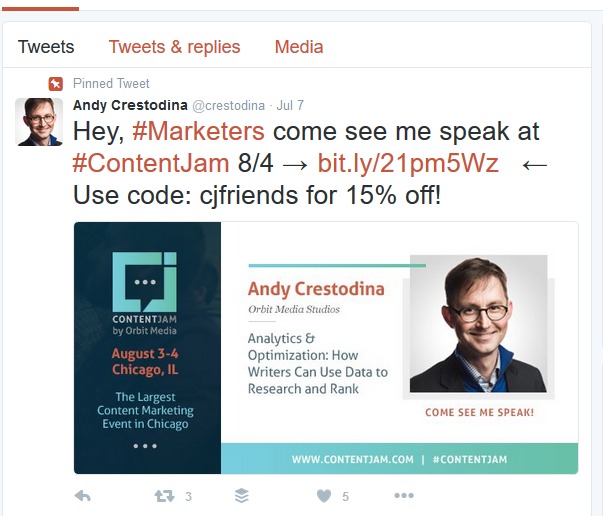 But content marketing has been around for many years in different forms. One example which is often mentioned is the John Deere tractor manufacturer which publishes a magazine full of useful information for farmers.

But a less common example which Andy cites is the Michelin restaurant guide. Produced by the tyre company since 1900, it is another way which the brands adds value for its customers.

In a time when we rely so heavily on Google to send us to the place we want to be, is SEO still important?

But you must remember that people may use different language to you. So it’s essential to ensure that different phases for the same thing all point in the same way.

For example, Eskimos have 50 different words for snow. So if you were running a website for Eskimos, you would have to make sure that no matter which word they used searching your website, that they all send them to posts about snow.

It’s important to make sure your articles are ranking for internal searches visitors are making. 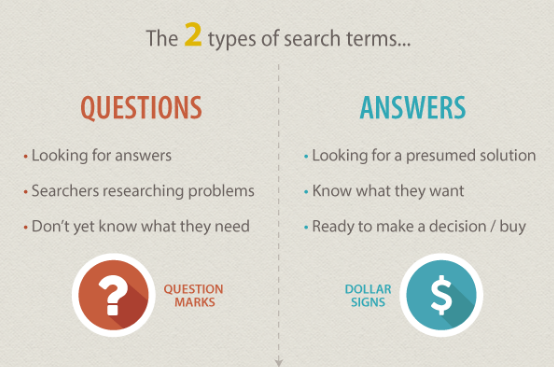 Click here to read an article from Orbit Media about SEO

Website searches are important as it helps users to navigate the massive library of articles on your website.

But of course, if you have an article which you think would be really useful to potential customers, then it’s your job as a responsible publisher to get out in the world and ranking. When someone Googles your keyword, you’ll want that article popping up. Because when you get people on your website, you can start to convert them into your customers.

The purpose of every website should be to interest people, and to then turn them into customers.

It may seem obvious, but it is something which many businesses are getting wrong.

When it comes to designing a website, people make decisions based on their personal opinion, rather using data and incorporating SEO.

Thankfully, digital ink is never dry and means a website is never finished. Think of your website now as another stage in its testing. You can try new things, and when they don’t work, can easily get changed back.

But when you’re designing a website, it’s important that it should be designed for the customer and not the brand which has their name on it.

And you shouldn’t keep putting off going live with a new website. As soon as it’s better than what you have now, it should go up.
That gives you data which will help you with future developments which you’ll make on the website.

But with the speed which technology changes, you’ll want to be careful of it going out of date before you’ve put it online.

Because the world of content marketing changes so quickly, Andy will soon be releasing the 4th edition of his book Content Chemistry. As tools come and go, update, and tactics change, the book needs to evolve with it in order to stay relevant. So if he can manage to update his book, you can make a few alterations to your website.

Andy is also hosting a conference called Content Jam on the 4th August in Chicago. You’ll get taught all the things which will get visitors to take action, such as creating and promoting content.

But it will also feature different elements of content marketing, including email and social media. His conference is like a website full of different pages full of information.

Speaking of which, you can also find some his best advice at the Orbit Media Studio blog. Although he may only write an article every 2 weeks, he has an entire back catalogue for you to get stuck into.

Plus other members of his team write great articles too. So that promises to keep you busy for the rest of the day.