Hello it’s Friday and it’s time for a weekend challenge. This is where I, me being Jon Butt on the Marketing For Owners podcast, give you something to do over the weekend.

Let’s make it something that will improve or grow your business and give you more time off in the future. That’s how it works hopefully, if you’re listening.

So, Each time we give a little five/six step challenge. If you want to see them all go to marketingforowners.com/challenge and I think you’ll find them all there.

If you go on the website look on the menu under “resources” or something like that. There’s loads of good stuff on there by the way. Look on that website, Ah you like it. Anyway, very basically I want to ask you: Would you refer yourself?

So, in other words: Are you or your business or your services, are you suitable for referrals? Because part of growing a business is to have people tell others they should use you but if you aren’t referable that ain’t gonna happen.

Why not? Let’s look at it. By the way, I have to admit this is all thanks to the fabulous coach Dan Sullivan of StrategicCoach.com you can look up all about him there. 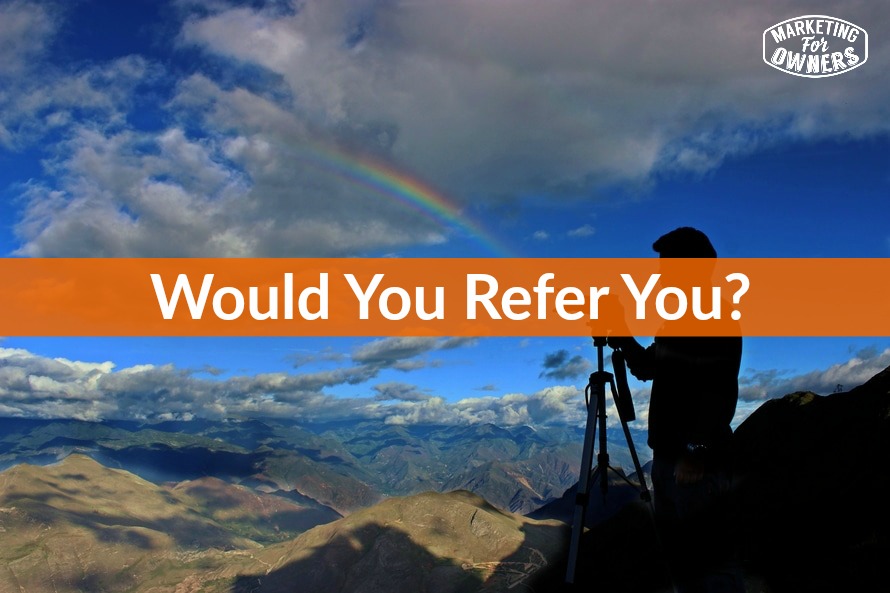 This is a mixture of his refer-ability habits with a couple of others and the funny thing is, one of these thrown in was, I was talking to somebody recently and I embarrassingly cannot think who on earth it was.

If it was you Jock, thank you. I have a feeling it might not have been. It might have been someone at a trade show that I was talking to.

Thank you very much, If you are that person and you are listening, Hello friend. Sorry I forgot but text me, e-mail me, tweet me and I’ll do something for you in exchange. Anyway they gave me an extra one to add on to this.

Get your pen, get your pad, whatever it is, we’re going to write this down. As always if you cannot write this down you think “oh gosh Jon I’m jogging” or “I’m driving” or “I’m doing something else that you can’t even publish online ‘because this is a family friendly one” then you can catch it later in the notes at MarketingForOwners.com/podcast/425 .

You’re getting the pattern of this aren’t you? That is how all the show notes are done. You can find them all there. You can get all the notes for this. Are you ready? 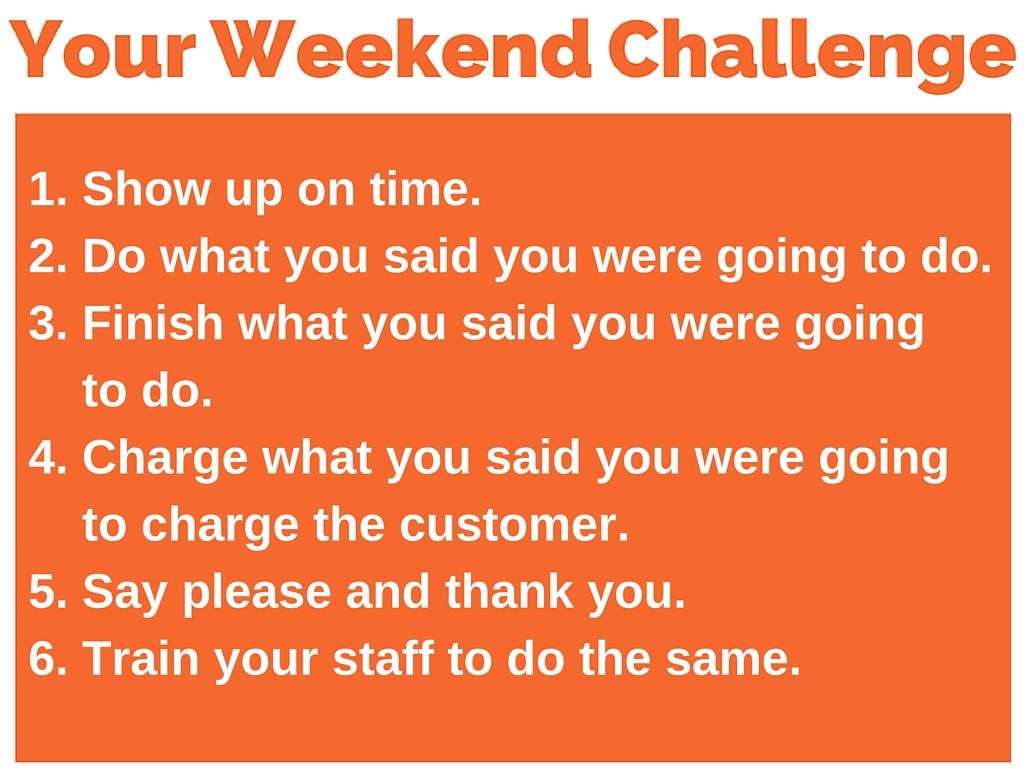 Many of us are thinking “Great, hardly rocket science Jon” but tell the plumbers, tell the people who have said “I’ll be there at your home to fix something at your home in the morning between 8 and 1 or something like that and you think “What? I have got to wait in all morning”?

Then they don’t show up. Then at two o’ clock, three o’ clock you think “are they coming?” Show up on time. Give a better idea. Phone up to tell people… That old “I’ll be there in the morning” is old hat.

Delivery companies can give you an hour’s time slot, they use technology.

You have a mobile phone nowadays so, if you’re visiting six people say “Just to let you know I’m more likely to be with you after eleven because I’m at the other end of town on the first few calls” something like that.

If you’re then going to be late phone them. If you’re stuck in traffic they are going to find out you’re late at some point.

Phone them and say “Sorry I’m going to be roughly two hours late because…” tell them why and warn them. Then they can go out and do whatever they were planning on doing. Don’t mess them about. Plumbers please listen.

#2 Do What You Said You Were Going to Do

Do I really need to explain that? If you told someone you’re going to do something, do it. There you go.

#3 Finish What You Said You Were Going to Do

Yes, builders, construction people do not do that thing where you do two thirds of a job and then you go off and start another job and then you leave people in the lurch thinking “What happened?

When are they coming back? Because you want to keep a load of people happy at one time. It’s not how it’s going to work. This is the 21st century. We have social media. We are going to tweet.

Yes and on forums, don’t even of looking at, yes. So, finish what you said you were going to do.

#4 Charge What You Said You Were Going to Charge

The money. Don’t at the end of it say “Well I had to use a few more things so it’s going to cost you another 50 quid”.

You will over estimate slightly perhaps. In fact if you want, by the way, you can over estimate and give people money back or reduce it at the end but do not charge more.

Just don’t do it because people will be annoyed. They will not use you again. They will not recommend you to their friends because they don’t want the embarrassment of their friends saying “that person never turned up, took them ages to finish and they charged me much more than I expected”.

Yes, be polite. We, the customer, the person that’s paying you have invited you to come and practice your services on us, on our property, whatever and we are paying you our hard earned cash.

Please be grateful. Appear to be polite and civil and nice. If we don’t quite understand, If we’re annoyed that you’re late that’s our right. You should have turned up on time or phoned us.

Don’t you get all uppity. Recently I had in my flat… the people were replacing the intercom system.

The person that was sent was from overseas, I mean he was a UK worker but his English wasn’t good enough to explain a problem to me or I couldn’t explain to him. Now that is fine.

I have no problem with that whatsoever, really nice guy but he couldn’t understand. So, he phoned his boss who is at the office who translated and sorted it out for me.

His words to me where “make sure you have him do everything you need him to do, make sure you’re happy because he’s traveled a 100 miles to do this job and he won’t be coming back or he will be charging you to come back and get anything right.

I said “sorry I will try my best to explain but he doesn’t understand what I’m saying and it’s not my fault he came a hundred miles. It’s not my thing.”

And the guy then had a rant at me. But anyway it all got sorted out. Fortunately the guy doing the job was very nice but don’t do that kind of thing. Just be polite all around and we will appreciate you.

#6 Train Your Staff to Do the Same

Don’t assume they will do the same. Don’t tell them on day one “do this, do that” write the process down, laminate it. You haven’t got a laminator?

Go to a print shop, go to your high street, look it up, google it, there will be someone who charges one pound or one dollar to do that locally.

If you put those points in big letters on a laminate thing, give them to your staff and say [10:00] “never forget these”. They will know how important it is and then you can check up that they’re doing that. You can ask for feedback from your clients say ”Did he do this?”

If I run through this list “Did my so-and-so person do this?” if not, go back to him re-train him and explain to him why it’s so important and if they did do those then you can say to a client “that’s fantastic. Do you think this is a service other people would appreciate?

Yes they would. Would you like to give me a name of someone else I can contact and we can use your name and said you may be interested. We will give them a special offer like we gave you”.

See how this all works? Brilliant hey? It’s not rocket science, dead easy, nothing to do with me being clever. You know how lazy I am. Oh yes I am. Anyway, whatever.

Go knock yourself out. Do a few more challenges. Improve your business. Make your life easier. Make more profit. Have a good weekend. I’ll see you next week.