Well the short answer is no. but I’ll explain a bit more in a sec. This kind of comes from personal experience.

In my previous business like Triangle Fire Protection, built up the south east, one of the largest independent fire protection companies that was sold to the billion pound kidder PLC, back in 2003.

We had many large customers, many little customers but I had a staff, I had a team, I didn’t actually get to visit and meet customers. So I didn’t have to go to networking things.

And also then with fire protection online, we are kind of like Amazon in the way we work. We are an ecommerce store.

We don’t have sales people and we don’t go out to visit customers. And so networking events have not, wouldn’t really be a benefit to me, because they are more local.

And we are nationwide, in fact we have customers all over the world.

So I have avoided networking events like the plague, for years. And I have always been quite pleased to be able to avoid them because it’s really not my thing. Some people love them, but not me.

However with Marketing for Owners, I am building a reputation in my local county. And people want to hear what I have to say apparently.

And also other people recommend me so I need to get out and about. And so I go to various networking events. 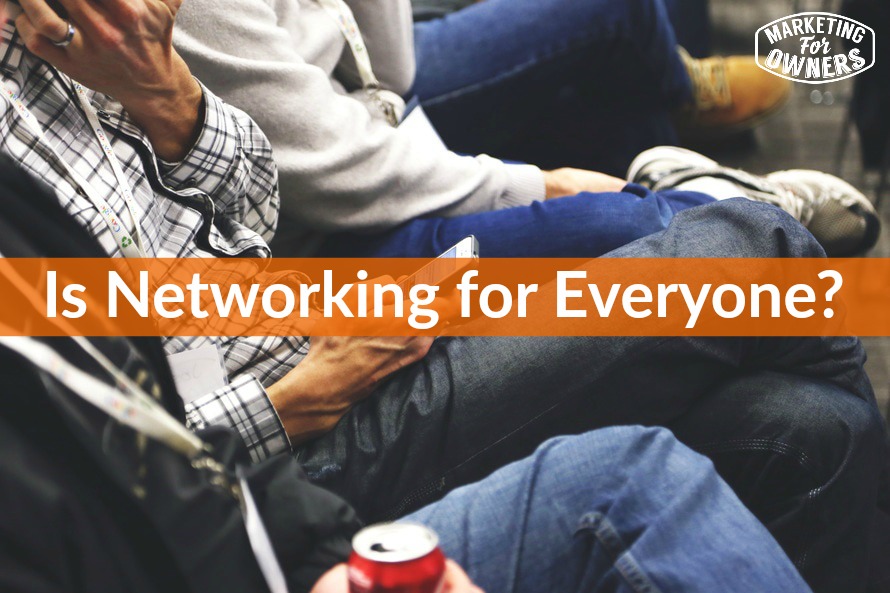 But I find that at many of these events, it’s the same people. The very same people. And by the way there are various networking events.

I am not in the BNI, or in Kent we have Bob Club, not sure what that is or is that nationwide. So I’m talking about more, and there are network breakfasts, oh there are all kind of things. I’m talking certain events that I go to. But there are always the same people.

But what I’m thinking to myself, and I was talking to a friend, who is an expert networker, about this, is — should people really be doing this? Is this for them?

And I just want to give you some feels. If you do want to do networking and or you are currently doing it, just think a little about what you’re doing.

So first of all, the type of events that I go to tend to be Business to Business because that’s where my customers are.

Now I don’t exhibit. That’s another thing. I personally feel I get more benefit by moving around, talking to the many people walking around, rather than standing on a stand and paying out money.

But even now, most of the people I’m meeting are the same people that I’ve met before. It’s the same crowd. And what I feel is that for some, when I’ve talked to them, they go to all the networking events, because it’s what they do. It’s there, some will describe it as their main source of marketing.

However it’s going to stagnate if you are at similar events where the same people are going all the time. Then you are going to eventually run out of steam.

Now if you think of one of these, one of the events I go to is quite feasible to be there for a few hours. Of course you might want to listen to a speaker.

Fine that’s great if you want to do that. But if you are there for 4 hours, what else could you have been doing in the 4 hours. Now for that type of networking would it have been just as simple to contact people via LinkedIn, to build a relationship.

Because when you meet people at one of these events, you are not selling, I hope you’re not. You shouldn’t be selling. You’re just trying to get the basics of, to get to know someone, to find out if they are a potential lead. They are not even a lead at this point. A potential lead.

So in which case, I don’t know if I was you, give them your card, unless they ask for it. But certainly take their card and then take control.

So that you may wish to contact them, at a later date and arrange to go meet them and talk some more. Get to know them, build a relationship and then if you can offer services, if it’s appropriate, and take it from there.

What Audience Are You Trying to Reach?

But first of all for networking, decide what your audience is. See there are people at these business to business events that are selling or pushing wrong kind of products.

They would be better off at other type of events. Also there are some that just go to network breakfasts. And quite often in a network breakfast that I go to, people are given 1 minute or 2 minutes on each table to explain who they are, what they do.

And again most people have not practiced. What they do, it’s all ‘I am, I do this, we this, we that.’ No explanation of benefits to you any users of giving interest.

And quite often I listen to them, listen to people around the table and find that half of them sound the same as the others.

You could just close your eyes and you can guess who said what and then it’s a business card exchanging thing. And of course when we get back, we can’t remember whose card is whose and we throw half of them away. Is that what you are after?

If you are a business supplier perhaps you think like this — one of the latest ones I went to, the person sitting next to me was a printer. And she was new. Now that’s fine.

Because she is going to build these up. But my advice to her is not to go to them forever because people think, ‘oh that, the printer I went to talk to’. But also she should niche down.

But if you are, if you want to be in something like BNI, lot of people go to a BNI type event. Again if you are B2B, it’s probably not going to work as well, because it’s going to be small and local and it’s going to be more effective if you deal with householders or consumers.

So for example, if you are a plumber, you can team up with an electrician and recommend each other’s services.

Make Sure it Benefits You

So my advice is, make sure this is of benefit to you. Figure out how much time you spend and figure out the return on investment.

So write down, how often you go to an event, how much time you spend, how many leads you get, directly from these events. And how many of those leads you can convert into clients and into money.

And then workout the lifetime, the average lifetime value of your customer over a year or two, depending on what you think is appropriate and then reverse engineer that, back into the amount of, the benefit you get in the return on your time.

And work out if it was worth it. And of course any other associated costs.

Vary the Events You Go To

But the other thing I’d say is vary, vary the ones you go to. Don’t get stuck in your comfort zone. And don’t ever think, ‘Oh, I’m always at these, if I didn’t turn up, people will wonder what’s wrong.’

No they wouldn’t. They think, ‘Gosh, they are out there doing some other marketing.’

So that’s the thing. Is networking may be for you. It may be not. But do not do it because it’s what you always do.

And don’t go to all of them because they are not all for you. Work out what’s appropriate. And that’s it. Of course I am not saying this as an expert networker. I’m hopeless. But just my observations as a marketer. Okay.

Now it’s Thursday. Time for  a Drive Time Podcast, for when you are commuting. This one’s good. It’s from Dave Ramsey’s Business.

And they take lessons from top authors, Simon Sinek and people like that in Gary Vaynerchuck. And they discuss them.

Its once a week. It’s about 40 to 50 minutes. It’s very very well done, and very very interesting. I strongly recommend the EntreLeadership Podcast.

Go listen. You’ll find it on iTunes, sure it’s on Stitcher and all those things. I recommend it. I’ll be back tomorrow with our Weekend Challenge.