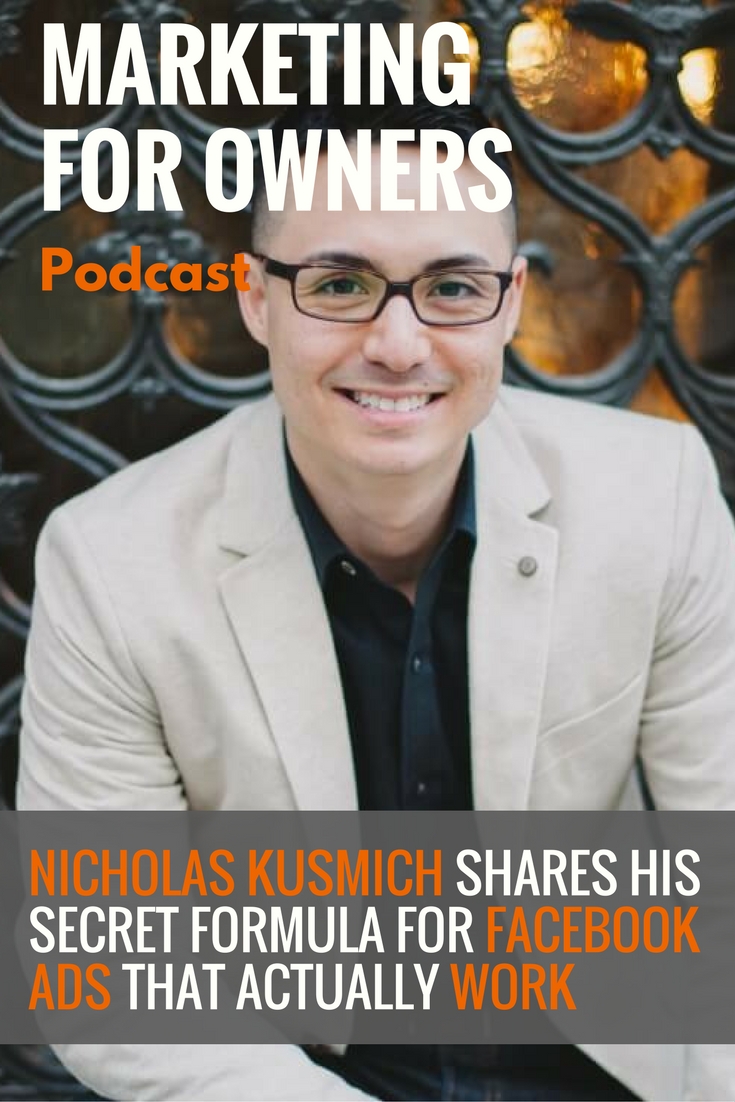 When it comes to advertising on Facebook, you want to go to no-one else but Nicholas Kusmich. He was one of the first to use the social media platform for targeted advertising, and he is probably one of the most successful as well.

In fact, you’ve probably seen and clicked on one of his ads.

A lot of his experience comes from his first proper job, selling expensive knives door-to-door. We’ve heard many times before how marketers honed their craft by treading the cold, hard streets every day when they were younger.

However, at the age of 17, Nicholas had no choice but to become the primary breadwinner for his family. But his determination meant he made his way through the ranks and learned a great deal about direct selling.

And it wasn’t long before he found himself online, introduced to the world of online marketing.

Following an online course, he created and sold an eBook. Quickly, that opened doors for him as people wanted to know how such a young guy had achieved the success he’d had with it.

His life really changed when Facebook opened an advertising platform. And now Nicholas runs a top agency and consulting business.

Nicholas was late to the Google AdWords game. And although he hadn’t done any paid advertising himself, seeing other people lose their Google Ad businesses overnight made him very cautious.

Instead, he wanted to find somewhere else for him to generate good quality traffic. And at the time, only Facebook and the dating website Plenty Of Fish made good sense.

They were both using their extensive collection of data to open an advertising platform. So, Nicholas tried both.

But around 7 years ago, when it was still in its beta stage, he made the decision to focus on Facebook. And after all this time, Facebook is still around and looking like it won’t be going anywhere anytime soon. It was a decision which has really paid off.

A few years ago, Facebook started to disable many thousands of ad accounts. And that was because direct response marketers, coming from other platforms, hadn’t appreciated the difference between Google and Facebook.

At its core, Facebook is not a commerce-driven platform or an advertising platform. It is a social platform in its truest sense.

When people log into it when they wake up, they don’t have their credit card in hand, looking for something to buy. Instead, they’re going on there to catch up on all the cool things their friends have done, and to see what’s going on in the world.

So with people using their direct marketing habits, they were either not getting a successful result, or were finding themselves banned.

Social behavior and buyer behavior differ greatly. And likewise, so must the platforms people use to achieve either.

Nicholas compares Facebook advertising to an iceberg. To be successful, only 10% of the effort and work is visible. The other 90% is below the surface, unseen by their audience, but is what keeps that visible part floating.

Setting up a Facebook ad isn’t difficult. But a lot more effort goes into a successful campaign.

What you’re saying is less important than the way you’re saying it. And when something is said socially, it carries much more weight. The different tactics you employ are useful, but that’s far from the whole picture.

And although it’s great to have that ideal customer in mind, it perhaps shouldn’t be your complete focus. You need to also consider who you are, and how you want people to perceive you.

Below the surface, there needs to also be an understanding of social behaviour and to know what your targets are thinking.

In a noisy marketplace, you need to make sure your message is standing out.

The Road After The Bridge

What Nicholas finds people advertising on Facebook don’t understand is that their ads need to be a lot more just trying to bridge the gap between the person and the thing they’re selling. It’s not an effective method.

You don’t use Facebook to promote the product, service or event. There is more that goes on after the bridge.

In fact, the Facebook ad only bridges the gap between the potential customer and the first step. Before you can expect to receive, you must give something. And an effective way of giving something is in the form of content, or some other type of lead generation. 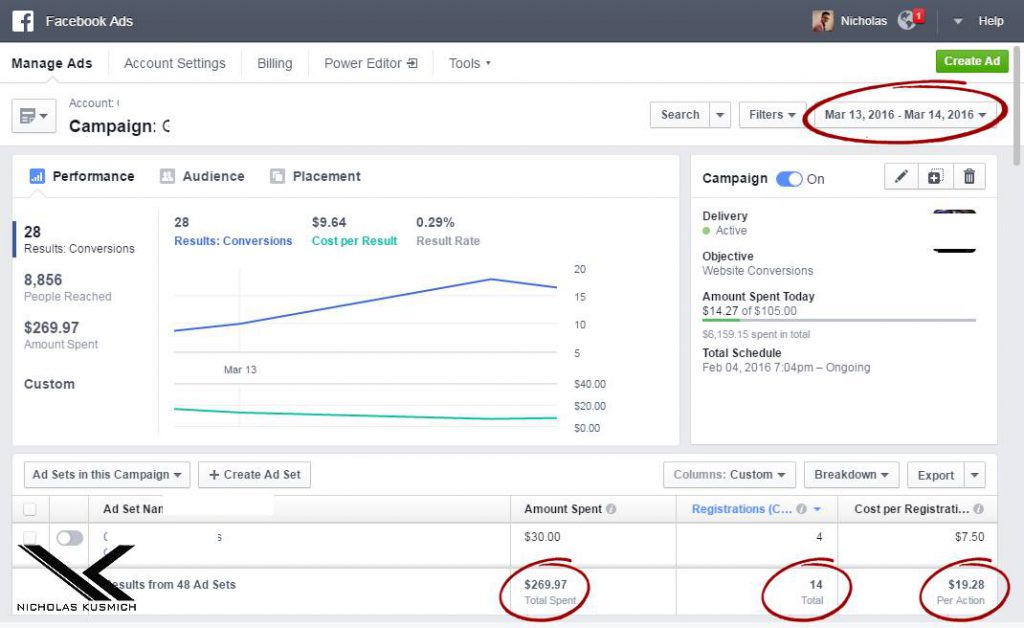 Every step must add value to the individual, and the marketplace as a whole. It’s building a relationship which is vital, even if they don’t make a purchase at the end.

Nicholas has a formula which he teaches to everyone he helps. And when people follow it, not only do they have an effective way of marketing their business on Facebook, but also a system which can be put in place and will work.

It consists of four stages:

People use their advertisements on Facebook to simply make promises, on what you can help them to achieve. However, in a noisy marketplace, where everyone is offering the same thing, it’s impossible to stand out.

When you’re trying to get noticed, you need to tell a story or have a narrative people can connect with.

The internet means customers can be choosy, and often they buy from someone they resonate with through their experiences. People really do get behind a good story.

And it also builds the like and trust levels people have with you.

When money is no object, everyone would choose the specialist of their industry, sector or job. For example, when having heart surgery, you’d want to have a heart specialist conducting the operation.

The higher up that ladder of perceived standing you are, the less you have to market, the more you can charge, and then the fewer sales you have to achieve. That’s because people will actively seek you out, and will happily pay a premium for what they think is a better service or product.

So if you can establish a position in your marketplace, you can then work to confirm and maintain that standing.

In a choice between being the moth or the flame, any business would choose the latter. Having people chasing after, and coming to you, is the sort of thing every business would dream of.

So this is about working out what you can bring to your industry in order to be of value. Great pieces of content are the types of ways in which you can actually prove your worth and share the library of information you hold in the industry.

But it’s not only worth discovering what adds value to your clients, but also what would attract the type of clients you’re after.
And likewise, you need to be doing what they are looking for, and not just doing things the way you like to do.

At the end of it all, the best marketers never market. And that’s because they have systems in place which do it for them.

Rather than hoping and praying that their latest tactic will work, they have systems which they know work, established on proven platforms. And when that’s all working, the machine is marketing for them.

Do what works. And rather than changing it, find a way of improving it.

Adverts aren’t necessary about the process you go through, but the end result and whether or not it actually works to achieve what you wanted.

Understand what works, and what fits your industry and the potential customers.

More and more people are realizing that they need to utilize Facebook for their business advertising.

However, Nicholas see’s many entrepreneurs go into it half-hearted and lazily. So when it often fails, because they’ve not understood how to effectively market themselves, they give up and move onto the next thing.

Something that makes Facebook appealing is that it allows people to acquire new business with little investment. However, with that sort of approach, it will never work.

There will always be people there, targeting the same people as you, spending a lot more money to catch their attention. And it is those people who are left standing and win the battle.

But don’t become disheartened by that fact.

Instead, when you start thinking about your Facebook ads, consider the long-term benefits of getting those customers, and the return they’ll generate for you in the future. With that in mind, you may decide that it’s worth spending a little more, rather than just paying the cheapest rate.

Nicholas Kusmich only has a small amount of clients and a waiting list for new clients. But four times a year, he drops the veil on his Facebook marketing secrets.

The Art Of Lead Generation Implementation Intensive will get some lucky people into a room, to actually do something. Rather than having people leaving with a to-do list of things they won’t do, Nicholas will help you to leave with a list of things you’ve achieved.

30% of what he does is teach, with the rest actually doing. And he will help you to create a complete lead generation system, based on his strategy, which is ready to go live as soon as you leave.

And if you’re still not sure if you should apply, then have a look at the list of people he’s helped and the outstanding testimonials they’ve left him.