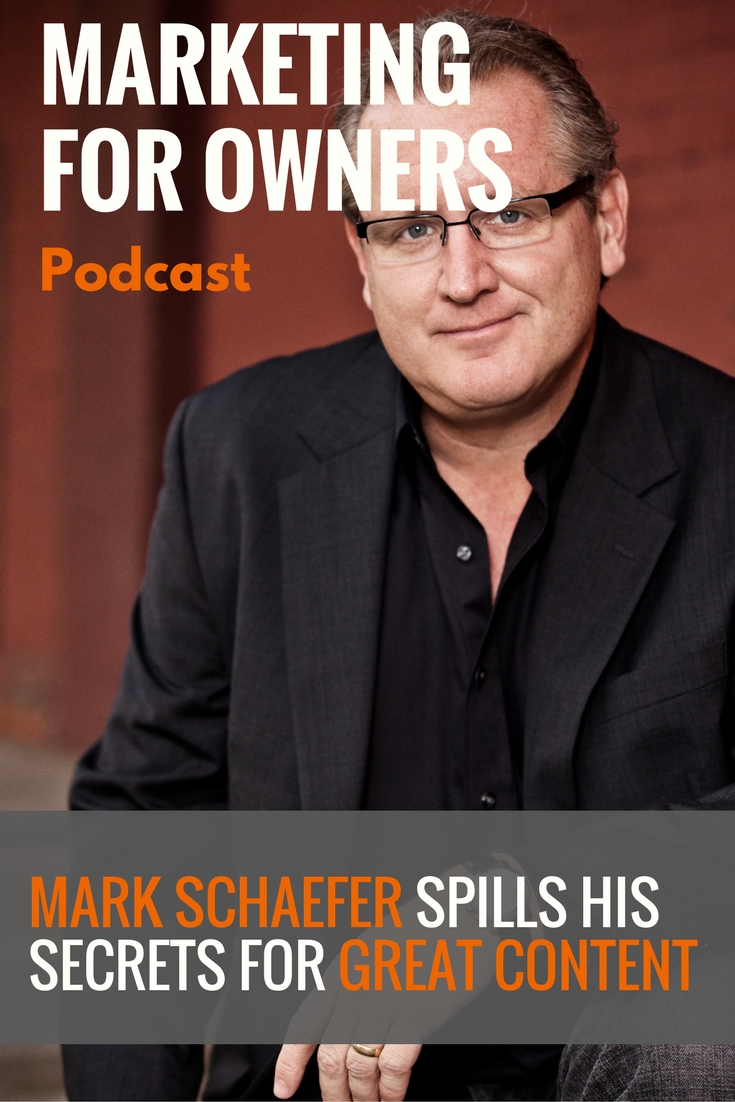 It seems like Mark Schaefer has done just about everything over the past 30 years. But he’s currently well-known and respected for his numerous books and great blog posts, as well as his work as a podcaster too.

Mark has always loved to write and started out working for his local newspaper when he was still in high school.

It’s there he fell in love with journalism, and by his final year at college, he was news editor for the daily school newspaper.

But like many others, he discovered there wasn’t much money in journalism so at college he majored in chemistry.

However, during a journalism course, he discovered that there were a lot of other career options available for people who wanted to be writers. And that’s when he also fell in love with marketing too.

He tells us about his journey, and how he finds himself being reinvented every five years. And he also uses his years of experience to help us understand how we need to market our businesses, no matter their size, and how to have content with real value.

A Journalism And MBA Student

Mark see’s journalists as being more like lawyers than creative writers. They have a formula to which they must conform, facts they need to stick to, and a set way of presenting the information. 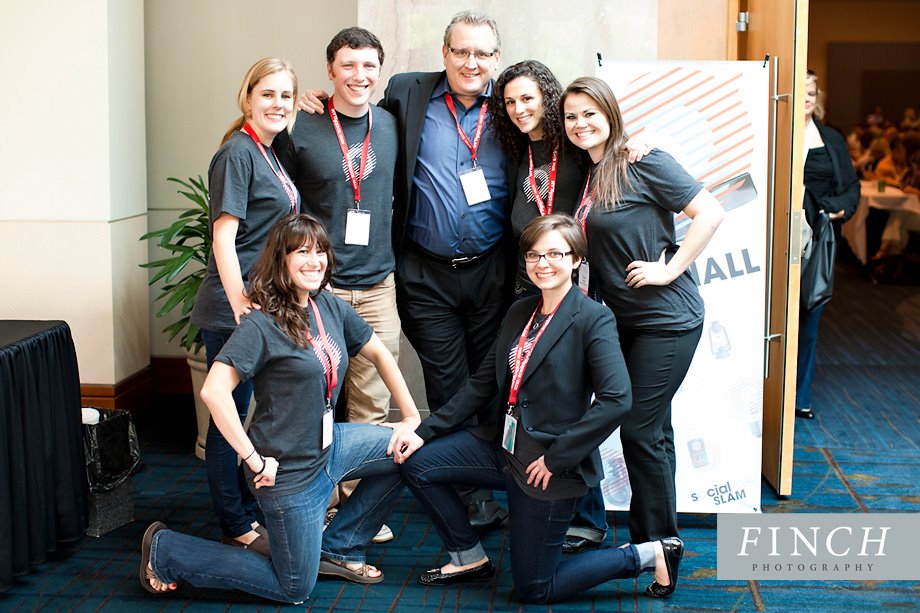 But despite that, he still has a great deal of passion for the free press as it’s filled with people seeking the truth and fighting for a better world.

However, his degree in journalism has prepared him well for life. It gave him a broad education, and many of the skills he learned are ones he still uses in his blogging today.

But it also meant he had to learn to write quickly, effectively, and under pressure, even when there are lots of distractions. To prepare him for this, his teachers shouted at him as he wrote.

Then Mark ended up studying for his MBA under the great Peter Drucker. As you can imagine, it wasn’t easy to get into.

It took many attempts, but after showing his true tenacity to the dean, he became the youngest person to get accepted, at the age of 27.
He spent three years training alongside business Vice Presidents.

On Peter Drucker’s books, Mark says his favourite is Innovation and Entrepreneurship, and that his books are still relevant in today’s marketing landscape.

An unexpected fact about Mark is that he has seven packaging patents to his name.

This is because, in one of his marketing jobs, he was responsible for R&D for new products. And that’s because he appreciated, and still does, that marketing is about the front lines of business, where customer and business meet.

So it’s a lot more than just Facebook and content. Marketing is also about transportation, pricing and the creation of services, products, and value.

Mark would go out to meet with customers to figure out what they wanted. And he then had a team who would work on the ideas he came up with as a result and make them work.

Change With The Times

He has always described himself as a strategic thinker. Although it may have taken a little time for him to figure that out, it means his superpower is to look at trends and know where they were going to lead.

As I’m sure you’ll agree, that’s a good skill to have in marketing as that means he can stay one step ahead.

And his job used to consist mostly of writing reports and being obsessed with analytics and measurements. Probably something he’s good at thanks to having a degree-equivalence in statistics.

But that meant he didn’t write creativity much. In 2008, he not only started teaching but also his own consultancy business.

This meant he had to immerse himself in social media, as after all, you can’t teach something you don’t do yourself.

With his blog, it quickly took off with a large readership. At the time, there weren’t many bloggers who were also successful business people, and he found his experiences made him the voice of reason.

Even now, Mark doesn’t take his readership for granted and feels the need to still earn people’s trust. And that’s why people go looking for his latest blog update because he ensures every update is interesting and worth the reader’s time.

But it was this change he made that best-positioned him to write his first book The Tao of Twitter. Almost every day he still receives messages every day from people thanking him for writing it.

It’s because he opens the world up for other’s to explore as he demystifies the confusion which was, and still is for some, surrounding Twitter marketing.

One of the books he is most proud of was the first of its kind. And because he knows many people don’t finish books, he made sure to put the most useful information in the book, at the start. That way, he ensures everyone benefits from the knowledge.

In The Content Code, his aim was to help people who were becoming frustrated with social media and marketing. 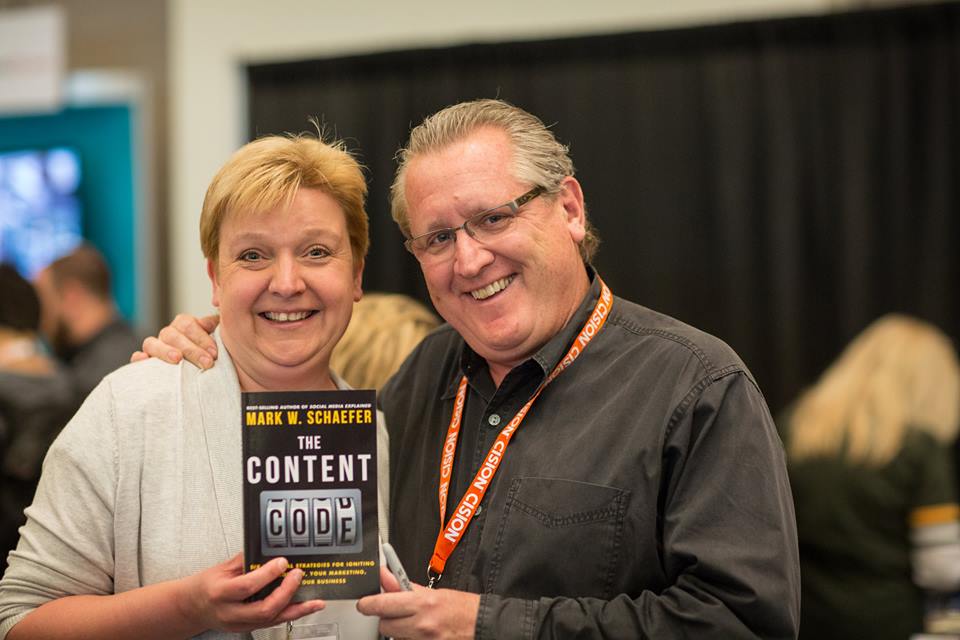 They were following all the advice they were given online, but it wasn’t working out. And that’s due to the fact that the world is now crowded with information, and with content no longer being a novelty.

So that makes it hard to find the audience. This required a change in the way people market, and for marketers to adapt. Writing a blog post isn’t your marketing strategy.

Having great content is great. But great content which no-one is reading has zero value. It needs to be seen and shared, and needs igniting to get it moving.

Not only do you need content and audience, but transmission too.

Remember Your Human Side

Mark has noticed a big difference in the way businesses treat people online and offline. And it forms one of the biggest errors which are made in online marketing.

In the real world, you wouldn’t greet people entering the store with a pop-up box, asking for their email address before they’re allowed in. You let them in first to get a feel for your value before you even think about approaching them.

Yet, many marketing tactics involve trickery of some kind. It may be you’re attempting to trick Google or the people who you’re wanting to click the link.

Technology should be used to knock down barriers, not build new ones.

And it is the businesses online who are the most human, who end up winning. Treat customers online the same way you would if they entered your store, as after all, they’re the same people.

A problem which is currently occurring is that people create things without thinking about their impact or the value they provide.

It’s common for people to market without even knowing what they’re strategy is.

And Mark has a question which he asks his clients to discover whether or not they are clear on what their marketing is, or should be.

Simply finish this sentence about your business:

To know the answer, you must know how your business is different, and what makes you stand out amongst your competitors.

He finds that it’s common for people to not be able to finish the sentence. And it’s often the case that when he asks a number of people from the same business, that they all comes up with a different answer.

And when that’s the case, it means you’re not ready to have a marketing strategy. Because having one depends on you knowing what you want to say.

When you want to know the answer, it’s a good idea to ask your customers. Find out why they choose to purchase from you over other businesses and brands.

You’ll likely find that they all have a similar answer. And that is the unique thing which sets you apart.

So after you’ve finished, just take five minutes to sit down with a pen and paper and finish that sentence. Hopefully, you’ll have an answer. But if you don’t, make it your priority to discover what it is by surveying your customers.

Mark has so much to share, and so many different ways which he does it. But to discover everything he has to offer, you’re best visiting his website at www.businessesgrow.com.

From there, you can find out more information about all the books he has written. You should also check out his blog, podcast, and selection of free Slideshare presentations which are helpful for every business of any size.