Today’s question is actually from a listener. Or in fact, no, to be more precise, a listener was asked this question. And she sent it in, asking me how I would answer.

Because she, one of her clients, or rather in a, not a client, in a mastermind she’s in, somebody said why is it so hard to start to make a business successful. It seems everything I do doesn’t work.

Here is my answer. So first of all, I gave a little sigh, because it deserved a little sigh. Because you have to feel some sympathy for somebody who is trying to get on in life, and isn’t getting there. 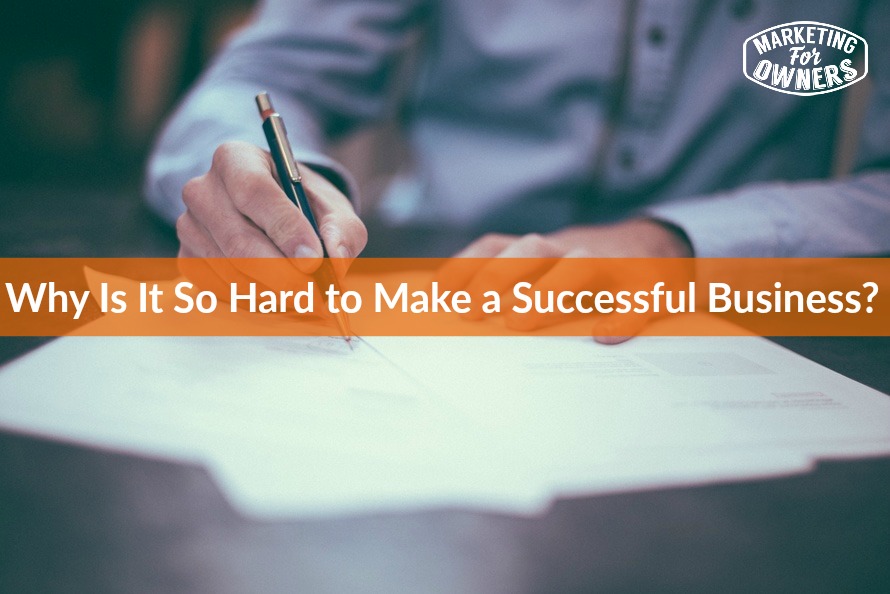 There are lot of people in this situation. Not everybody wants to be an entrepreneur. Some people just need to earn some money.

And whether that’s in a full-fledged business or whether that’s a bit on the side or something else, then it doesn’t matter. It all takes the same approach.

Now I hear this a lot. And I’m exactly the same with this.

You know, trying to do it on a cheap or bootstrap it trying to build something with zero investment. And the third one is not giving it enough time before you get distracted by the next new shiny idea.

Lack of Planning and Strategy

Now that can be in any method that you like. This can be via writing it down, drawing it out on a whiteboard, writing it up on a flipchart, putting it into a mind map, filling in a business plan, anything.

Whatever you do. But it has to come out of your head. You cannot just think about it while you’re lying in bed before you go to sleep. And then think, yeah, I’ll do that. It has to come out in paper. Or in some written form.

Now once you do that, it will make you think more deeply about it and you can then start to break it down into its constituent parts. And to consider all the bad things and the good things, now in any venture, anything you do, there must be the why.

So first of all, when you start planning, there has to be a reason why you’re doing it. And an end goal. What will happen? How will this improve your life, or your lot when it’s done?

So you need those two things before you fill the bit in, in the middle. The how to do it, and what it is. So you need to know, why you’re doing it, and it’s a bigger reason, the big WHY.

And then, how it will effect things when it’s done? That gives you the reason for completing. Okay. That’s quite essential. Then you can set goals. And you can set projects, and you can decide whose needed, and etc. etc…

Now second one I mentioned was a lack of, lack of funding. Or lack of, well a lack of money and time. So remember, time is money.

Anything that appears to be free is not because it took your time. There is no such thing as free. In any form of business, to expand sales, it’s going to cost money.

Now that money may be time. It may not just be cash money. Okay. So remember that.

But it will require that investment. So you either have to put some money aside, or put some time aside.

And if you cannot commit those consistently, or in the money side, obviously it’s probably a single investment.

And when I say an investment it could be a couple of hundred pounds or couple of hundred dollars. I do not, there is a culture in entrepreneurial world, especially in the USA, of running up huge credit card bills to get a business going. I don’t recommend that.

In fact, I have to admit, I am sorry to say, although this is a common story, seems to be what everyone likes to hear. But I am not impressed if anyone’s going to rack up credit card bills.

The interest rates are ridiculous. And that can put you right in the hole if things don’t work out. So that’s not sensible.

But quite often these things don’t need much but they will need something for eventualities. And if you’ve planned, you’ll know what those are going to be.

So then you’ll know what you need. Or you’ll know the amount of time you can commit. You cannot do these things half cocked.

Things Do Not Work Overnight

Then the next one is pretty obvious. Once you attack something, once you go at it, things do not work overnight. Yeah, we can hear about google and Facebook, and we say, oh only a few years ago they were starting in their dorm rooms in Stanford, or university, or wherever they were.

Facebook is not just Mark Zuckerberg. It is a massive worldwide infrastructure of data centers, of programmers continuously keeping that thing working. It always works. It’s always there.

Because of its potential, other people came along and invested. But they went and asked people to do that. Wasn’t automatic. Hired the right people, he had a plan, etc. etc.

Nothing comes easy. You have to stick at it. Now there, for every Facebook there are a thousand would be Facebooks that you’ve never heard of. And why you have never heard of?

A, they didn’t plan. B, they ran out of money. Or C, it didn’t work. Or D, they didn’t give it long enough. They got distracted. They diversified, they didn’t stick with the plan. If your plan’s good, go for it.

Another help is to get a mentor. Get someone to look over it. Ask someone. There are plenty of people who do this for free, who can save you a ton of time. Even myself.

It is Monday and that means it is time for the Book for the Week. This also goes hand in hand with what I am talking about. It’s called ‘6 Months to 6 Figures’. It’s by Peter Voogd.

It’s a great book. I like Peter’s books. And I just like the way he presents. He is a very successful, He’s a go getter, but he explains stuff in a way that makes sense to the rest of us. Excellent read.

And I’ve recommended books of his before. So a guy to follow. See what he does. It will be a great inspiration to you. I’ll be back with some more tips tomorrow.