Does that make sense? You buy stuff. You are people’s customer. So you need to figure out how it works for you and then apply the same to your customers. So it’s all mental trickery. It’s all head games stuff.

And one of the things is if you can help them, convince themselves to buy it, you give them the justification where they can make the decision today.

Then it saves your job. Because quite often people want to buy it but there’s a couple of things, it might be money, it might be, oh I don’t need it yet. You can get to it. 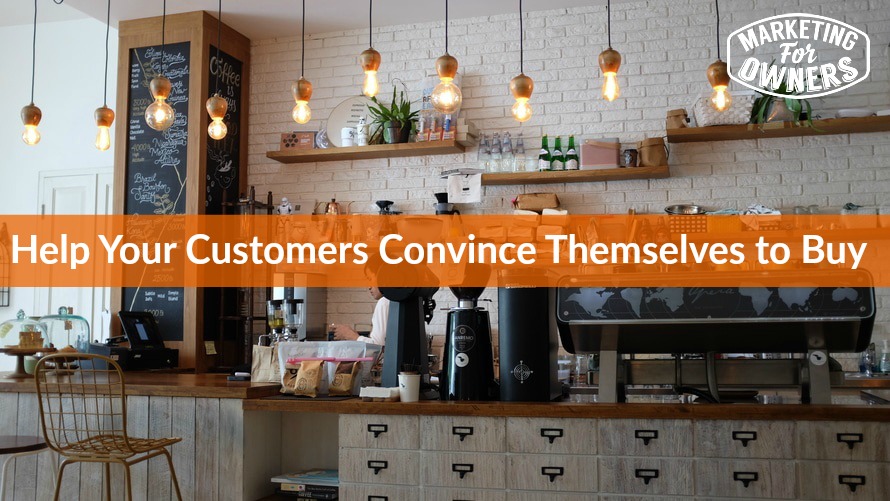 Now ladies I am going to apologize because I cannot talk about shoes or clothes because I don’t have the expertise, so I’m going to talk about men’s stuff. About blokes.

Now blokes as we know love gadgets and cars. So there you go. Can’t think of anything that helps with sport. But say you want a new TV.

Last night you sat at home, you were watching Netflix on your TV. It was perfect. It was fine, it’s lovely. It’s a TV. It’s a big flat screen TV. It works. You don’t need one.

However the other day you saw an advert for the new Samsung 60 inch, 4K, whatever. And you’re thinking, ah this is the next generation. This is what they use at the movies. 4K thing. It’s just great. I need one of those. Or I’d like one of those.

Now then, you’re in a Best Buy or a Currys. That’s the UK version, similar thing. So, and you’re looking around like you do and you stand there and you look at it, you think, ‘Gosh not as much as I thought.’

The guy comes over and, because in reality you obviously don’t need it. You’ve got one. It’s fine. If you didn’t know the thing existed, if you weren’t there, you wouldn’t even be thinking about it.

In fact you’re a lazy thing, you’d probably be at home, sitting on a sofa, drinking a cup of coffee, maybe a beer, watching something right now, instead of working. Like you should be.

But you wanted it saying buy me, buy me. It’s pulling you in. so you start to think of justifications. You look at it and you think, it says there that it’s more energy efficient.

But little things like that, little ideas. And the salesman explains something about it and you think, oh that’s handy.

It’s for instance, it’s lightweight. It’s lighter than your current TV and you think, hmm. And so you think um okay, also if it fell over, say on a kid, wouldn’t harm them.

Of course not an issue with your current one but you start to think like that. And that’s the way it goes.

And again, you’re out one day, you’re in the mall, kids are shopping, you’re hanging around, you’re a bit bored.

You say, look out, ‘I’ll just, do your own thing, I’ll be back in an hour.’ You walk out. There’s a BMW dealer next door, you walk in, you look at the cars, you just look around. You’ve got a car. And you start to think, ‘hmm gosh that doesn’t cost as much as I thought. Oh look at that. I like that color.’

And you look, you pick up a brochure, you look at the colors and you start to convince yourself that you want it.

But in your mind, you’re already telling yourself why you should have it. It’s not just because you want it, because that would be naughty.

And when getting approval. It’s not approval from say your spouse or your family or the other people that might want to claim on that money.

But as I am just about to fly off to Vancouver and I was outside the store where I get my upgrade, I thought, I’ll just pop in, and see in fact I left the store, I said, ‘Ah I’ll come back in November.’ And then I went back in. and I got it.

Now I have paid an extra month’s something I paid, it’s not much. I paid like 25 pounds extra because I upgraded a month early. I could have waited.

The iPhone 7 is exactly the same as the iPhone 6 except with a funny headphone jack thing, hanging out at the end, which is fine, doesn’t make any difference to me. By the way, looks nice as well. But looks exactly the same.

But I could have waited. I’m going off to Canada. My phone’s fine. If it didn’t exist, I wouldn’t have needed the upgrade.

When I get back, I could get it, I wouldn’t have had to pay the extra. But I thought to myself, well if I do it now, it says, I actually said, in my mind, I was thinking about it afterwards, I said, well say it’s me coming back up here.

I mean I’m in that area all the time. It also started raining and I actually said to the guy, ‘Oh it’s lucky I’m doing this instead of heading back to the car in rain.’ Ah! It’s rained before. And little things like that.

So when they are buying, get in their heads. Think of it the other way around. Turn it around and think why would they want to buy? And then throw out these, throw these reasons at them.

Throw the justification reasons at them so that they can make the decision to buy it now. Rather than later. Because if you give them the chance to buy it later, they see an alternative or they forget, or they just don’t do it. Or they just think, ‘Naaaah.’

If, but when they are in the mood, ‘Yeah.’ So I don’t mean in a scammy way, you know obviously they need to need the product.

But that’s why they are there right. So work on it. Think like they are going to be thinking. And don’t give me the, ‘Oh I don’t know that’ yes you do. You’ve got loads of customers.

Think what it means to them. Think of everything that’s a benefit to them, and tell them over and over by email, by twitter, by social, on the phone, by, you know when you are speaking to them in your copy. Everything. To help them justify it to themselves. They convince themselves, then they buy it. 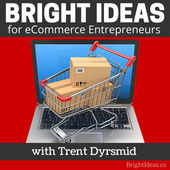 Today is Thursday and that means it is time for a Drive Time Podcast today. It is The Bright Ideas podcast by Trent Dyrsmid.

Go do it. You’ll love it. Honestly it’s good. It’s varied. Sometimes it’s parodic. But he’s up to 200 and something shows. He’s been around a while. I like it. I will be back tomorrow with another great interview.