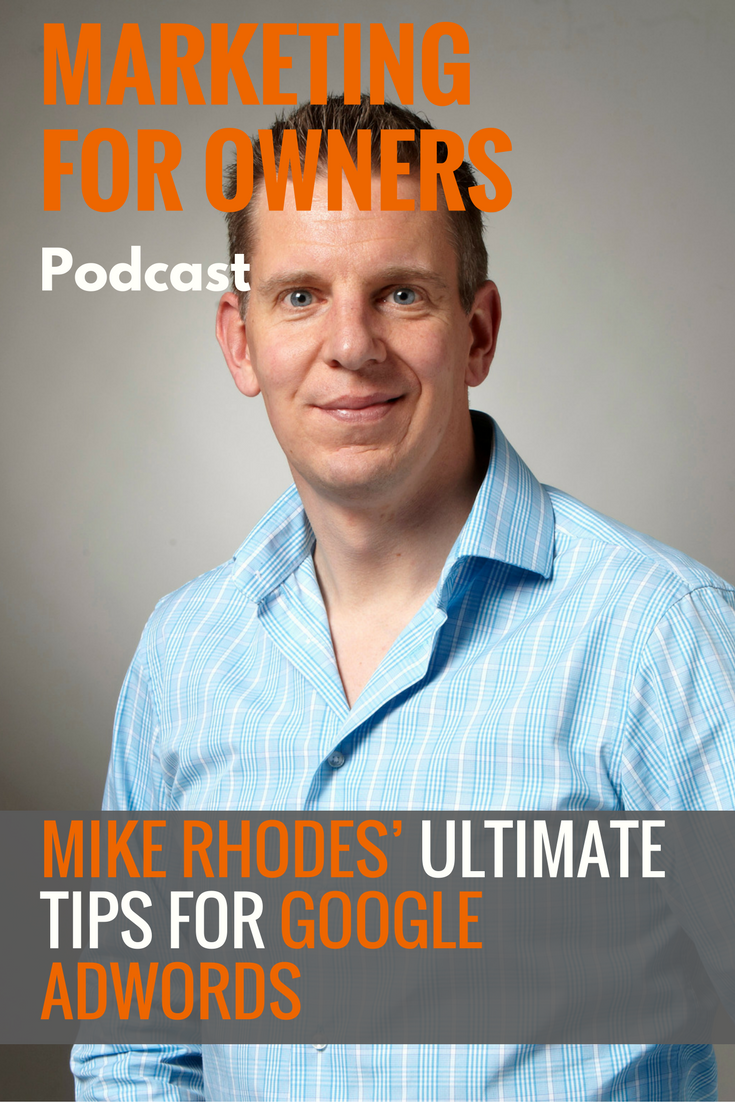 Having dropped out of university studying engineering after the first semester, Mike Rhodes started working for a few businesses. This is where he discovered his enjoyment for the business of businesses.

So he gave university another go and studied Business with Computing at the University of Kent. Having a skills degree enabled him to successfully get an Australian visa and soon he ended up in Melbourne.

In 1999, a friend handed him two books which have had a massive influence on how his life since has played out. Cashflow Quadrant by Robert Kiyosaki and The E-Myth by Michael Gerber both changed his life.

Now he is the expert everyone wants to turn to when looking for someone to manage their Google AdWords. In fact, Gerber himself is now one of Mike’s clients as he’s helping launch his latest book.

So if you’re going to take advice from anyone on how to run successful AdWords campaigns, you can’t do much better than choosing Mike Rhodes.

He has some great advice, and he’ll help you to audit your accounts to make them efficient and effective.

After being influenced by those two books, Mike set up a business in New Zealand whilst traveling. Within 18 months, he’d built it up to a success and sold it.

With the money in his pocket, he moved to Sydney and ended up attending a Tony Robins event, after which he ended up penning a letter to Michael Gerber. Six weeks later, he received a call, saying that Michael wanted a chat.

A few days later, Mike was on a plane to California, where he ended up training with the man himself. That is an MBA in Business you can take to the bank. In 2004, he then saw a Perry Marshall presentation back in Australia.

That was where he discovered that Google AdWords were the future of business. It was exactly what every business needed to do – showing adverts to the people at the exact moment they’re looking for the things you sell.

He also liked that Google AdWords gave you instant results, unlike SEO, so he set up his own agency. Plus, he liked being on the right side of Google, as after all, AdWords now makes up around 95% of their overall income. Since then, not only has Michael had Gerber as a client, but also Tony Robins.

Plus, he’s also co-authored a book with Perry Marshall and Bryan Todd called the Ultimate Guide to Google AdWords. You can’t ask for better career success than working with the very people who inspired you when you were beginning.

Google is massive, and they’re a major player when it comes to directing traffic towards your website. It is the search engine of choice and the likes of Bing and Yahoo! can’t compete.

In the US, 65% of searches are carried out on Google. In Australia and the UK, that figure is over 90%. It takes a lot of hard work to spend money on Bing as a result of it lacking the popularity.

And that extra effort which is more wisely spent on Google. Before looking elsewhere for a source of traffic, you should focus on getting just one working for you first. For most, Google is the logical place to start, but for a few, Facebook is also a good place to start. 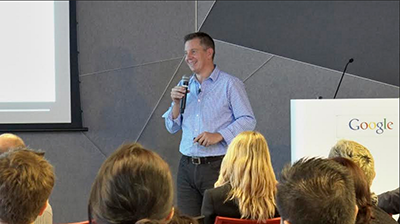 And either way, Google and Facebook are the two main places you need to win before even looking elsewhere. However, it is important to point out that Facebook is a completely different game to Google. So don’t think that the campaigns and tactics are interchangeable.

Another key area for making the most of your website traffic is to work on the website itself. You need it to be good at converting visitors, otherwise, all that effort is wasted.

The people who visit your website need to either become customers right away or, more effectively, subscribe to you. By filling out the forms on your website, they can then receive your marketing efforts. For many, simply improving the website is the easiest way for increasing profits.

What To Do When Google Recommends

Should you listen to the recommendations which Google will suggest to you, in order to improve your efforts? It can be difficult to know whether you should trust them completely.

But Mike has some tips. Under the ‘Opportunities’ tab in AdWords, you can often find some minor suggestions, such as new keywords or a few small tweaks here and there.

These are machine generated and always worth a look. You should investigate these recommendations, but don’t just blindly apply them either. It’s a tool which needs using correctly in order to work.

But these are not going to make massive improvements. If those are what you’re looking for, then it’s worth contacting an agency. But when you receive an email or phone call from Google, you are best to avoid these recommendations.

What generally happens is that Google thinks that you should be spending more money. Their advice is often to try ranking for a broad range of keywords. In the real world, small businesses just don’t have the big bucks to spend lots of money in order to acquire some data. It’s far more effective to use a smart and considered approach.

The future is here. The roll out Expanded Text Ads marks one of the biggest changes which Google has made. This will see the size of adverts increasing by 50%, and as a result, organic search results will be pushed even further down the page.

You will now have to think a lot more about the ads which you are showing. You’ll have 140 characters to use and to make every single one work, it will require all your marketing skill.

By the end of January 2017, you’ll no longer be able to create the regular adverts, but you will be able to continue to run existing campaigns. However, it’s something you can’t afford to ignore, and this is instead an opportunity to utilize.

Many people only log into their accounts on very rare occasions. And these people are unlikely to make the change very quickly.

Therefore, you can make sure yours stands out against the competition. Even if you’re not at the top of the list, you’ll naturally get more clicks if you’re using the Expanded Text Ads when those around you are not. This then sends a good message to Google.

You may then find you’re bumped up the list and Google may start charging you less per click, purely because you’re good for Google. It’s vital that you keep an eye on your conversion rate, however. The downside of this is that you may not get the same quality of traffic.

So although your traffic is increasing, conversion rate can decrease and you’re paying more for it. This is where testing is vital. Click through rate is purely a vanity metric, and it is the profits which ultimately matter.

In order to control it then, negative keywords are the best way to improve your account. It’s an easy thing to do which is often overlooked.

You can add these by going into each campaign and looking at the search query reports. This allows you to identify the searches where your ads don’t belong because they’re not relevant. That way, you can make sure only the right people are seeing them.

Mike suggests that AdWords Editor is a must. The free tool is especially important if you’re spending more than a few thousand dollars, or a few hours managing your account, every month.

As changes are not implemented until you apply them, you’re free to play around and learn how to use it without affecting your account.

Plus their help center is full of resources to assist you. But there are two other tools which Mike recommends to his students.

Firstly is Optmyzer, which was created by Fred Vallaeys who used to be on the AdWords team for 10 years. Therefore, he knows about it better than any other. It has a range of different purposes, from helping you set up shopping campaigns to the ongoing day-to-day management of your account.

The other tool is PPC Samurai which uses a nice graphical interface as a way of applying rules to your account. So this is a good place to start when you have no idea about coding scripts.

There are certain things which you need to get into the routine of checking. How often you do this can vary depending on your size, but they are important as they help you stay ahead of the curve. It’s good to look for big drops in impressions and conversions as a daily check.

It’s possible that something may have changed, or something has gone wrong without anyone realizing. One of your ads may have been disapproved, or the URL incorrect.

So you don’t miss these, and you can use Account Anomaly Detector Script to make this a little easier. It is also a good idea to regularly check your ads, bids, and keywords. Looking at those ads which are the winners and losers is perhaps a fortnightly check.

Bids too can be changed fairly regular and should be altered according to its profitability. Just remember, this can take a few weeks before you’re able to determine its success.

Also make sure changes are not made according to assumptions, and only on real data. It’s probable that you’ll see less spending at night, but at 3am in the morning, you may actually have a good conversion rate. With keywords, it’s also ideal to add negative and positive keywords in the mix. Just keep testing.

The Future For AdWords

Google is trying to do as much of the heavy lifting as possible for all its users. With AdWords, they like to simplify the many different parts, whilst at the same time allowing other users to control more and more on their accounts. 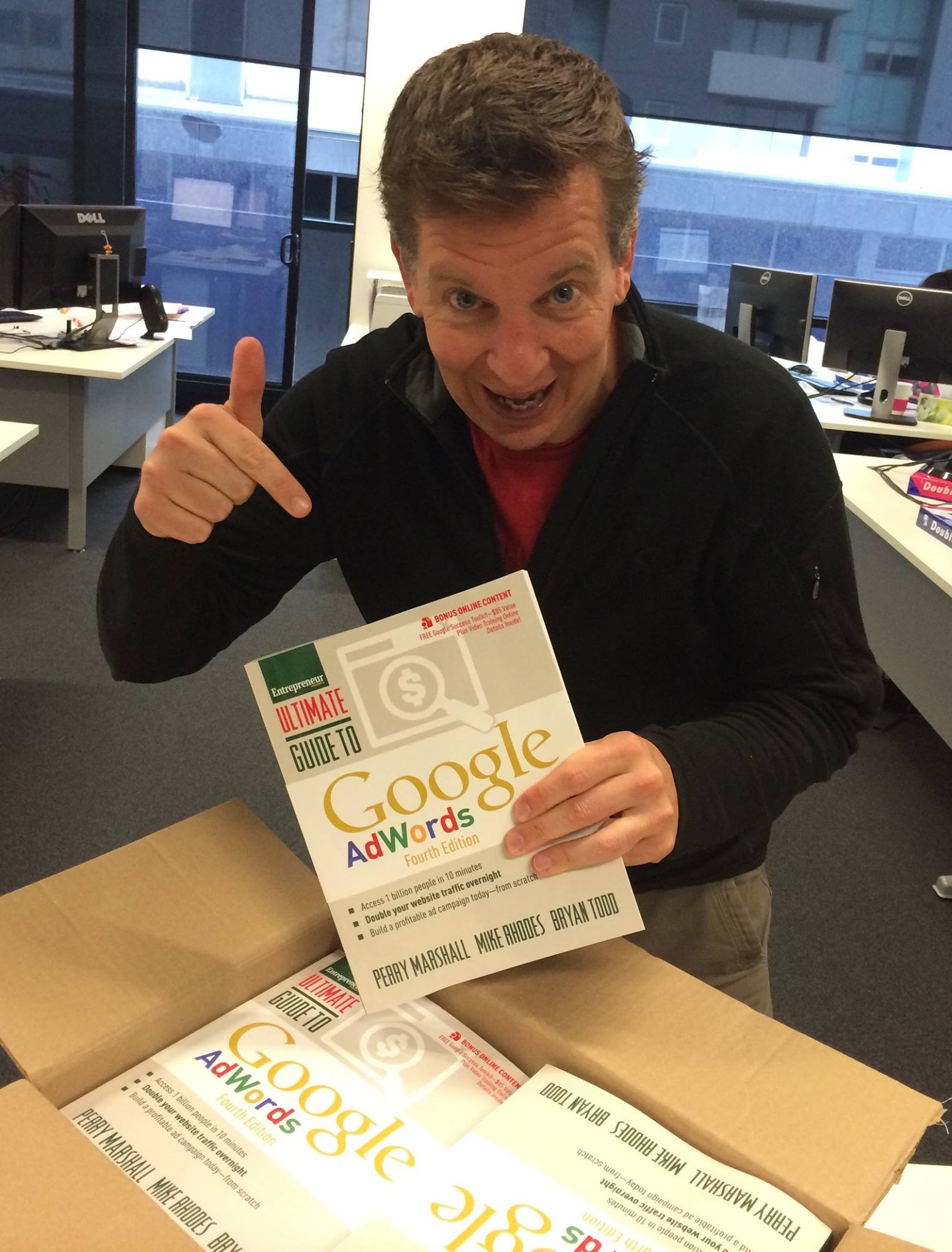 And likewise, Google is moving towards audience targeting based a lot more on their behavior, rather than just keywords. They can see everything a user does in their Google account, whether that’s through Chrome, on their android phones, or in Gmail.

That way, Google knows when you’re currently in the market to buy something. They have also added demographics for search ads.

That allows you to bid differently according to age and gender. So you could have men and women see different ranges of products. Or if your product is primarily for those over 65, you can ensure 18-year-olds don’t see the ads.

And these levels of personalization are only going to increase, especially the more Google dominates every aspect of our daily lives.

Almost any Google AdWords account can be improved by completing an audit, which can help you to save money and get better results. In fact, Mike has put together an audit which will help you do many of the checks he has discussed.

As well as the Ultimate Guide to Google AdWords which Mike co-authored, you can also visit his AdWords training website PPC Savvy.

There is now nearly 100 hours of content available, plus a community of people who help each other. So if you ever have an issue, you can share it and a clever marketer is likely to respond with a solution.

Mike Rhodes also suggests you check out the Beyond The E-Myth website, where you can read some preview chapters before the latest Michael Gerber book is released December 7th, 2016.