There’s already a good course, I don’t know how much it costs. Michael Hyatt brings that one out every year. Fantastic guy by the way. He’s absolutely inspirational.

But you’ll get everyone in your inbox telling you to how to set goals, how to do this. And yeah, I am going to do it as well.

But when I set them, or when we set them as a team, we do realistic stuff. We don’t go over the top, we don’t have all these ridiculous things. 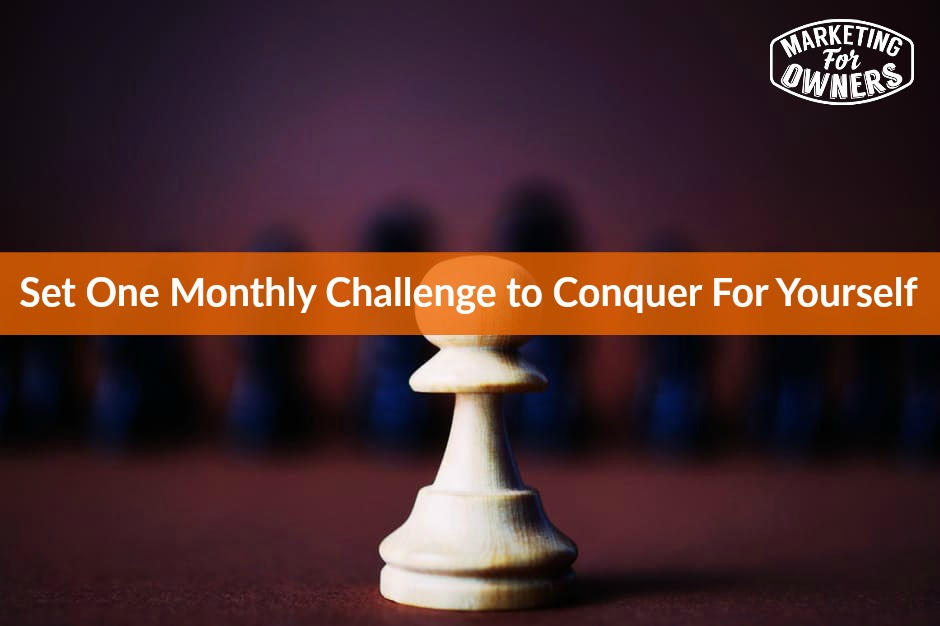 But and I’ll come back to that and I’ll explain some more of that in other episodes, because I like to keep it real. Stuff that we can use, stuff that is actually significant. Goals you can achieve, goals that you will, will move your business forward, things like that.

But what we do forget is personal. So how about something for you because this, your goals of your business, for your team for whoever, but quite often we forget to set things for ourselves.

Just take us away and give us something else to think about. Now it could be something, I am not going to say something so simple hours (2:29) because these are not simple.

But I remember Mark Zuckerberg, Facebook. I think he set some personal goals every year or something.

One year he wanted to learn, was it Mandarin Chinese, or something like that? I mean that is pretty tricky. And I am going to suggest he’s quite a busy bloke doing other stuff. But that gives him something.

You seek to take you away from the work to take your mind of it. And this is one of the reasons for, what I mean for, by for yourself.

It can help with your business but something that is, you know doesn’t have the business name in it. And it could be to write more.

Or they can tie on you. For instance, say for the first 30 days, for 1 month, you might say I am going to set myself a challenge to write 500 words a day.

For a book, for a chapter, for whatever it is, don’t just put something around it that makes it even harder to achieve, like for a book. But just write. This is if you want to write.

And the reason I am talking about that is because that’s what mine’s is going to be by the way.

And what you are trying to do is form habits, new habits. And when we do things over and over again, they become habits.

There are loads of things that I didn’t use to do whatsoever. That have become such a part of my routine that I’d feel almost personally ashamed if I didn’t do them. And that’s a, that’s really an odd thing to say but that’s how it goes. Really is.

So for, actually now I am not going to tell you any. But there are some. I mean so for instance, I don’t know. Say you get up in the morning, you brush your teeth once a day. Yeah, yeah I know, I know.

But people do. And then you want to add in. brushing your teeth before you go to bed. Which is by the way probably the better thing to do.

So for instance you do that. You add it in. eventually that becomes the norm. Because it’s associated with, and the time you do stuff, like when you go to bed.

And what will happen, is eventually if you don’t have an opportunity to brush your teeth before you go to bed. You’ll feel a little ashamed. You will feel like its not changing or underway, it’s wearing same clothes for a second day, or second month.

Some of you guys I’ve noticed. Or something like that, or not showering or you know that sort of thing that makes you will feel little, yaaah I didn’t do it.

And that’s the way you want to go. So get into a routine, so make it manageable but give yourself a challenge.

It may be to go out for a daily walk at 12o’clock. It may be to not, to not look at your phone, or else. No, say something easier. Not look at any social media for 1 entire day or week. Say Saturday or something like that.

So you can do it the next month. Or you could do it, say in January and then in March. Yeah anyway. You get the picture.

One of the things, one of the real reasons, as I said at the beginning is to give you yourself something that you can feel that you’ve accomplished for you, rather than you’ve accomplished with a team or for anyone else. Because you really want to do things for you, occasionally. And this will be for you.

Order one of those giants slabs. Half a kilo slabs and just munch through it. Unless of course you’ve just spent 30 days not eating chocolate. You know what I mean. It won’t kill you.

It is Thursday. It is time for Drive Time Podcast, and we are now reviewing, going back to the start because there are fantastic podcasts and those of you that haven’t listened to every 500 episodes will have missed this.

And today, no exception this really is good. The Chalene Show. She talks about confidence, commitments, self-improvement, family values, and work. She is an inspiration.

Not only that, for you guys, oh and few girls. She is blonde and she is very pretty. She is a fitness expert, but that’s not her thing anymore.

She inspires gazillions. Facebook following must be getting up to near a million by now. Her twitter and Instagram are huge. She in fact, she has a fantastic course on how to do Instagram by the way. And her social media impact academy, something like that.

She’s great, I’ve seen her on stage in Alley, in a room with 1300 people who were on their feet. But when you listen to her on a podcast, its good quality.

She is very eloquent, she has a lovely voice. She’s an expert broadcaster and she’s so kind of humble with it. You get the feeling she, when she interviews she talks. Oh you can listen to her. Anyway, why am I going on?

You go and listen to it. Don’t just take my word for it. The Chalene Show. Anyway tomorrow again, another fabulous interview.

Ones to Watch, these are the people you may not know about, and you should do. Then have a great weekend, and oh gosh, must be New Year. I’ll probably see you next year. Wow! See you then.