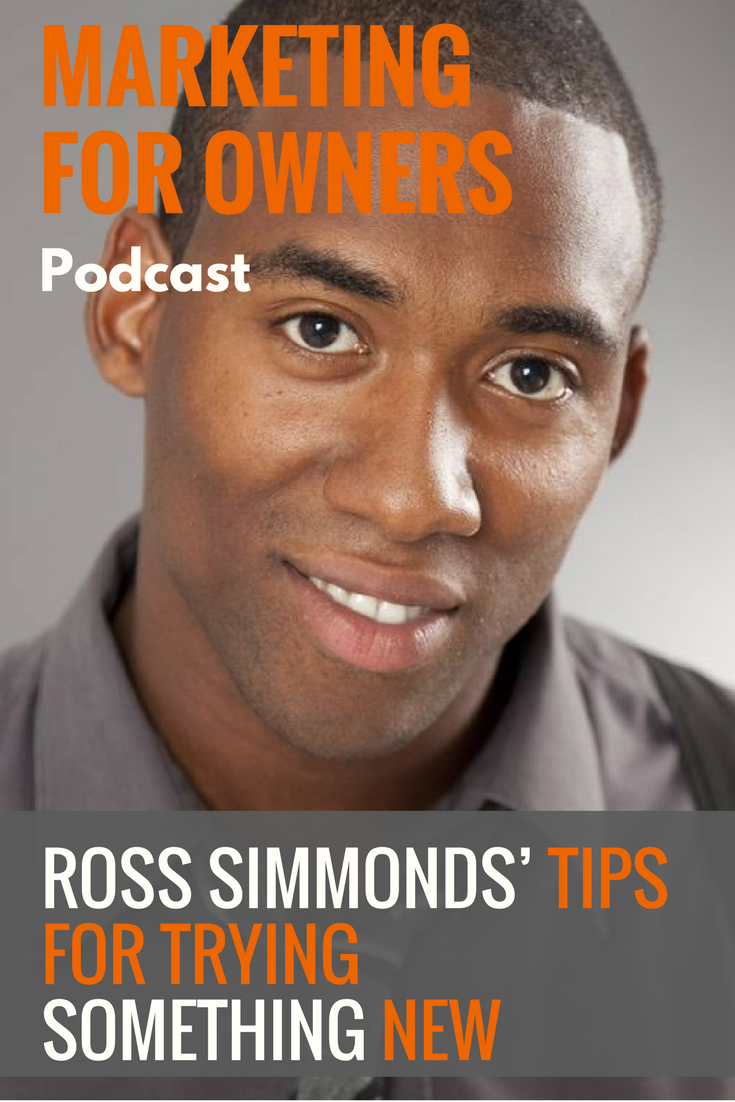 Ross Simmonds was always going to end up following in his Grandfather’s footsteps of being an entrepreneur. His ability to control his own time and schedule inspired and intrigued him.

At high school in the late 90s, he got his first taste of entrepreneurialism back when do-rags were in fashion. He bought some for a $1 each and then sold them to his friends for $5. Not only was he making a profit, but his friends got do-rags at half the price they were usually buying them for.

And from there, he was always looking for opportunities to create value for people whilst making a business which could generate revenue.

Whilst at university, he ran a fantasy football blog which helped pay for half his tuition fees by leveraging affiliate marketing and selling memorabilia on eBay. But as the blog got bigger, his grades began to fall and ended up stopping it after receiving a talking to from his mom.

That fantasy football blog is what set him on his marketing journey as he realized that anyone can make money online, yet all he was doing was pursuing his passions of sport and writing. He soon started a marketing blog which has since led him to where he is today.

He’s a marketing consultant for some big brands and continues to add value for other marketing and business owners with his other businesses.

At Hustle & Grind, he provides them with coffee as well as the information and support he wishes he had when he was starting out. And with Crate, he has created content marketing software to help marketers find articles they should share and then schedule them.

Ross shares with us how he persisted to become an entrepreneurial success, manages his different business, and is constantly experimenting to find new ways of marketing.

When Ross became a freelance consultant at 22, it was his first taste of working for himself. And by being that age with little obligations, he had no fear when he went into it.

Unfortunately, that didn’t stop him falling flat on his face and not succeeding, due to purely not knowing very much about the industry at the time.

From there he got a job at CBC, the Canadian Broadcasting Corporation. He was there for just a year before the entrepreneurial itch got too much and decided to give consulting another go.

That paid for a large chunk of his lifestyle before being offered the chance to work at a large agency with major brands. But guess what?

Within two years, the itch had surfaced again and he couldn’t help but scratch it one last time. The difference this time was that just weeks beforehand, he’d signed a mortgage agreement on a place with his girlfriend (now wife). And that filled him with fear.

However, he knew that if he didn’t take this chance, he’d look back on his life with regret. In the next year, he made more than triple what he’d had earned at his previous job.

Having the responsibilities forced him to make it a success. Ross has never worked as hard as he did during those first few months to ensure things stayed on track, and he’s been his own boss ever since.

The Right Way To Hustle

It’s only been recently that Ross has thought of ‘hustle’ as being a business term. Instead, he’d thought of it as a basketball term for when you need to keep going, no matter how bad you’re struggling.

When he thinks of hustling in terms of business, he doesn’t see 24 hour work days with no time off and no sleep.

Ross believes it is more about looking at the goal you want to accomplish and being willing to recognize that the only way you can get there is to put in the work. You may have to go above and beyond and make the odd sacrifice, but taking time off for yourself is just as important.

You have to look after your mind if you’re ever going to succeed, and not everyone has the ability to work the crazy hours which others do. Not having the stamina isn’t a problem, and you should definitely take a break if you need it.

Whatever you do, when you look back on your life before taking that final breath, you’ll regret not spending time with the people you love too.

Instead, you need to integrate your work, which is something you’re passionate about, with spending time with the people you love to create a life you can be proud of.

Not only does Ross run multiple businesses, but ones which are also different from each other.

Rather than looking at an individual business as being ‘the one’, he sees them all as being connected. It’s an organization connected together through a web.

He’s always throwing logs onto each fire to help drive more value and to grow. In fact, he likens it to juggling whilst wearing different hats.

But he wouldn’t be able to do it all if it weren’t for a supporting cast of people around him who he can rely on. Ross finds great people and then helps them to understand the goal and vision of the business. After that, he ensures they have the resources they need.

With systems in place, his team can contact him when they need to, but whilst also enjoying the flexibility to try new things.
The systems include what needs to be delivered over the next month, with quarterly goals and objectives set.

Plus Ross lives by his calendar. Everything is blocked out, including time to grab a lunch, to put the trash out and to write blog posts. By managing his time, he is able to ensure his businesses all move in the right direction.

He also uses short-term goals as well as long-term objectives.

Rather than setting a goal such as having 100,000 people visit his website in a month, he’ll instead set a goal to write four blog posts, knowing that will help him to achieve that target. The goal should associate directly with the things you’re going to do.

Over the past few years, Ross has been using a particular system to market his businesses.

He first finds mini pockets of people who love what he’s doing and then builds a relationship with them. With ten people who have an audience as well as a connection to the brand, they become the biggest storytellers and brand ambassadors you’ll have.

With his Crate business, he gave people early access to the app, and then made improvements based on the feedback he received from them. That meant that when it came to launch day, they were in a better position to tell the story.

Plus by asking them for help, the relationship becomes more meaningful, and they have a sense of ownership over the end result, which means they’ll, of course, want to share it.

Using a similar approach with Hustle & Grind, before launch he had just a landing page which people could then send their audience to. The influencer then also had an incentive to receive something for free if they signed up so many people.

Ross likes to always be building new things, such as trying a new project or a new type of content. Then he publishes it to get it out into the world. That enables him to then gauge whether or not it is successful, and to learn from it either way. Then he can decide whether it is something worth trying again or quitting.

The simple Build, Ship, Learn and Decide formula allows him to come up with ideas without having an issue in killing them if they don’t work.

A lot of people fall so in love with their experiments after investing time and energy, that have difficulty stopping them quickly when they’re not working.

He’s experimented with Reddit, Slideshare, Instagram, Snapchat, and a lot more besides. Along the way, he’s learned from his successes as well as failures.

And they’ve given him insights which his competition don’t have because they don’t carry out experiments. It allows him to always be bringing something new.

If the experiment is going well, he’ll keep it going until he no longer sees a return on his investment. But he will not write off an entire channel based on just one instance.

When he tried Reddit for the first time, he found himself being banned for uploading lots of links people were not interested in. So he went back to the drawing board to learn in more detail about the types of content they wanted. And he found that each community wants something different.

With the audience he was targeting being entrepreneurs, he found out what they wanted. So he started to write posts which were in-depth with no fluff, including backlinks for further reading and being backed up with data.

He made it to the front page of the subreddit, generating thousands of visits to Hustle & Grind, selling products and helping him to close clients.

And with Hustle & Grind, he’s had a lot of success using Instagram, with over 110,000 followers. On the other hand, with Crate where he is targeting marketers, he hasn’t cracked it yet, but she’s still trying.

When it came to giving Slideshare a try, he used it the same as everyone else and simply uploaded old presentation slides.

Following testing, he discovered people were viewing the decks in the same way they would a video with a story. So he’s been investing in and creating Slideshare decks which are stories, rather than just leaving them to try and figure out he might have said for each slide.

It starts with an introduction, ends with a conclusion, and the bit in between is filled with insights.

By treating it similarly to a blog post, the results have spoken for themselves. His Slideshare deck about Snapchat has more than 100,000 views. He also has other decks which have over 400,000 views.

And he’s done it by simply leveraging storytelling.

When you visit Ross Simmonds’ website, you can read his blogs where he shares the insights he is learned from the experiments he is running and has run in the past.

But also don’t forget to check out the great products and information he has at Hustle & Grind, as well as finding out more about how Crate can save you time with your social media.