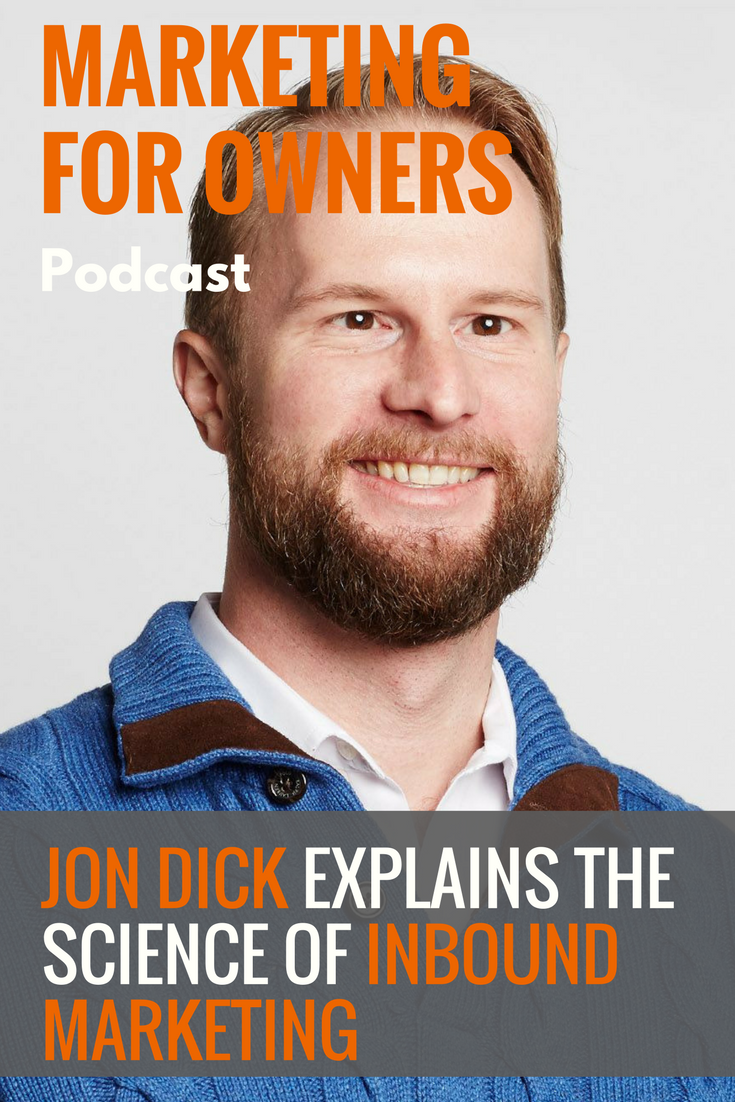 Now Vice President of Marketing at HubSpot, Jon Dick was once studying Physics with a plan of becoming a Physics teacher.

Surprisingly, it was a passion for improv comedy that took him away from that goal and instead towards marketing.

Being one of the only few people in the world to love Calculus, he went on to study it at the University of Massachusetts and then the University of Oxford. But it was when he saw he was spending more of his time focused on improvisational comedy, that he decided he should pursue his newest passion.

After moving to Chicago to do improv, he tried to find ways he could apply that in a professional manner. When he discovered that he had the traits of a great marketer, he studied for an MBA.

During that time, he wrote a paper about the social media analytics company Klout, which a friend then sent to the founder. Joe Fernandez wrote back saying Jon could pop in anytime. Within two weeks, he’d booked tickets to San Francisco and soon joined their team in 2012.

Discover how Jon has managed to quickly develop his marketing career, and how he has been able to use all of his experiences whilst doing this.

Although Jon did learn a lot about marketing during his MBA, it was whilst at Klout that he learned a great deal more about the tactics of marketing when he got into the real nitty-gritty of it.

And during his time there, his focus was on B2B products they could take to market and then creating a sales funnel for them.

When he and his wife wanted to relocate back to Chicago, Jon led the marketing team at Trunk Club, a men’s and woman’s clothing retailer who pioneered personal styling on scale. They pick clothes for you, send them to you, and then you choose what you want and don’t want.

Whilst there he was able to learn a lot more about B2C marketing, using mostly paid media, social media, and podcasts. And his enjoyment of numbers meant he was able to check that they were receiving an ROI on everything they did.

When campaigns were set up right, he could track traffic back.

With social media, they were leveraging other people’s audience through partnerships and influencers.

Tracking how these efforts converted meant he could see that although organic traffic accounted for a small amount, it actually had a better overall conversation rate. And in the first year he was there, revenue grew by 100%.

The way in which marketers run experiments based on hypotheses, and then try to collect enough data to get a conclusive result before informing strategy based on them, is very similar to how scientists operate.

Being a physicist before a marketer meant he was already comfortable with numbers, models, and their complexities.

Because when you try something new, you can’t just let it run without correctly monitoring its success. That way, you know it is worth continuing on with it, rather than just continuing it out of habit.

When running a paid advertising campaign, you have to be especially careful. You need to ensure you’re acquiring people profitably, and that’s especially the case if organic traffic is making more profit, as it may require a shift in direction.

At HubSpot, they invest heavily in content creation as that is where they see their focus. And of course, if that’s their focus, then they’ll have gathered data which proves that is the best path for them.

There is always a desire for new marketing ideas, and to test their new acquisition concepts. One example is bringing new people into their sales funnels through new software.

That’s because at the core of inbound marketing is giving value before extracting it, and free software fully embraces that concept.

And as these shifts happen, the sales funnel has to also adapt with it. With social media, rather than always directing customers to content, they now send people to their free software, and that’s proven effective.

The people who go into the funnel from there have a great experience and receive a lot of value. Ultimately, they then convert at a much higher rate.

HubSpot is not new to freemium software, but it’s only been more recently that they’ve become a part of the brand and marketing focus.

Having been dedicated to inbound marketing for a long time, you would say HubSpot has proved that it works since they came up with it. They now have a large catalog of content which is still bringing in leads, and they’re customers are benefiting as a result.

Unlike other types of marketing, such as Facebook Ads, you don’t see an immediate end to leads as soon as they end the campaign. Blogs are always working for you, long after you’ve forgotten you even wrote them.

So HubSpot is now trying to figure out how to integrate video content into their funnel too as Google moves beyond using just keywords to find content.

And they invest in the things which are going to be around for a while.

Video does require a lot of time, effort and money. But with Facebook Live increasing in popularity, the pressure of production values have become relieved. Viewers are now starting to look for something ‘real’, and their expectations are changing.

Over the years, there have also been a lot of struggles with making YouTube an effective form of lead generation. But video is looking to be a part of the future of marketing, and they’re going to try and make it work for their customers.

There is so much changing in marketing, and to help break things down, he puts efforts into two different buckets: the Content Bucket and the Distribution Bucket.

In the Content Bucket, formats are increasingly changing. A lot of marketers, including HubSpot, still use PDFs for their gated content. But the reality is that in the mobile age it simply isn’t interactive or engaging enough.

And with the Distribution Bucket, one prevailing issue is that email is declining. A lot more effort is required to make them so valuable that the recipients value it a lot more when they receive them.

Other formats are also being used, with Facebook Messenger becoming a popular way of distributing content through chatbots. Unsurprisingly, the engagement rates are far higher, and it is worth remembering that there are more people actively on messaging apps than on social media.

The trend of partnering up with others to create value for each other’s audiences is also increasing. You only have to look at the YouTubers to see they’re always making videos together.

From Jon’s time at Trunk Club, he learned that the fashion industry is very much into utilizing influencers. When you go on their pages, you’ll often see that those influencers only posting sponsored content, and yet don’t see a decline in engagement.

That’s often because they’re so good at bringing their own voice and personality to it, and their longevity comes from being completely transparent.

From looking at the data, Jon found that a majority of their success was to be found with the medium-sized influencers. With influencers who had between 50,000 and 80,000 Instagram subscribers, they saw a greater return on their investment.

Paying someone who had 350,000 followers gave them a far lower return, despite the greater reach they had. That’s likely to be due to the authenticity of the influencer and how the audience is connected on a more personal level with those who have a smaller audience. Influencers within that sweet spot benefit from a much tighter persona.

You can keep up to date with what Jon is up to by following him on Twitter @jondick.

And, of course, check out the HubSpot website to see everything Jon has spoken about, including their free software which will help you to get started, and the unrivaled advice on their blog.