Now if you are listening on any of those then you probably might not realize that these are all recorded as videos. I am sitting at the moment in South Surrey in British Columbia. Beautiful British Columbia.

In Canada, and I am sitting by the duck pond, it is blowing, the wind obviously picked up as soon as I decided to come out, but hey it’s not raining. It’s been raining all week. And I am doing this on a video.

So the reason I am going to tell you how to improve your videos is because I have done a few and I think I am qualified. Yeah, so how to do it without breaking the bank.

Because if you look up online, you’ll quite often find many different stories from different video experts. 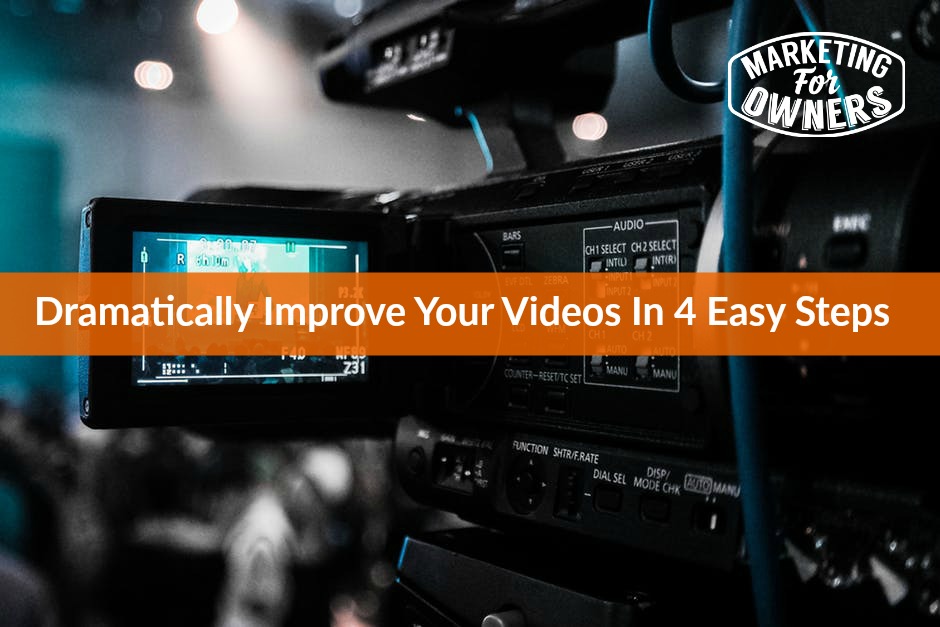 Well hang on, he says do that, she says no get one of those. And she says do it like this. And they say, it doesn’t matter if you don’t have good editing software.

Well that is all bunkum as we say. No idea what that means. But apparently we say it in England. We say lots of funny, we got lots of funny words. Don’t worry. We don’t know what any of them mean.

When it comes down to it, the same as your web writing, people are here or there for the content. They are not there to look at you. They don’t really care about you.

#1 You Need a Tripod

So video, the first thing that you should have is a tripod. And I am talking about when you’re videoing yourself like I am here.

You need a tripod or whatever you do really. There are many versions. I have a 3 leg tripod. I bought that off Amazon. I actually bought this off Amazon in the US.

Off the top of my head, this one will stretch up to 6 foot or 1.8 meters when it’s wound up and on 4 legs. That means you can have it at full height standing up.

Don’t get the lower ones, just get this one. This is a Polaroid. Its, there’s hundreds of them, look the same but just stick with the polar.

I’ve had a few others, they all tend to be the same, but this one, these have survived. Neither of them are broken, I use them pretty much every day.

Price, 20 or 30 quid. Something like that. But come on its nothing.

The other one is, you can use the little Gorilla pods. Which are by Jobey or there are many others where the legs bend and you can bend it around things like kind of tree, or on a fence post.

So you’ll find when I’m, when I’m off skiing in a couple of weeks, I’ll be doing ones out there and I will actually use one of those.

I am not carrying this thing around when I’m skiing, because I have got 2 ski poles like that. So I’ll have a little, one of these flexible ones that I wrap around a ski pole or round the chairlift. Because I do it on chairlift and things.

That’s the other one. Obviously you are going to have a little holder on the top, but again get those from amazon, they slide out like 3 quid or something. Make sure it fits your phone.

If you are interested by the way, I’m using an iPhone 7, I’m using the ordinary iPhone7. Before this I had iPhone5 and iPhone4 and I used them exactly the same, they are beautiful. Just dead easy.

Use your android anything. If you want to do fancy videos, by all means get a DSLR, but no need really, we are talking about saving money.

#2 You Need a Microphone

I have a microphone here. Do not use just the thing. This is a LAvelia. It is clipped on here, I’m so lazy, look the lead is just hanging out, I’ve not tucked in to my shirt or anything like that. It’s just there. You can’t see it can you? Even if you did, doesn’t matter.

This is the Rode SmartLav but now there are many others. So this would cost about 50 pounds I think off amazon.

But you should be able to get ones that are 20 to 30 pounds that will do the same job. So just make sure to check the ratings.

Make sure it will connect with your iPhone. Because they need a particular type of, in effect the jack plug has 3 black rings on it. Is it TTRS? Something like that. Anyway, one of those.

Because I am out here, and it is windy and you can hear me beautifully. If you’re wondering by the way, let me just show you this clever little thing. Because so if I take this off, hopefully you can still hear. That’s what comes on a Rode Lavelier.

That thing is stuck on the wind soft but it’s not enough to catch out all the wind. This is another one, of something else, can’t remember what. That handily slips over the top. And that is Jon’s secret. Because it really is windy. You can see the stuff behind.

Jon’s secret as to how to make the sound good when it’s windy, instead of having that whirring sound. I used to have before I had this set up. That’s all you need. Anything else, waste of time. This is just so easy.

#3 You Need an  Intro and Outro for Your Video

Next step, not equipment, this is an intro or an outro for your videos to get made on fiverr. Fiverr, right. Fiverr.com.  I hope you’ve heard me, I’ve told you 20,000 times.

Get lots of stuff done on there. Its $5 or 3 pounds 50. There are more expensive ones. I just someone had someone make a new outro for me the other day. And actually asked them to do what I wanted, to make a 3 second one.

They have loads of templates, they slot in the stuff they can do that makes you look more professional. And by the way, they are going to give you one that when use as a bumper on either the start or the end, or both for all your videos.

You are not going to pay them every time you make a video. They give it to you, you just edit it on, and you will be able to figure that out because you will look it up on YouTube how to edit on an outro, or an intro. Someone will show you.

Dead easy. You don’t need to pay people to do this and if you do, they still want to be given that.

But that makes you look so much more professional. Yes. If you do, one important thing, I would advise that you keep those to under 5 seconds.

Because see, people watch your videos over and over. They get sick and tired of it. And don’t let them use all those ridiculous sound effects. Where it goes clangs and whatever. Remember those people are just trying to show off. You just want something simple that makes you look professional.

Look at top YouTube channels. See what they do. Look at what they do on the news, on the TV, on programs, on sport programs, things like that.

See how they do it, and then go, aah that’s what they’re doing. Get something done like that. Seriously. Even video one off the TV.

#You Need an Overlay Thumbnail Template

That’s just as simple as that. So when you upload your video on YouTube, remember you’ve seen loads of them where the videos starts like this, that still is. Yeah. Because YouTube can’t decide where to cut it in. you can sometimes pick it but no, make it look professional.

Make your own, like a template. Make a picture, go to Canva, look up the YouTube templates, they’ve got one. Get one for free.

Canva is free. Canva.com. Do that and then you can put your title over it or your web name or something like that, or your social media.

It makes you look professional. And those steps will do it my friend. Do that, and you are already way ahead of everyone else. Whether you leave it on YouTube or embed it on your site, you should be doing this as well. And even then if you upload it to Facebook, you can do the same. Clever eh?

So that thumbnail thing by the way is just an image, when you upload your video onto YouTube, it will ask you if you want to use their thumbnail or upload a custom one. You just clicked to upload the custom one, put that picture on and they use that. Its yeah, it is that easy.

Okay, it is Monday, it’s Book for the Week. And this is a goodie. This is one of the all-time greats on content marketing and the state of modern, or what’s available in modern marketing.

It’s been updated multiple times, I think it’s on Version 6. It is ‘The New Rules of Marketing and PR’. It is by ‘David Meerman Scott’.

That’s all I will say. It is a fabulous read, you must read it because it is so appropriate, it’s ridiculous. I’ll be back tomorrow.