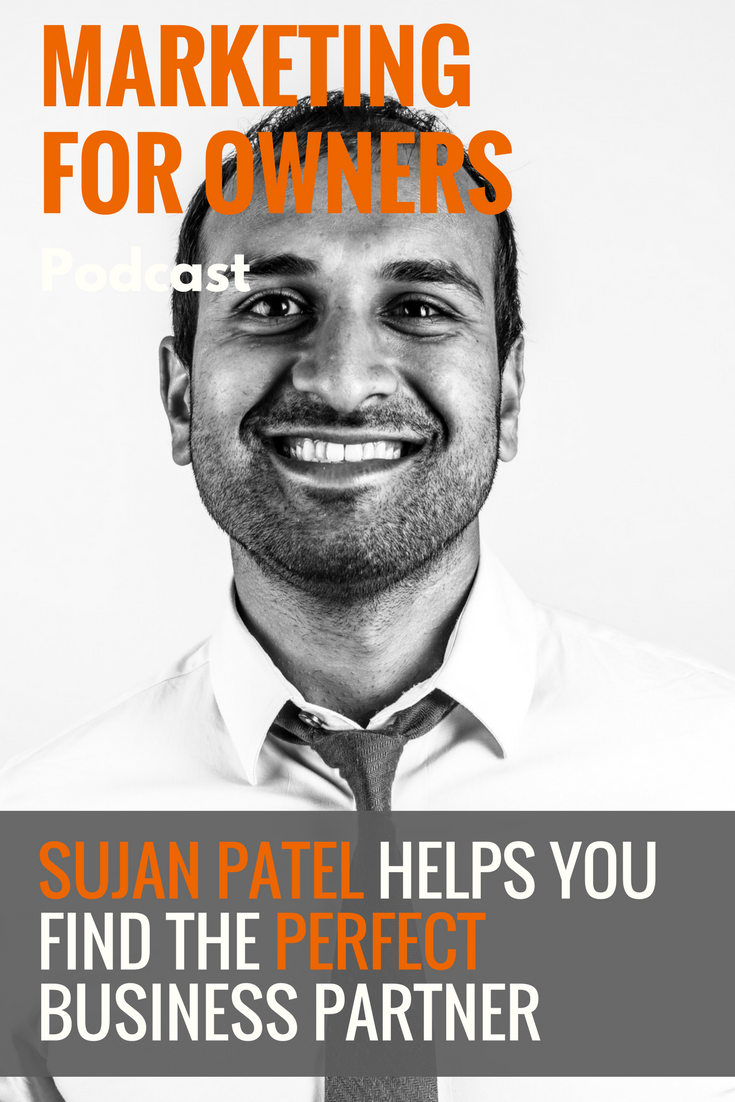 When Sujan Patel was still at school, he had made an eCommerce website and then learned the hard way about the importance of actually bringing people to it.

What he discovered at around 18 years old, was that he was actually pretty good at it.

With that in mind, Sujan figured out that there would be other people who struggled and would pay for his help in order to do the same themselves, and he started consulting.

The challenge at that young age was to validate himself and to not actually look like he was 18. By the time he’d hit 19, he’d unofficially started what would later become Single Grain. But it didn’t start well and realized he wasn’t as good at driving people to his business as he was to getting people to websites.

He put it to the side and got himself a job.

Four years later in 2009, he quit that job to focus on Single Grain full time, and actually convinced the company he was leaving to become his first client.

By 2013, he’d built it to a team of around 27 people and sold it in order to move on to his next challenge.

Along the way, a lot of his success has been thanks to finding the right business partner to help them grow. And now, he has multiple businesses to his name.

Two years after Sujan left his job to focus on Single Grain, he brought a partner into the business who helped it to grow. By having someone who could handle the sales and marketing side of the business, it left him free to handle operations and strategy, as well as managing the team and clients.

Later on, they even brought in a third partner, Eric Siu, who later purchased the business.

Sujan sold the business because he wanted to branch out, and his heart was more in creating software.

He is now able to have numerous businesses and a marketing agency, all of which is possible with having partners in his businesses.

Web Profits is a relatively new agency which he co-founded, and is also a partner of Ramp Ventures so far consisting of five sales and marketing software products. They are Narrow, Mailshake, Linktexting, Quuu and Pick.

Working together with other partners helps him to be better, as well as having people who are strong in the areas he is weakest.

When looking to go into business with someone, it is important to know what you’re good at.

While Sujan is good at marketing to get new customers, his partners at Web Profits are good in areas such as finance and business planning, which are areas he enjoys the least.

But he doesn’t just look for partners who level out his weaknesses. He has to look at it holistically, taking everything into account to make sure their visions also align.

He looks for individuals he knows he could go out and have a good time with. And because of the nature of the relationship, you have to be comfortable seeing them in their underwear, as there are going to be hard times and you’re not always going to see them at their best.

It needs to be a real friendship, and you’ve got to want to be there for them just as much as you need them there for you.

In the short term, you are of course giving up a lot and having a smaller stake of the business. In the long term, you will likely gain more than you’ll lose.

Not only will you all share the same objective, but you’re not trying to do it alone. With just one other business partner, you have twice as many people working to grow the business. That gives you twice the effort, twice the hours available, and twice the brainpower.

Sujan has spent years trying to get into developing a software product, but it took a long time before he succeeded.

Back at Single Grain, it simply came down to not having enough knowledge to make it work.

So when he sold the business, he went off to work with a client which was a software product. The intention was to learn about product development, engineering, operating, customer support, and sales. Essentially, everything other than marketing it.

It meant he gained hands-on experience, whilst also helping them to grow their business.

It was during this time he had an idea for a SaaS product and then found a developer to be his co-founder and business partner, together working on this idea.

Everything he was learning in his day job, he was applying to what he was doing on the side with his own ventures.

Even if it had ended up not working, it still would not have been wasted time or money, and instead would have been a good learning lesson.

But Mailshake did work out and has over 7,000 customers. Narrow was another of their products which found success.

From there, they then went on to buy other software businesses, and to grow them into successes too.

During it all, it is important to remember that you can’t always be perfect, especially when you’re starting something new. Whatever you do, it will help you to do better in the future.

Having been behind many software products, Sujan knows that growing a SaaS product takes time. Regardless of how long it takes, he carries on working towards the eventual win at the finish line.

When he and his partners buy a new software business, the intention is to grow them to their full potential. And they only choose products which are related to the marketplace they already exist in.

There are two reasons for only dealing with sales and marketing software. The first is because they already have an interested audience to who they can market it to, and the second is that they are able to continue adding more value to their existing customers.

When it comes to marketing these products, they benefit largely from word of mouth which happens naturally when they give people great experiences.

They also use influencer marketing to grow by having the right people talk about them, and with content marketing are able to make customers more loyal by continuing to provide them with value even after they’ve signed up.

When they go into a new business, they first look at the customer support tickets and talk to the current users. That way, they get a better understanding of how things currently stand.

They then look at the holes in the business which they can patch up and improve. But they also look at the assets of the business, which are the things it already does well and can be scaled.

It can result in them having a list of 20 things they want to do to improve and grow the business. However, they also appreciate that in order to be most effective, they should only focus on one route to growth at a time.

To figure out which should be their primary focus, they look at all the things that will help to grow the business and the potential impact they’ll have.

Sujan likes to cross-reference what will have the highest impact in terms of user growth, with what will take the least amount of work to achieve.

By putting things into that perspective, it’s easy to immediately rule out the bad ideas. Then out of those 20 things, only 3 or 4 things will remain on the list which are actually good ideas.

There are only so many things you can do, and when you conquer one thing, you can then move onto the next.

The key is to not over complicate it for yourself.

Customers Are Humans, Not Numbers

Through it all, it helps to not just think about the product. Remember that customers are real people and not just numbers on a spreadsheet.

One of the main challenges SaaS products face is churn. And part of helping to retain people is to continually provide users with more value so they’ll stick around.

Ultimately, people like to buy from other people. Thinking like that means you can make the decisions which will better help the people you serve, and will, therefore, have a positive effect on the business.

What will make them feel good about deciding to buy your product or service?

The first impression a customer has of your website and brand it critical, just like the impression they have after they’ve purchased from you.

For Sujan, he genuinely enjoys helping people, which is why he always produces content and is speaking. And it’s also why he’s been so successful.

He likes to see people grow. That’s why he got into consulting in the first place and has continued to be his driving force while making and growing SaaS products.

Make sure you check out Sujan Patel’s website, where you can try to keep up with what he is doing and read the blogs he somehow manages to write during his busy schedule.

And if you want to check out the businesses which Sujan runs with the help of his business partners, check out Ramp Ventures to see all of their software products, and the growth marketing agency Web Profits.