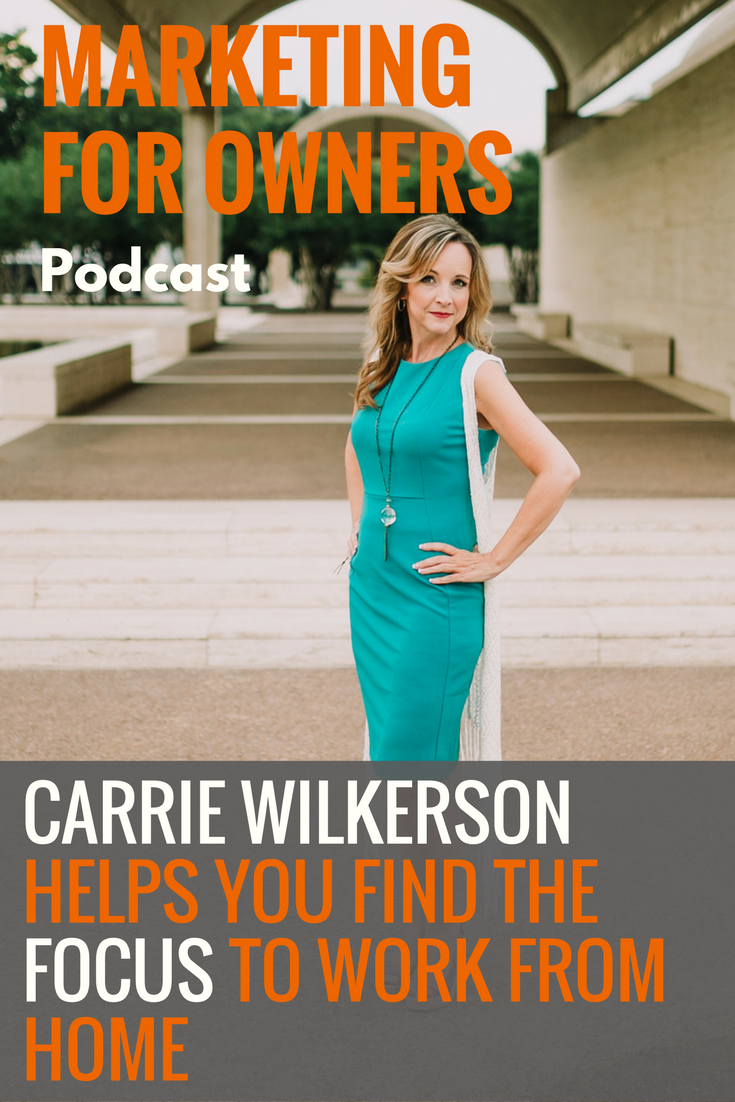 In a break from what successful entrepreneurs usually say, Carrie Wilkerson never had a passion, or even a big idea, for starting her own business. And she didn’t even hate the job she was doing.

What changed for her was the decision to adopt two children – a brother and a sister – which meant that being a Mom mattered more than anything else. Even though she loved her job, she wanted to stay at home in order to look after them.

Of course, it’s never as simple as that, and Carrie still needed to get paid every month. That’s when she made the decision to start a business and work from home in order to cover the paychecks in August 1998. Using books from the library, she worked out what she could do.

Signing up for ‘business in a box’ where she sold items to individuals and parties under the name of a recognized brand, allowed her the time to gain the knowledge she wanted in order to properly start up her own business.

Carrie shares with us what she did during those early years, and how she’s juggled working from home and being a mother to four children by simply focusing.

Starting and Growing a Business

That initial experience in business meant she was given the products to sell, and the marketing resources necessary to sell them. That’s on top of the useful tips and training they gave her during that time.

But she always knew that direct sales wasn’t going to be a permanent thing she would be doing, and was instead also figuring out how she could leverage her skills using her laptop, email, and phone to connect with people for business.

So she started calling past workplaces, as well as other similar companies and offering to work for them as a virtual assistant. But being in the late 90s, this was before it even had a name, and meant she had to also sell the concept of being a remote worker to them.

It was three years later that she was able to leave the direct sales model behind and start an online desktop publishing company. She had virtual assistants all of the US, working with up 1,700 per month.

Several years later, she sold the business and it is going strong today, and still, continues to serve some of those original clients. That means they have been paying every month since March 2003.

But even after she began hiring others, she remained CEO and a chief desktop publisher. By herself, she was capable of working with up to 200 clients at a time, but with six figures of debt to her name, and the intention of one day selling the business, she needed it to grow.

Leveraging the work of other people, she was able to create a margin which allowed the business to scale up, pay off her debts, and be saleable.

Challenges of Working from Home

Unfortunately, you don’t just get to hang around your house in your pajamas every day. You have to show up every day, and you can’t just give it your all once a month.

Over the years, money management has been an issue for Carrie, just like so many other things, such as the mindset of those around her.

Her husband is different to her in that he likes to work for other people, having that agenda given to him, and you, of course, have to understand that. You will also have friends and family who don’t understand what you’re doing and why, so watch out for people encroaching because you work from home.

You need to have the ability to say no to people, who will assume you can go out for lunch or look after their children whenever they’re sick and can’t go to school. Remember, you are actually working.

Because there is no-one giving you an agenda, and no-one making sure you get stuff in when it’s due, time management is important, as is productivity.

Of course, you also have to remain up to date with new technologies, as well as changing economies and trends. If you don’t do it, then no-one else will. And you can’t be stuck in your one way of doing business.

Just because something used to work for you, you can’t afford to mourn the fact that it doesn’t anymore. If you don’t adapt, then you risk dying.

Starting a business and working from home are hard work, but ultimately, it is also rewarding.

Carrie juggled being a parent on top of it all, and has found that people are dismissive of her being working from home as a mother, and has battled against preconceived notions.

People assumed that her husband went to work in order to give her the cushion to start her own business when the reality is that he quit work at 35 and ended up working for her for 10 years. That meant, she was the only wage earner in the house.

The Best Version of You

Carrie has started up her own businesses and paid off a massive amount of debt, as well as losing 145lbs (over 10 stone), which is actually more than what she weighs now, and is an impressive achievement.

Although a process which has happened over 15 years, it has been the past 3 or 4 years in which she has lost the biggest chunk of her weight.

All change starts with a decision, and not just an interest in doing it. You have to actually decide that things are going to be different before you take action. Otherwise, you’re simply just reading the books and blogs but doing nothing.

After that, you have to take the decisive action which will cause the change, as well as accepting responsibility for it rather than just passing the blame on.

That process is what makes you driven. Carrie never used to be particularly ambitious, but she has wanted to be the best version of herself as much as possible, whilst maintaining her core value and the things which are important to her.

She doesn’t want to be better than other people, just the person she was the day before.

And she’s only trying to be a good role model to her children and not the people who follow her on social media.

The key is to be okay with yourself. She prides herself in helping people to become the best versions of themselves, unlike some of the celebrity coaches who take your money in order to tell you how you can be just like them.

They promote themselves with an Instagram full of selfies with famous faces and fast cars, and people see the lifestyle they want. It really isn’t as easy as they might have you believe.

The people you recognize as mentors don’t have to only be the ones you pay. By borrowing a book from the library, or downloading free resources from websites, the authors become your mentors.

And she did the same with Mary Kay Ash, Brian Tracy, and John C. Maxwell. Even the bible can count.

There is so much information available to access that a mentor doesn’t just have to be the person sat at the opposite end of a table to you.

That’s not to say she hasn’t paid to be a part of groups and courses as well, it’s just that mentors some in many forms.

On the same note, Carrie ensures she only joins one group, course or conference a year, and it needs to be in a specific area where she wants to level up in.

Similarly, she isn’t on any email marketing lists, unless it is the person or topic which she is studying for that year.

That’s because it is easy to feel overwhelmed, and is often the reason why many people don’t start something. If you’re on 25 email lists and trying to do lots of things at once, it just doesn’t work and there isn’t any meaningful focus.

Carrie only takes feedback from people she is paying or being paid by. Take on the advice from one person, especially when you know they’ve done it themselves or know what they’re talking about, rather than trying to use lots of various and different types of feedback.

In 2011, Carrie Wilkerson released the book The Barefoot Executive, which is still available now in hardback, audio, and on Kindle. It’s the ultimate guide for being your own boss and achieving financial freedom, just as she has done.

She also has two new books which are soon going to press. In Move the Needle, she shares how small, almost in perceivable changes can transform your business, body, and life. Life on a Tightrope will be all about the work/life balance.

For further information about Carrie, what she’s achieved and what she does now, visit her website to also find her informative blog and resources. You can also sign up for her free 7-day video series about working smarter, not harder.