Today, I’m podcasting from one of the duck ponds here in Surrey. In today’s episode, we are going to talk about print, and not just printed offers, but print, in general.

A lot of people think the Internet would wipe out print, printers, especially. But it’s not so. Print is not going away anytime soon. In fact, some believe that the Internet has wiped out print, but that has not happened. So, what do we mean by print?

I’m going to talk about accountants for a moment. Just bare with me. Let’s use Ikea as an example. They print a few million catalogues every year.

Someone comes along and your business is tanking a bit, sales are going down, and you’re going to look for ways at cutting costs, and that’s where the accountants come in.

Now this is their job, so don’t get me wrong. Accountants are fantastic, and it is their job that they are not marketers. Their job is to look at costs. So, imagine someone looks at their catalogue, and says, “This costs us umpteen million a year to produce. But with the Internet, I’ve seen, that we can get it done online.

We’ve got an email list of over a million and we can email it to everyone. We can update prices, errors, new products, on the fly. The catalogue will always be current. It’s visible and you can read it on a mobile device, on an iPad, on the Internet. You can flip the pages. 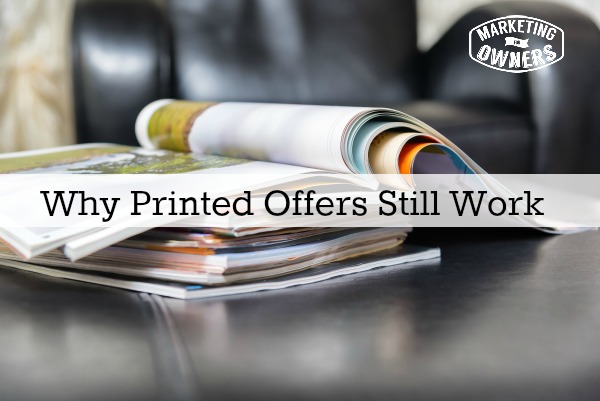 It even looks very clever, and you can even link in it. It’s fantastic, and it costs hardly anything. Because once it’s produced, it’s free. It just sits there. We’ll save millions.” That would be something that an accountant would probably suggest in such a case.

Now, a company I believe that did that was JC Penney. They cut out their catalogue, having done it for years. It was a big mistake that JC Penney realized and now, they have gone back to printing their catalogue.

People like to relax and read print. We’ve been using print for thousands of years. Someone invented paper and then John Bolt invented something do with printing.

Some people are lazy and want to save money, and they think, “All I have to do is email or print it online.” But, good for us, because we know different. Keep printing. Send out printed offers — small, half letter size, A5, leaflets – drop them in through letterboxes, do whatever you want.

You can make spectacular offers on these things. People read print. People are intrigued. People do not want to open their emails. It’s difficult. It’s only going to get harder.

Email is very effective, by the way. But in this case, don’t expect people to want to use what you wish to give them.

You have to provide everything they use. Catalogues still work. Direct mail still works hugely and works in conjunction with the internet.

Please don’t be lazy. Print will work. Do not get rid of your catalogue. You can make a smaller one, but again, do people want a smaller catalogue? Will it work as well as your other one? You can supplement it. You can add it online as well!

But it does not replace your original catalogue. Print works.

Newspapers can’t go online. People want to read a newspaper. It’s difficult to do it online.  Figure it out. Have an alternate one online, by all means that makes money and supports the printed one, but if you get  rid of your printed one, no one’s going to know who you are.

People want to relax on a Sunday and read a newspaper. They don’t want to flip out an iPad, and look at it on that. Books – yes! Kindle – clever! Lovely! Electronic books, e-books – cheap, free! Lovely! But, we’d love books. 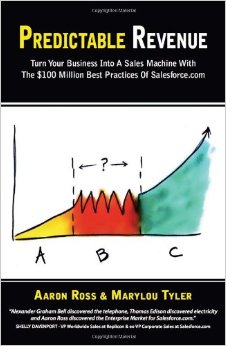 This week I am recommending Predictable Revenue. This book is by Marylou Taylor and Aaron Ross. I’ll be honest — I was not  excited about this book when I first got it. It was recommended by a friend, but I looked at it and was not excited but decided I would give it a go.

By the end, I was hooked and it’s fabulous. It is definitely in my top ten necessary books of all time. Aaron Ross worked for Salesforce. Salesforce is the world’s leading CRM. You must have heard of salesforce.com. If not, just go look it up.

In the early days, Salesforce wasn’t really getting to grips with the public. Aaron Ross, who is a salesman, came in and developed a system that took their revenues up hundred million dollars. Now, that is not a blip on the resume.

That is a headline on your resume. Pretty good. Aaron is a smart guy. What he did was he developed a system of lead generation and sales nurturing, and so on. He did it in a specific way.

He realized that there were several things he needed to do and for each thing, he created a system for that. Things like increasing leads, qualifying those leads, hiring specialist people, etc.

Each one has a specific job and no one does the other’s job. This is one of the biggest things I learned. They do specific tasks. Same as in any other business. We expect salespeople to be able to do everything. They can’t. And then, he developed a system to energize those salespeople without money and without gimmicks. Yes!

Your business is unlikely to generate a hundred million dollars. It doesn’t matter. I personally am not a fan of salespeople, at all, I don’t I use them. Never needed them. My systems are developed to not use salespeople. But the practices, the theory, the systems, apply.

Please go and read Predictable Revenue. There are lots of online resources that they mention that come afterwards. It really is a source of great information. It’s going to change the way you look at your business.