Today I’m talking about stories and how they can help your business really get going.

At Marketing for Owners, I help you create your self- marketing company, a company that does the marketing for you while you get on with the things that you want to be doing.

Stories are all part of that. If you want to market, you really need to develop your story and you have to have it nailed down.

Now I have mentioned before about having a story. I have also recommended books in the past about how to tell your story and how people get on with a more interesting story.

But it comes down to the fact that for millennia, if you take the Australian Aboriginals, they don’t have books and things like that, they just have stories, they pass them on from one to the other.

The Aboriginals they tell stories and it’s an art form. In fact, last week I did a podcast from outside the  Deal Castle and in Deal Castle a few times a year they will have events (English heritage put on events, and they bring in storyteller and the storytellers explain history but they tell it in story form).

It is 1000 times more interesting than standing there listening to someone lecture, but they’re actually telling you the same history. They just put into a story so it develops characters.

Now if you can do that with your company, your marketing and your message, it suddenly becomes more interesting, which make people buy into it, and people can empathize with you.

If you are stating a bunch of facts and please don’t tell me you’re still saying, “We are the UK’s leading marketing provider, etc etc”, or, “We are the…” ,.

If you are in America, you don’t realize there’s other countries, so you would say “We are leading online marketing provider”. You’re not.

The next person along says that, and then how can the customer tell?

In fact, I made this mistake at Fire Protection Online, we used to say we are the UK’s leading online provider of fire safety equipment.

Now we are, but everywhere else who copied us, everyone copied pretty much what we did. That’s what happens when you’re top of the tree, all the others who think the only way to be as good as you is by copying what you do.

Some take it as flattery, me, I take it as annoying. But they were copying me and suddenly we looked lame by just stating that we are a leading etc. etc. we are just saying the same as everyone else.

There’s no room for (“We were this first”) or something like that, or (“We really are”), the customer is not interested anyway.

All they’re interested in is what’s in it for them. So to get on their side, you have to spin that into a story.

So for Fire Protection Online, for instance, we explained how I used to have a company called Triangle Fire Protection and we used to maintain fire alarms, fire extinguishers, and our customers.

Included in Canary Wharf, The Crown Estate and all sorts of big names like that.

After a while it became obvious that to compete we had to do etc. etc. etc. and in the end I got so tired, I sold the company for a seven figure sum to one of our biggest rivals Kidder and stepped away from the game.

However, it gnawed at me that the business, it just wasn’t right, it just wasn’t done right. And then of course the Internet came out with broadband and faster speeds and this was before smart phones.

But once it came out with faster speed, suddenly it is possible to deliver a service via online by e-commerce to those people who were paying too much and getting the wrong service.

So I decided what better way to do it and I set off to start Fire Protection Online. Soon that caught on, the customers were much happier, the customers came back, we had many more customers, etc. etc.

And I’m just giving you an example of what a story looks like of putting it into words. Now that’s an off-the-cuff kind, but that’s actually pretty much how it happened.

If you accidentally say the story to the same person twice and both versions are different, what are they going to think?

So, develop your story, get it just right, make it effective. Before you decide it’s effective, state to somebody who has no involvement with your company or with you.

That quite often means at last there is some use for your mate down the pub, your mate whose opinion on everything else is not welcome, but on this he might be, because he’s not involved with the business whatsoever.

Tell them what the intention is, so tell them that you looking for criticism not someone to just say, “Oh yeah, lovely”. So get someone else involved and if they say, “Well, I didn’t quite understand that”, tidy it up, try it again.

Record it, have it transcribed, go to fiverr.com and have someone transcribe it for $5. You can’t go wrong!

Put it on your “About” page on your website. Put it as your intro video on your YouTube channel. Imagine how that can have a much more profound effect than just you saying, having it in writing, “The leading provider of…” okay?

That’s how this thing works, so nail that story down. 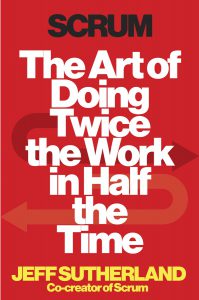 It is a Monday, and the book for the week is called “Scrum”, and it’s by Jeff Sutherland.

Now, “Scrum” is a phenomenon, it is fantastic, it’s a project management sort of thing, and before you start yawning and turning off, it’s more than that though.

What they’ve done is they’ve taken Project Management and turned it on its head, and the way on the front of the book it describes how to get twice as much done in half the time.

It’s developed because project management is pretty boring. They’ve turned it in, they’ve imagined it as a kind of rugby scrum; they have sprints, they have scrum Masters, they have all sorts.

Look at that, if you’re not going to read the book, just have a look at the website and the website associated with it.

So look up “Scrum, Jeff Sutherland” and everything they have to say about it. Maybe it will just catch a chord with you I and to be just what you need.

I know Amy Porterfield uses it as she has moved her project management and certainly talks about it a lot and gives a lot of information.

So if you want to look up “Amy Porterfiled, Scrum”, she will give a lot of information about how she uses it. But first of all, get the book, read it and see what you think.

I’ll give you some more info tomorrow.

What does your story say about you?