This is controversy, as we say in the UK, and I’m saying the things because I am English and we tend to be a little bit more blunt.

So, of course much material is marketed on the Internet. However, there is a whole category known as Internet Marketing where it only uses the Internet and it’s sort of marketing for the sake of marketing.

In general if you come across something online, when you Google an advert, if you come across anything that promises a system or a trick or a tool or some software will be able to make you more money, or will be able to increase the amount of money by an amount, and they tend to be specific, or it shows how much the person who is teaching you made and in what amount of time, then in general it is a scam. 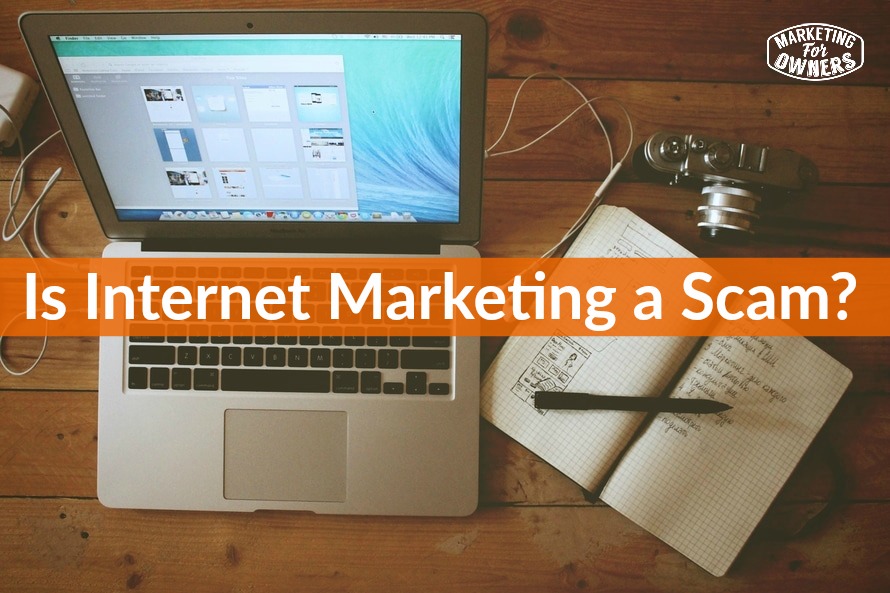 Now in the UK and in North America, we use the term “scam” differently and so it’s not such a bad turn in the UK, but the reason I’m having a rant about this, it’s a mild rant by the way, I don’t really have bad rants, is because people become addicted to Internet Marketing.

I mentioned yesterday about people not finishing what they started and quite often it’s because you may buy some course or some bit of software or some script or something that works, or an e-book and before you finished it, you’re buying something else.

Now quite often, it’s because the person or the company that you bought that from has sent you another great, irresistible offer that is unbeatable.

You are in the mood for trusting them because they sold you, they convinced you and you are in a, almost a vulnerable position where you believe everything they tell you.

Or, sometimes, by the way, it can also be an honest mistake on your part or on my part of the addiction is that the person has something wonderful.

So, with the Internet things, I am not going to name anybody by name but there are plenty of them. And it’s the same with stocks and shares and penny stocks and so on.

I’ll say this bluntly — if that person can make, for example, $5000 in 48 hours really really easily, then go on, knock yourself out, make $5000 every two days and don’t tell everyone else how to do it because you want to keep that secret, wouldn’t you? You wouldn’t tell anyone.

If you figured out how to convert flour and water into gold, you wouldn’t write an e-book on it and sell it for $29, would you?

Telling everyone how to do it and make a load of money. Wouldn’t you get all the flour and water and turn it into gold and make a fortune and keep the secret? I think you would.

A Good Rule to Live By

In fact, quite often when you buy that, they will then point out that one of the ways that you can make money easily is by telling all your friends about it and you will earn a commission and they may pay you 30, 40, 50%, perhaps more.

Therefore, you will make money easily because all different would be just as convinced as you, one day? And you will think, because you have just bought it, that they will. But they won’t.

However, that person sold one and if you do manage to sell them some more, it’s just a download, it’s just an e-book, of course it didn’t cost them any more to produce it and you are doing what they are doing.

Uou’re not making the world a better place, you’re convincing other people to waste the money and to get addicted and these sales letters are fantastic because they are written by expert copywriters and they are generally written, they’re generally sold by people who make a fortune doing this.

If they could just put their talent to doing something more worthwhile. Why don’t they open e-commerce stores selling products?

Because when you write an e-book, it’s written, it’s never printed, it makes 100% profit, just less the processing fees every time you sell it.

You could give away 90% commission and you still put no effort into making money, so it’s easy, once it’s done it’s done. And the same with lots of other things.

Anyone that promises to make you money is just not there, it’s just not going to happen, but you will be convinced that you could do this on the side and make extra and you are going to.

And I will just point out, people lie, they’re quite often not their car. I actually saw one where some guy had a Porsche and he admitted he borrowed it but he still drove around in it and in the next one, in the next second video he pointed out remember when you saw him in that Porsche, he didn’t remind you that he borrowed it, it was very funny.

But those checks are Photoshopped. You are thinking, no that’s not, it looks genuine, you can tell it’s genuine. It’s Photoshop.

Star Wars looks genuine; they are not really aliens and the Millennium Falcon isn’t a real space ship.

I do enjoy my life, but I just wanted to save you from promoting these people who just make a fortune and never get in trouble because they didn’t really do anything wrong, they promised something that you then tried and it won’t work.

And they will show that you didn’t do it right, so please keep your wallet in your pocket, don’t get out of those credit cards, do not buy anything at the first visit. Okay? Please. Go on, please. Tell me you won’t.

Now, it is a Tuesday, so time for a toolbox tip. Today I am going to show you another site that helps you get things done without you having to do it, using experts. Now this one is actually based in the UK, but they operate all over the world and they have become really successful. It’s called peopleperhour.com. So, like Upwork, like fiverr, Freelancer, you know all the others, but People Per Hour has a slightly different perspective on it. So if you, the best bet is just go and have a look. Look at the type of work that is offered and look at the way people offer the prices. It really is clever, it is incredibly popular, it’s a very fast growing company and they do great work. Go on, they’ve got people from all over the world, including the UK, including the USA, Australia and all of the lower priced cost of living places in between. These people are experts, go for it, peopleperhour.com. Click here to instantly download our FREE Book “The 71 Ultimate Marketing Tools”

Oh, by the way don’t forget to listen to our great interview tomorrow. I will be back on Thursday and I will be back to talking about ordinary marketing stuff. Don’t you worry, all rants over and done. Thanks for listening.