It’s a great question. How on earth can you do that Jon? Oh well, I am going to tell you. If you just hang on 1 sec. Now you are working flat out, you don’t have enough hours in the day, etc., etc..

It doesn’t have to be like that. One of our problems as small business owners, as entrepreneurs, as whatever you want to call yourself is that we have too much to do.

We cannot get others to do it quite often because no one else is good enough. No one else is as good as us at doing it. Yeah, yeah I know.

Yeah, you’re thinking the same aren’t you, and you kind of giggling because you know it’s not really true. But we think like that.

And the other problem is we can’t afford to pay someone else. No. but that’s because we got it all wrong.

Now this occurred to me a long time ago, and it happened back in my days of Triangle Fire Protection which is my last fire company years ago. I solved that in 2003.

When I learned this lesson things changed. Up to that point I was saving money by doing a lot of the admin, a lot of the bits and pieces myself.

Figure Out How to Delegate

So I figured out how to delegate. Now delegating is, is ah it is kind of an art, but we all have to start somewhere.

But the most important thing is who do we delegate to, who do we outsource to? Okay, so the outsourcing in the internet world generally talks about freelance sites. But it doesn’t have to be like that. There are other ways of doing it.

First of all let’s talk about the outsourcing websites, so or freelance sites. Now for those of us that  aren’t aware, there are the biggest ones like freelancer.com.

The second largest is odesk.com, and the figures, they don’t send me their accounting figures anymore but that’s, so they may have changed. But those are the 2 biggest ones.

Then you have slightly different version of fiverr.com. Now there are others, for those of you in UK. I mean these things are worldwide, okay, so it doesn’t matter where you ar.

There are people all over the place. I’ll explain a bit more in a sec. but there is also peopleperhour.com which I’m pretty sure is UK based business. But again works in the same way.

They are free to use. Now what happens with these is you go the website such as Fiverr, which charges a little tiny bit, like $5.

There are people all over the world from England to America to Canada, to the Vietnam, to China, to Russia, South Africa, Israel and Uzbekistan, and I say that because one of my top WordPress coders is based in Uzbekistan.

Fantastic guy. Anywhere, absolutely anywhere. Now these people in their own countries, in their jobs quite often do, are experts of something.

For instance just give you an example, say somebody works at Pixar, the animation company. Obviously Pixar are fantastic.

But they have a lot of staff, there are thousands of staff putting together those movies. But those individual staff are brilliant in their own way.

So you got someone there who is an expert Pixar animator. Now he is not Walt Disney himself or herself. But in their spare time, why can’t they use that skill to do individual jobs for people.

So if you’ve got a job that requires some expert animator. You can get someone like that, who’s doing a bit of part time on the side work through one of these freelance sites.

You put it out there, you put a description and people, you say what kind of job it is, is it website design, research, search engine optimization, all stuff like that.

Then people bid on it. And you look through and you have their history, kind of like eBay, are they brand new, have they ever worked on this, are they trust worthy, what are the ratings from people before, and you just get them to do it.

Now if you go to site like odesk, you can actually, as well as putting out projects, you can have people do ongoing work by the hour.

You can pay them by the hour, and you’ll see, you’ll think to yourself how do if know they are working? Well don’t you think these sites wouldn’t have thought of that? They have tracking mechanisms, all sorts, just look into it. It’s brilliant.

Now, and so for instance, at the moment I have got some pay per click on google AdWords work. I have got a guy from France who doesn’t speak much English, doing work for me, I have never met him.

I have never spoken to him. The guy is brilliant. I’m paying him $40 an hour to do work for me. He is great. Saved me a fortune so far.

But the other way is to ask around. It is very important that you do not have your spouse do the extra work for you.

That is never going to work because then, and I mean a spouse who doesn’t have a full time job working for you.

If you get your spouse to do bits and pieces, then you have someone else in the family who sucked in spending hours and hours.

You can go to your local university, you can put a job ad out there for a part time, or for a contract, or for a temporary period.

People, there are mums who are brilliant, geniuses at work, who then choose to have children and who want to be at home with their children but are going stir crazy (8:25), their brains are very active, they got nothing to do apart from going goo goo goo goo, gaa gaa gaa gaa, you know all that stuff.

They want to exercise their brains.

Until you’ve tried it, you won’t know how easy it is. This is how I got going. When I started Marketing for Owners, I hired someone, I met in the pub, yes. And yes turns out, she is a trained lawyer, but wasn’t working. So great.

So there are all ways, now the company is fully staffed, I don’t know 12 or 14 staff something, and I don’t even go.

And I’m not an expert, I’ve never been trained to how to recruit anyone in my life. I’m hopeless at interviews. Absolutely hopeless. So, and that’s why I am not allowed to interview anyone anymore, and I managed.

Part timers everywhere, I in Marketing for Owners, Harvey does the videos. Jennifer looks after pretty much everything, and the website, and everything and all the posts and keeps me on track.

Carolynn does a lot of the organizing for the Owner’s Club. And these people, are not contract. They are all part time and they are in all places around the world. What more can I say. So easy as that.

So just try it. Remember you don’t have to outsource them all over the world, you can do it locally, you can do anything, just do it. 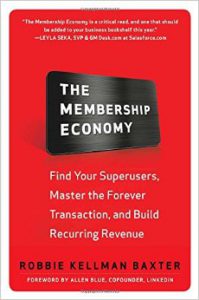 It is Monday, it is time for the Book for the Week. And today we are talking about a book called The Membership Economy.

Now it’s by a gentleman called Robbie Kellman Baxter. And what effectively it does is it talking about membership. Now you might think, ‘Oh I don’t have a membership.’

But it’s talking about how things like Netflix and other companies have generated all their income.

But it’s a great read because it’s going to give you ideas. Because if you could get a continuity program where people pay you monthly or quarterly, they are longer term customers.

You get more out of them, they are more loyal. It’s a very good book, I recommend it. The Membership Economy.

I will be back with another tip tomorrow.