Is this still going? Is yellow pages still there? I am not even sure. Who knows?

But the yellow pages was easy, back in the day, don’t forget I’m old. That was it, if you’re out of business in UK, you just put an ad in yellow pages and you pay them a fortune.

Our only record of success was the fact that we didn’t use any other advertising.

And we got lots of new customer inquiries. So we figure this must be working. So we spent a fortune but then we stopped spending a fortune because we didn’t know if it was working or not.

And we assumed it was. And we thought, oh we can’t not spend that because surely it’s, that’s where all our customers are coming from. That’s not good. Because we are just firing it at everyone. 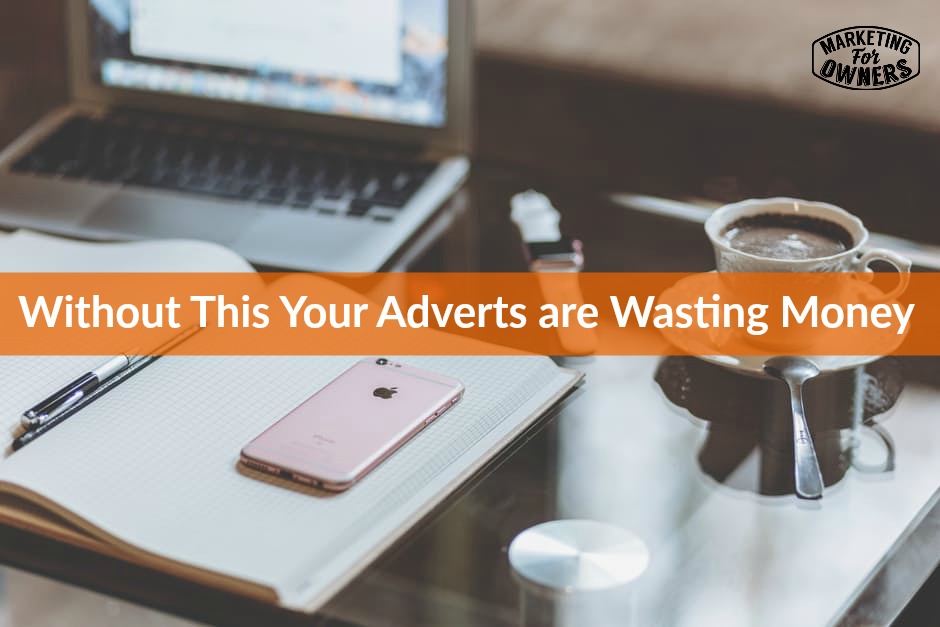 But in the modern era, first of all good old yellow pages is dead and buried pretty much. And good because what a scam. Just taking our money and doing nothing.

These days we use Pay per click. Or in my business Pay per Click, google AdWords, Bing and that kind of thing. That is easy to trace.

But what is important, we can still be wasting our money on those particular adverts. Because you need to know one particular thing. And this applies to everything, whether you want to put it in a local paper, in a national magazine, in an industry special, in a flyer.

And this one trick, well, one it’s not even a secret. I’ve told you before. You should only be placing your advert or putting your adverts in front of potential clients.

Put It In Front of Potential Clients

Now what I mean by that is there are some people who would never be interested, not in a month of Sundays.

But say you are in the hotel trade, you make the baggage trollies that they have in hotels, those things with the big 4 bars over the top.

Okay, quite obviously you have a limited customer base. It is not worth putting an ad in local paper saying we sell hotel trollies or whatever those things are called.

You only want to advertise them to hotels and people that have visitors come along and need to transport luggage and things like that.

It could be rock concerts where people send, put all those speakers and gear at the back door, and want to get it over to the stage. That kind of thing, there are going to be other sources, but mainly its hotels.

But when it comes to hotels, it’s not even guest houses. It’s not even small hotels, because if they have not got an elevator or lift, as we say in England.

Then those things aren’t going to be a lot of use. If it’s an outdoor motel in Australia, where the doors or even, you know are outside, generally people park outside the door and then just carry their stuff in. there is a limited audience. Do you get what I am saying?

Know Exactly Who Your Audience Is?

So you need to know exactly who your audience is. Now that’s a kind of easy example, but is it? How do you advertise to just a particular type of hotel that would be interested in that product?

If you are spending around $1000 a month on adverts, perhaps you could cut that down to $700 a month by cutting out the ones that just aren’t going to the right audience. You need to know your audience. So how do you do that?

Well its called customer profiling, you can call it an avatar, or whatever. There’s all kinds of, persona. All sorts. In our system, we call it potential. Because they’re only, they are going to be potential customers or existing customers. Don’t forget, you can advertise to those.

So first of all, I am going to assume you are already in business, you’ve got customers. You need to talk to those customers and figure out some similarities.

Write Down What You Know

So you need to know some stuff about your customers. SO Write it down. If you don’t, use your common sense.

If you don’t know ask them, survey them. It’s quite normal. When you buy a new fridge, refrigerator, quite often certainly in the UK, you get little thing afterwards to try and sell you insurance that asks you, if you give them all that demographic information, fill in a form with all your information, date of birth, do you like reading books, do you like riding bikes?

I mean that’s all extra demographic stuff, you don’t really necessarily need that detail. But they ask all that information in exchange for a bit of free insurance, because that information is worthwhile to them, they are building a profile.

Facebook knows everything about you. That’s why those adverts that you see on Facebook, yes. If you haven’t noticed, yes those are adverts, those are tailored just to you. The reason in your Gmail, you might get ads for say singles or dating sites, is because google knows you are single.

Facebook knows you are single, married. Remember the status, it knows what job you do. It knows what type of people you follow.

That’s the same, you are not going to get that level of detail. Facebook’s got more of it than anyone else on the planet. More than google. But that’s why those adverts are tailored just for you. Nobody else is seeing the same adverts that you are seeing.

Knowing Info About Clients Helps You To Know Where to Advertise

So you need to know that information about your clients. Once you know that, you can then figure out where they look. What magazines do they read? For instance, if you, if you are advertising to schools, there must be loads of magazines that schools read.

Have, why don’t you ask a bunch which trade magazines do they read? Which ones don’t they read? And then advertise in those. In the ones where they do read.

And if they don’t read any, don’t advertise in them. Get a, get a consensus, don’t ask just one person or two. Yeah, this all makes sense.

Say there’s 10 trade magazines and you can only afford 2 and it turns out that when you speak to people, say I don’t know, never read those. You have been wasting your money. Do you see? This is important stuff. And it’s all about saving money. So that’s it. That’s my tip for today.

Another tip because it’s Tuesday, its Tuesday Toolbox tip. Now let’s talk images on social media. So if you want know there’s quotes that people put up on Facebook and Instagram and twitter, and probably on snapchat as well, and Pinterest.

Well you think they are graphic artists. You don’t have to be, there’s free stuff. Now there’s a fantastic tool called Pablo, by Buffer.

Now Buffer, our friends Buffer do the scheduling tool which is also, there’s a free version. We use the paid, which is I don’t know $10 a month which is nothing. Fantastic tool. We wouldn’t be without it. But Pablo by Buffer creates all these images.

You’ll get to the site, there’s a little video, shows you how it works. You select the background, you select the word, you put the text in, you select where you put it,  and then you just share it to Instagram, to Facebook or twitter or wherever and hit the button. Click here to instantly download our FREE Book “The 71 Ultimate Marketing Tools”

Or schedule it in Buffer. How cool is that? You can do it easy peasy, lemon squeezy. Don’t give me those excuses. And that’s it.