Today I want to talk to you about consistency. Now it’s, kind of, I’m just thinking, is it a pet peeve of mine, possibly. I think so.

I think many of us forget that life goes on around us, and life is formed in a particular way. And now of course some of us want to be rebels, and don’t want to toe the line, or to be non-conformed, and all that kind of stuff.

However life and people in general conform to the norm.

And we are accustomed to things being as they are. So the best way for us to fit in as marketers or business unless disruption or non-conformity is part of our message, is to conform to the norm to an extent. 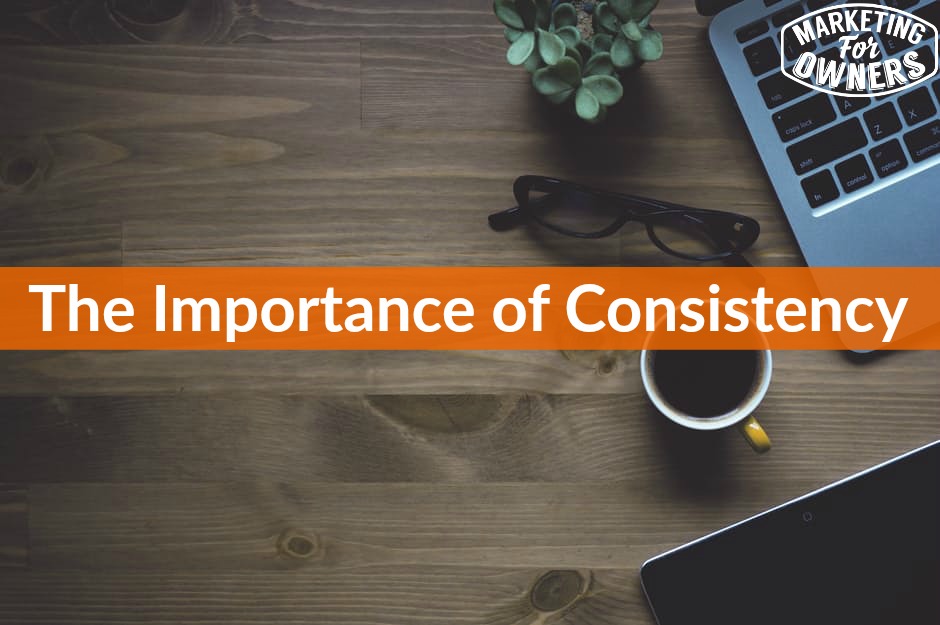 And all I mean by that is, one of the biggest ones being consistency. So for example, with this podcast, I put out a podcast 5 days a week.

Every single Monday there will be a short 10 minute video and podcast from me and it will recommend a book for the week at the end.

Every single Tuesday, today same again and it will recommend a Tuesday Toolbox Tip. On Wednesday we have the Expert Interview Series which is about 35-40 minutes interview with one of the world leading expert in their field. And that’s audio only.

And Thursday another video with me and ends up with a Drive Time Podcast recommendation. Friday is another interview, again audio only.

Same sort of time, 35-40 minutes and that is our Ones to Watch which is up and coming people or people perhaps you haven’t heard of that are doing great things. Successful entrepreneurs, people we should be watching and should be listening to.

Now if you’ve listened for any length of time, you’ll know that is the format so you’ll know what you are going to get.

So if you want a quick catch up, you’ll know if it’s a Thursday, you can get one. If you like the interviews, you might just tune in every Wednesday and every Friday. But they come on the same day. And the reason for that is just simply based on, say the news on TV.

I mean in the UK, the news is on at 6’o clock and 10’o Clock in the evening. Everyone knows this. In fact it used to be on the BBCs, used to be 9’o clock news.

Then iTv was 10’o clock. Strangely the BBC changed its 10’o clock. Everyone was up and up for. Now we can’t even remember.

But it will be on every single day at that time in weekdays. Everybody knows. If they just randomly put it out at any odd time, you wouldn’t know. You’d be frustrated and you would find someone else that puts it out at a consistent time.

Also with TV shows. I know, I don’t mean, I know this is obvious but just think of what I’m explaining. With TV shows, they are on at the same time.

And the show afterwards is going to be someone else. It’s about that. You may not like it but it’s consistent. So whatever you’re doing needs to be like that. That is how it is done.

So I don’t just regularly put a podcast on the same day, just to show off. It’s because my audience, you my beautiful listener.

So social media is a prime example. So many people will post randomly. And when I mean randomly, I mean like one day and then 2 weeks later.

And then the next day. And then a month later. That isn’t going to cut it. Even in the day, you need to use tools such as Follow a Wonk or some of the things, some of the tools in the background of Buffer.

Or they probably got it in Hootsuite and things like that to find out the most effective times of the day that your audience will be on twitter, and you need to post at those times, and be consistent. Be at those times.

On twitter you are going to have people who love your content. They want it when it’s going to come. Now I know there’s lots of random stuff, but that’s replying to people’s messages and things. But when you are putting out information, your information.

There’s going to be people who want it. Same on YouTube. Do things consistently. Now of course if you are only going to put something out every 2 weeks, consistently put it out every 2 weeks and tell people so that they are expecting it. And be there, and have it there for when they expect it.

If you are going to go away on holiday, pre-record stuff and schedule it. You can schedule in anything, in all your social media things, again use Buffer, it’s free.

This, if you are watching this on the website today, this wasn’t actually put up today. This was put up before, and scheduled to be released at a time of the day on this date. Otherwise all the podcast would be ready in advance. That’s how it looks.

So consistency. Now I hope that’s a simple explanation because I don’t want to have to go on and on, you know I do go on and on about things. But it really really does work. Alright. Do not, you can still do random stuff. But the core has to be at certain times, days whatever. And that by the way applies to emails.

Please don’t post lesson once a week. But make sure it’s going to be the same day every week. Because then people will expect it. Of course you can throw a random ones. No problem. I hope you got the gist.

It’s time, it’s been mentioned it’s Tuesday, it’s time for Tuesday’s Toolbox tip. And today, this will help your social media efforts. It’s called Word Swag. Recommended it before. It is one of the best app on mobile design apps going.

It is a paid one but when I say paid, it’s an app. looked it up, it actually cost like 3 pounds something in the UK. So it’s about, I don’t know if that equates to dollars, whether it’s $5 or something.

But big deal, if you cannot afford that, please turn this off now, go get yourself a job. Yeah, you know the score. Honestly, just buy it.

But if you’re using Instagram, Facebook, twitter, everything is image heavy. This makes it, it adds all the text, it adds fonts. It just is idiot proof.

It’s well worth a try. I promise you will love it. There are others but Words Swag is one of the most popular ones. It’s been around for ages, that’s why they can charge. Okay, give it a go. Let me know what you think.

Tomorrow, by the way. Remember I said is our Expert Interview Series. You are going to love it. Be there or be square. See you soon.