This is a special episode today, on the day this is published. Of course you may be listening to this years later, or you may be an alien catching it about three hundred years later; in which case you missed this.

But today is the opening of the Owners Club, Gold Level. Now I want to tell you why it is essential. So in effect, this is sort of an advert, so I am being really up front, but it’s my show I can say what I like.

I won’t be long, don’t worry, it’s all an advert, but it is not a big sell. You know when you go on those webinars and at the end it says “Well, with all this added together, this is a total value of fifty eight thousand dollars, but I’m not going to sell it for that, nor even twenty, nor even ten, it is going to be ninety nine dollars!”

No, none of that.

So let me explain. When I started in business, yeah yeah yeah, I know, old bloke, long time ago. I didn’t actually start in business I was self employed. 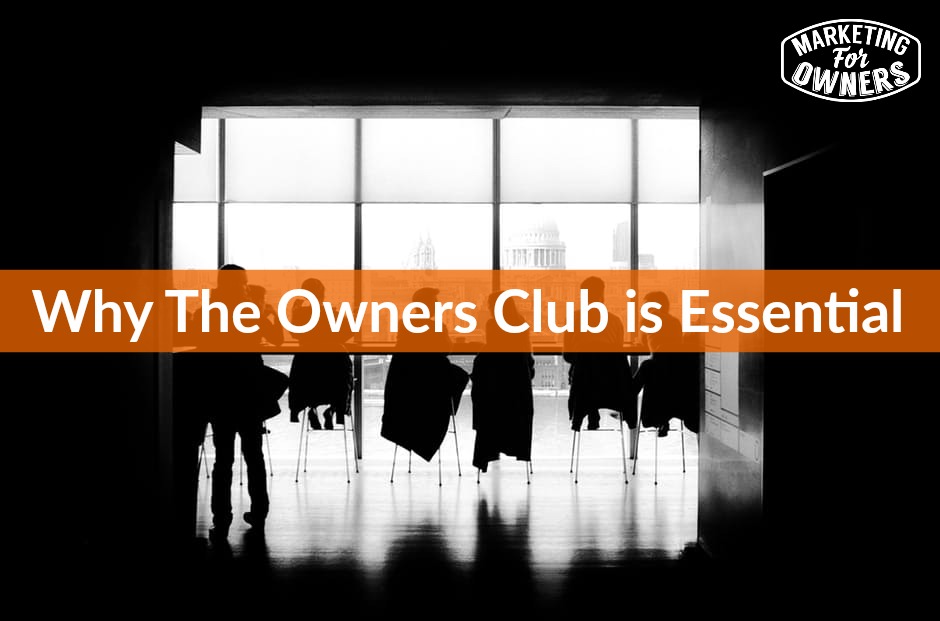 I mean you can convince, you can say what you like, but most people who say they are entrepreneurs are simply people who do not have a job and don’t have any money. Honestly.

So when I was self employed, I worked along, I plodded along and then I decided to start my own business; I was doing exactly the same thing, so one day I am self employed one day, another day I have a business title doing the same thing.

I was no different, I knew nothing, I had no friends who had their own businesses, everyone had jobs. None of my family had businesses, none of my extended family; I mean I am not including those who were also self employed.

So my brother was a carpenter, in the UK we call them a chippy, my uncles and in fact even my step dad all tended to be carpenters; I don’t know why, it’s not like a family of carpenters, it’s just coincidence. But they were self employed, they just worked job to job.

So I had no influences, so I plodded along, I did what I did. I didn’t make any money…well no, actually I made good money but I then spend it all, I had no what to do with it.

When I went into business and then I had expenses and I had an office and things like that, then I didn’t make any money because at every point where I got busy I had to employ someone to do the work that I was then having to do so that I could go and get more customers.

So I looked at other ways of doing it, I modeled the big companies and it suddenly became successful. But when you build a successful company, you have to spend money, you have to borrow it from banks, you have to get stock to sell it because the people who pay you are going to pay you way later this was the old days. Anyway it goes all on.

There was nobody to give advice, I had to learn, I had to figure it out, test, make it work. I made good money but running a business was not enjoyable and I sold it. This is way back in 2003. I imagine most of you weren’t even born in 2003.

The entrepreneurial type of mind, you know the ideas buzzing around of what you could do next, works hard and fast. So I learned online how to do it, because that’s easy, it seems easy, it sounds easy, you don’t have to do anything, you are online. But this was back in 2004.

A few years later I accidentally started another fire safety business. That is a whole other story. But if you want to know how on earth someone accidentally starts a business, then get me on a call and I will tell you all about it. Seriously, I had no plans to do this again.

To get to the same level of turnover took me two, less than two actually, but let’s say two, because I had then learned that you learn from experience, you learn from others, you ask questions and you find out.

Don’t task “yes” men, don’t ask your family, don’t say “Oh, what do you think of this new website?” And they will go, “Oh, that is wonderful. Oh, that is lovely. Well done you.”

You want people who will say, “Have you considered…and what about that? Look at so and so’s site, they don’t do it like that and they are very successful.” You want that kind of advice because you don’t want to waste twenty years.

So fast forward, I still don’t like the term entrepreneur, I have to admit. I own various businesses and I do okay. Now in and amongst this, one of them, also one of the more important things I learned was how to make my business not dependent on me.

Years ago I read The E-Myth and once I read that, that just clicked. The E-Myth by Michael Gerber is still for me the absolute must read book of any small business owner, in fact larger business owners as well. I don’t care if you are just starting or if you have been in business for twenty years, just read it, it will open your eyes.

That’s another thing, until I had a read that I had never ever read a business book. I have read gazillions since. Who knew?

But what I learned in that was my business didn’t have to be the horrible one that I didn’t like and so I had to sell it. That’s why I sold it because I didn’t like running that business. It made loads of money, but I didn’t like it. Yeah, if it is not enjoyable why do it? You have got a whole life ahead of you. So I sold it.

The E-Myth taught me how to it differently. So I no longer run my business. I mean technically I do, I am in charge, I know everything that goes on, I know all the sales, I check out the statistics, I get reports, I know all the ins and outs but I don’t open the post, I don’t know the little minutiae, I don’t know if something broke.

So for instance, when I was last in, we got a new forklift truck. These things cost a fortune but I didn’t know and it is a lovely green one; the last one was orange.

But I couldn’t even tell you where we got it, but it happened, I didn’t have to make the decision. How cool is that? How much does a fork truck cost? Yeah!

The Owners Club is what I needed when I was growing up in business. It is like a mastermind, it is that help, it is that information from someone who has been there, done that who can help you, who is on call to help.

Who do you ask who has had that problem? Do you ask your friends down the pub? How is that going to help? How encouraging have people been to you down the pub, who are not in business? Did they all say, “Why don’t you get the proper job?”

Because my mate Michael Gerber who is now a friend, he made me concentrate on my dream, I want anyone who was like me before in that twenty years to have access to this.

Back then if someone had said to me “Well try this, it is a hundred quid a month” or “It is a two thousand pound course”, I would have said “Well, maybe when I can afford it.” You can afford twenty nine pounds a month.

And in fact if you join, if you don’t like it, I give you my personal guarantee, if you say in it the first thirty days, in fact take the whole thirty days, the whole month, I will give you your money back. It is okay, it is okay, I am on your side.

But in all that time you can get me one on one. You will get Q & A’s, you will get training, you will get the Website 101 course it’s for sale for two hundred and ninety nine pounds; that’s included.

It’s not just me by the way, there is a team. But get me on a call and let me prove I can help your business, it is going to be good, as simple as that. Oh and if you want to know how to get there, just go to, you can go to theownersclub.co.

If you also worry, we have a phone number in the UK, we have an office address, amazing. People with internet stuff don’t have things like that, you can phone up. Go to that website, go and have a look, theownersclub.co, as simple as that. Twenty nine pounds a month, that’s it.

And whatever you pay now if it ever goes up, that is the amount you pay, your price will never go up, you will permanently pay that forever.

Thank you for listening. By the way, if you want to know how tough it is to run a business, listen to tomorrow’s podcast because I interview Rand Fishkin, yes him of moz.com.

You will love it; I will see you on the inside.