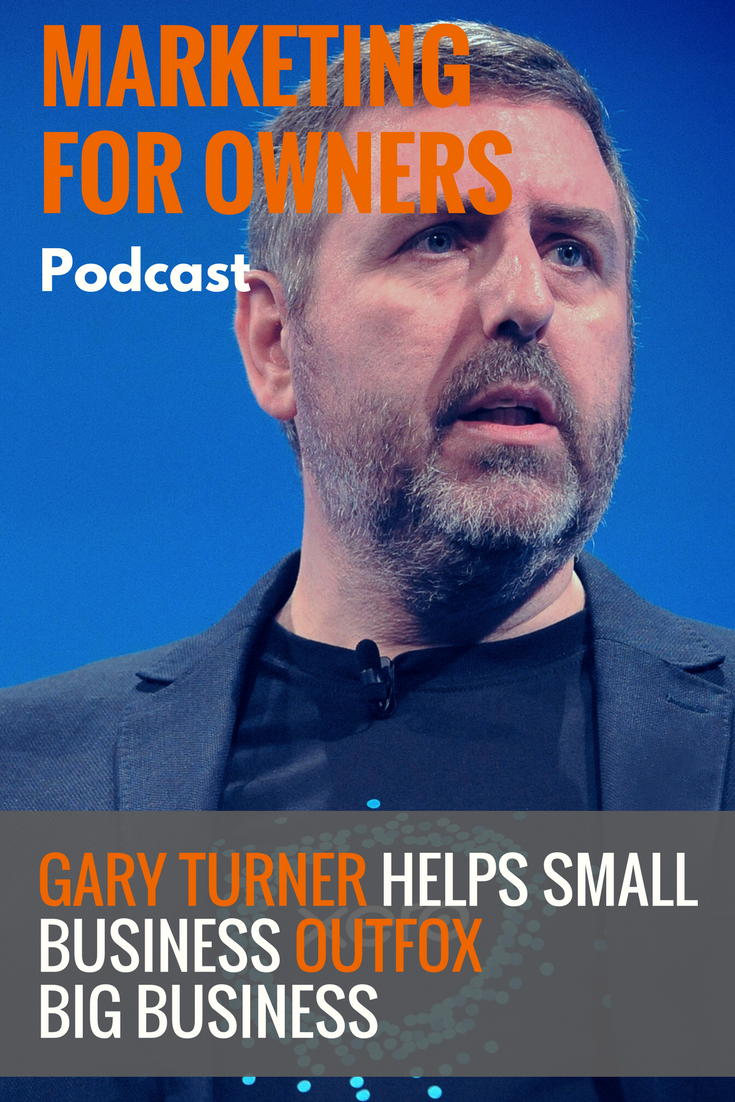 When Gary Turner was a teenager, he fell in love with computers and technology, and although he never really had a clear sense of what he wanted to do back then, he knew it had to involve technology.

He also grew up in an entrepreneurial household, with a Dad who owned his own business and a Mum who was a bookkeeper. So he grew up around small business and accounting, which along with his passion for technology, has led to him becoming co-founder and managing director of Xero UK.

Running a company like Xero, which is cloud-based accounting software, makes it easy to say he has an appetite for helping small businesses. But Gary insists it really is a fundamental part of him, and that’s thanks to his parents.

He grew up in a home where the conversations at the dinner table where about business problems, and he knows exactly what it is like for small business owners. He understands that they often get a raw end of the deal, despite making up 99% of all business, hiring two-thirds of the working population, and contribution more than half the yearly GDP.

It’s easy to see that his passion is genuine. And he’s sharing with us his own experiences in business, and how he used all of that to grow Xero UK and make it a success over the past eight years.

Doing Everything You Want

Back in the 90s, before the internet, there was just good old fashioned PC software. Pegasus was one of the first one of its generation, and Gary was lucky enough to join the team.

He started off in a junior sales roles, and worked his way up through many job titles, until finally becoming managing director for four years. During that time, he was able to achieve everything he wanted, until he felt he could do no more.

That’s when a job a Microsoft became available.

He’d always wanted to work for Microsoft, being such a computing giant during those years. And of course, when the opportunity was there 10 years ago, he couldn’t not take it. It ticked something off his bucket list and gave him his next big challenge.

But ‘why not’ isn’t a good enough reason. It was not a real ‘why’ for what he was doing.

Although he found it interesting at the start, he discovered what it is like to work for such a massive company. Not long after he started, the financial crisis hit in and Microsoft shelved many of their projects; and they were the real interest for Gary.

Then eight years ago, he then received a message on LinkedIn from Hamish Edwards – one of the co-founders of Xero – and he was looking for someone to build their business in the UK.

Gary hadn’t even finished reading the message before he knew it was the sort of thing he wanted to be involved in.

Although he had never built a business from the start before and had no experience in doing so, it was an itch that he wanted to scratch.

The people at Microsoft thought he was crazy for leaving in favour of a relatively new business. But for him, it was an obvious opportunity, and he knew that the cloud was going to transform software.

By his late 30s, he’d spent a long while working in the industry, and felt he had the experience to pick a winner. The proposition was ticking all of his boxes, and he felt it was a pedigree software business.

When Gary first started at Xero UK, they had a customer service team which consisted of one person, a few guys in sales, at him at the helm. Plus, they had no offices to work in.

But by that point, they already had a few hundred customers as it was simple for anyone to just sign up. Plus it was fuelled by the success Xero was enjoying in New Zealand.

They all worked remotely and would meet up together in hotels, as they were a lean organisation becoming established.

Like any small business, particularly in the start-up phase, he was hands on and doing all the jobs that were needed. He was a multipurpose manager, wearing different hats with different abilities.

When it comes to growing a business, everyone agrees that you should plan ahead. Despite this, the present time will jump up into your inbox and short terms things arise which need your focus.

This creates a seesaw between investing enough time in planning and thinking where you should be next, Vs execution on the ground today. That balance will vary, but it is so easy to get caught in the short term because planning for the future doesn’t give you results today.

At Xero UK, there are now around 200 people in the team, with over 1,500 globally. That has come from making the right long-term planning decisions, as well as doing the day-to-day jobs.

Although at the start you have to do it by yourself, the trick is getting the right people in at the right time to help you, so you can build a great team around you. That then frees you up from the day-to-day in order to think where you’re going next.

Gary refers to himself as being a generalist, and that means he can pretty much shake a stick at almost anything. He knows just enough about everything in order to be dangerous, which is a great skill to have when you’re a start-up.

Altogether, these are all skills that he has accumulated over time, from the range of roles he had at Pegasus to just thinking back to the struggles his parents.

They all enable him to make decisions which will help the average small business in the UK.

“It’s not the big that eat the small, it’s the fast who eat the slow.”

That’s the mantra they have at Xero.

In the old world of business before technology and the internet gave us the efficiencies we enjoy today, scale was key. The more resources you had and the more people you hired, the more money you had. Being big was your advantage.

But that has now flipped, and it’s now about being highly mobilised, utilising the best tools and having a clear sense of what you want to achieve.

Small businesses can make quick decisions, and that makes them agiler and more effective. So when you have an idea, do it today instead of waiting to do it one day, assuming you don’t forget.

Of course, your idea may not work, but at least you tried something. Use your smaller size to your advantage as you’re able to do things a big company could never do, such as acting instantly on a new idea.

There’s No Get Rich Quick Scheme

Once you’ve cracked business, it’s easy from there on and business will just fly in the door… That’s the dream at least, but in reality, business just doesn’t work like that.

The bigger you aspire to be, the harder you’ll have to work in order to achieve it. It is incredibly rare to experience major growth which just happens overnight. Successes like Facebook don’t happen often.

Actually, you instead grow a little bit every day, and because it is so gradual, you don’t realise. So stay focused on the victories, no matter how small, and they’ll all add up to something big.

With a longer term view, you’ll see that 100 or so of the things you did all helped the business to grow, and not just that one thing. So, unfortunately, there is no secret scheme which Gary can share to get rich quick. Instead, it’s going to take time and effort.

The hardest part of running a business is balancing your time correctly, as it can become very demanding. And that’s particularly the case in a global business.

Gary has learned that he has to be smart about how he uses his time, and that starts with his emails. He was once swamped by unsolicited requests, but now simply marks them all as spam. If it were more important than the others, then they’ll eventually find another way of getting in contact.

This has enabled him to take back control of his inbox, and it now only contains the important stuff which he needs to deal with.

He even spends an hour every few months just to unsubscribe from all of those emails which offer him no value.

Gary also uses Google Inbox to help manage his emails so that they appear in his inbox when he needs them. The free app allows him to mark the email to be resent on Friday if that’s when it needs his attention. Or when linked to his GPS, to ensure he has the emails he needs when he enters the office.

And particularly for a global business, video conferencing tools are also really important. They allow people from all over the globe to come together as if they were all in the same room.

To get started and to find out more about online accounting software, then Xero UK is the place to visit, where you can take out a free trial to see how it works and how it can help you and your business.

The website is full of content to check out, including blog posts and instructional videos about using Xero, as well as what it is like to run a small business.