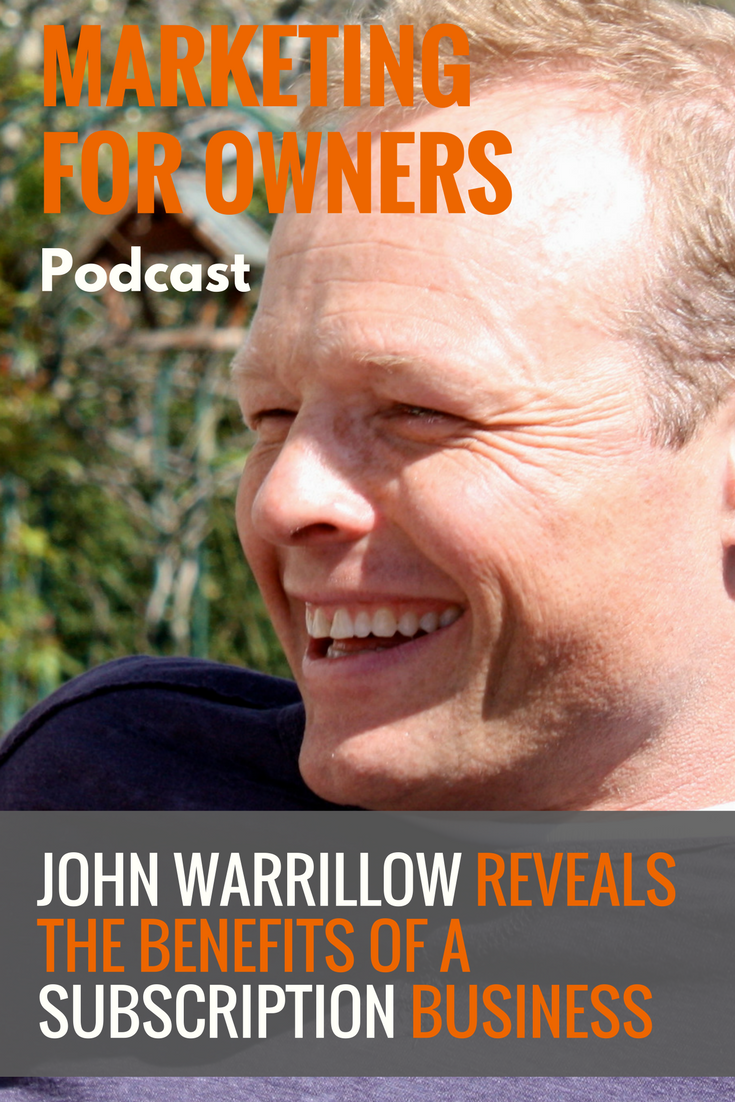 For more than 20 years, John Warrillow has been studying entrepreneurs. In his market research business, he tried to figure out what made them tick, and his marketing agency helped companies to sell to them.

He even had a radio production company whose biggest show was Today’s Entrepreneur, where a different entrepreneur was interviewed every day for three years.

Thanks to his own experiences and what he learned from other entrepreneurs, he has since written two books and is the creator of The Value Builder System which can drastically improve a company’s value.

John see’s that the business landscape is changing, and subscription models are leading that fundamental change, as more and more business distance themselves from the transaction models we’re used to.

With music, retail consumption of records and CDs has dropped off the map. First, it was iTunes, but now Spotify and Apple Music are leading the charge. And the same is happening with books and DVDs thanks to Kindle Unlimited and Netflix.

Why would anyone go to the shop when people will deliver items to your door without you needing to do absolutely anything?

So it’s time to consider the subscription business model. It wasn’t easy, but John’s market research business managed to succeed in making this monumental change, and with his help, you’ll be able to do exactly the same.

What Is A Subscription Business?

In a transactional business, where customers buy things from you, they have to make the decision to make the purchase. To influence that decision, you buy advertising and Google Keywords, and then wait for them to visit your website or shop, or even for the phone to ring. Hopefully, they’ll then make a transaction and opt-in.

With subscription business model, it is assumed that the customer wants to be a subscriber to your products and services. It is then up to them to opt out. Just like with Netflix, you’ll be billed until you tell them to stop.

And it suits today’s world with technology making it a popular choice for businesses and consumers. With music and film, we’d rather rent the ability to play it than actually to purchase it.

Even for Millennials living in homes, many prefer to buy rather than rent. The intent to buy isn’t there like it used to be because they enjoy the affordability, ease, and freedom it can bring.

But the model was leaving him frustrated at having to respond to requests for proposals, only to find he was simply providing quotes to make up the numbers. And every month there would be a scramble for work and a wait for customers to say yes.

Market research requires skilled and talented individuals, and they don’t come cheap. It meant he had to toe the line between having enough people to do the work, without overpaying during quieter periods.

In the middle of the noughties, he made the decision to change the company from being project based to subscription based. And it shows that any business can do it.

This change meant that customers would receive one piece of market research per quarter, to which they would subscribe to. And he had companies like Virgin, BT, Bank of America signed up.

At the time of the change, it did mean that he lost more than half of his staff, as a result of them not buying into this model of business.

And it didn’t go smoothly either. The first time the business made the change, they actually abandoned it after four months. That was because they were using old yardsticks to measure a new form of business.

The change meant that instead of receiving $50k when they took on a project, it was instead shared over the 12 months, earning them just over $4,000 per client a month. As a result, the profit/loss statement was showing massive losses, and when the business took the step back, it lost a lot of value.

It meant that he had to find a better way to manage a subscription-based company, such as looking at the LTV:CAC ratio (Lifetime Value : Customer Acquisition Costs).

That compares the long-term value of a customer to the cost of getting them to become a customer, and he was looking for a ratio of 3:1.

Profitability and revenue are historical interpretations of business and doesn’t accurately reflect the health of your subscription business.

Once he discovered his error, he relaunched and turned it into a successful business venture before selling it in 2009.

What Could You Do?

After that, John started a new business The Value Builder System, which is also a subscription company. In this business, the big number they look at and focus on is the MRR (Monthly Reoccurring Value).

They’ve now done over 25,000 value assessments of companies. On average, they’ve found that a business following the traditional model gets an offer of 3.7x their pre-tax profits. Whereas companies with 100% of their revenue coming from reoccurring profits generally get double that.

One of them is the consumerable model leveraged by companies such as Dollar Shave Club. They ship razor blades to subscribers regularly and remove the need for men to have to repeatedly purchase blades themselves, and are often a cheaper option too.

Last year, they were generating $200 million in reoccurring revenue. Unilever then acquired it for $1 billion.

The surprise box model is one of the best-known models, and it involves subscribers being delivered a box of goodies full of samples of products. These are often interests such as chocolates and cosmetics, and recipients pay for every box despite not knowing what they’re getting. However, these are generally the least popular and most likely to go bust.

Or there is the simplifier model which is actually a more practical alternative to transactional models in some cases. Sometimes it is just easier to bill and be billed on a regular basis.

For example, a music teacher could come on the same day and time every week and bill you via subscription. It means customers haven’t got to worry about having cash ready to hand over and makes it predictable and consistent to the benefit of both parties involved.

Once upon a time, Microsoft used to sell their software on discs in boxes which you could pick up from a store. You’d pay for it once and own it forever. Now, you pay an annual subscription for it.

Although it may take three or four years to actually recoup the costs, the hope is that customers will be subscribed for decades to come and creates a great deal of extra value.

Thanks to Microsoft’s billions, this model is sustainable. For smaller businesses, this can be harder to afford and is often why subscription models need a great deal of investment.

If it takes $500 to acquire a new customer, and you charge them $99 a month, it’s going to take the best part of five months to get your money back. For some businesses, that’s a long time.

Also, if the business enjoys a lot of growth quickly, it can be difficult to afford, and can often be the cause of a company going bust.

An alternative approach to better manage it is to charge for the subscription upfront. You’ve seen the deals where, when you pay for the year upfront, you get a month free.

And it’s actually what Microsoft do. They charge you when you sign up for the service, and not after you’ve used it.

That changes the investment and means you can effectively recapture the CAC on the day the customer signs up.

Churn (the measure at which people leave a service) is the killer of a business. And we know that the better the experience people receive at the start (the first 90 days), the more likely they are they’ll be to have a long-term relationship with a company.

If they have a bad experience, they’re more likely to churn and it’s hard to recover from that 90-day window. First impressions are important.

This is the case because a customer is at their most excited about the product, and you need to make the most of that momentum. With every hour that goes past, the excitement weans, so you don’t want to leave getting in touch with them any longer than you have to.

People also most often quit because they’re not actually using the product or service. So you want to change their behavior as quickly as possible.

With Netflix, people used to put the TV on their favored news channel when they finally sit down for the evening. Now, they’re putting on Netflix and decide what’s going to be the next boxset they binge on.

And just like with any meaningful relationship, you need to keep the romance alive. Rather than a one-off like you get with transactional businesses, it’s good to sometimes remind them why they chose you and why you’re better than everyone else.

At BarkBox they actually have two full-time employees who search the database looking for reasons to drop a ‘happiness bomb’ on a subscriber. If a subscriber has a sick or injured dog, they’ll go out of their way to do something nice outside of the usual subscription.

You can get your Value Builder score for free, and it will only take you just over 10 minutes to complete. It will help to give you a sense of how your business is viewed through eight different factors. On the website, you can also find out a lot more about how you can increase the value of your company.

John’s books are well worth a read. Both The Automatic Customer and Built to Sell are available to purchase now on Amazon.