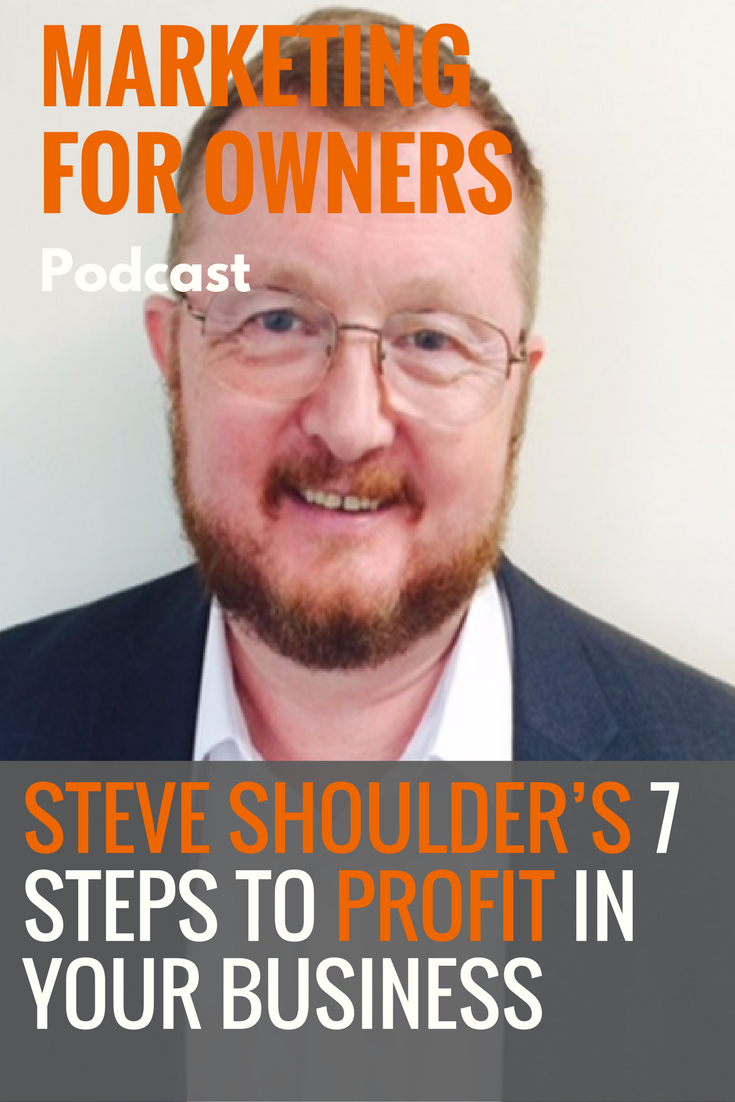 For the past 20 years, Steve Shoulder has been spending his life being involved in the transformation of businesses working as a Professional Interim Manager.

It was a watershed moment that he experienced which involved him making a decision about which way he was going in his life. So he went to Cranfield University which set his life on a different course.

During his time restructuring businesses to turn them around, he has worked with the likes of BMW, as well as smaller family businesses. The high profile projects he worked on early in his career helped to catch the eye of big agencies, and ever since has had no trouble in finding work.

On average, Steve will spend around 9 months in a business putting in place changes which will solve a company’s biggest problems and enable them to turn over a bigger profit.

He has even written a book, 90 Days to Profit, which helps you do just that for yourself in a short time span. And Steve is going to share with us his 7 steps to profit.

With a background in manufacturing, as well as industrial management and marketing, Steve has seen his system work in many different types of business.

As long as there are people and processes, then the businesses are similar enough. What he does can be applied to almost anything, whether it’s a product or service.

He has worked within 20 different industries, in 29 different companies, and has been successful every time. Although every business is different, the same methodology is used to achieve the success.

Steve started up a business himself and did so using a very similar methodical approach.

Although being a start-up it took longer, he approached it in very much the same way. When you look at what you want to achieve and have a way of working through all of the steps, then it can work.

He’s seen that smaller businesses are actually better equipped than larger ones to run through changes like the one’s which Steve puts in place. Whereas in a corporation there is usually a group of which need to make a decision, a smaller business will have one owner or manager who makes the decisions.

When Steve goes into a business to help them out, he wants to ensure he is providing them with good value for their money. Morally and ethically, he likes to give back 10x what it costs them to hire him. It’s returning the investment they make in him.
In fact, whoever you employ, they have to be giving good value.

When it comes to owners in their own businesses, the temptation can sometimes be there to massage the numbers. But his advice is to keep it absolutely straight and honest. After all, you’re only kidding yourself and it will find you out in the end.

You also need to value your time. At the beginning of a business, you may well be likely to put in more hours than the return you receive yourself. And that’s okay.

But you can’t allow it to continue, otherwise it just becomes another low paid job, and that’s not what you’re doing this for. So don’t let it become the norm in the first place.

The 7 Steps to Profit

When Steve first goes into a business, he always tries to establish what they’re trying to fix straight away. However, it usually ends up that the problem he is going in to fix isn’t the one they end up fixing.

Anyone with a level of business competence can get a result using the following process, taking the business from one position to another which is better. But by doing it by yourself, you just may not end up in the absolute best position as having the assistance of someone with experience doing this, such as Steve.

In order to figure this out, his first task is the P in PROFITS…

This is the problem which needs fixing. And to figure out what it is, he will talk to staff at all levels and disciplines of the business, as the view of what the actual problem is, varies. When he does it, it can take between 1 to 3 weeks, asking each person ‘What one thing would you do to fix the business?’

Before you get to this stage, you need to have communicated to the whole business what the problem is you’re going to start resolving. Then, using all of the available data relating to the issue, you analyze it to fully understand the problem as much as possible.

The numbers tell the story of what the current reality is for the business. And often, many people within the business know what this is, but are not doing anything about it.

This is likely because it is an uncomfortable truth otherwise, they’d have already fixed the problem themselves. But regardless of that, it needs to be accepted, and to then work out the different options available to fix it.

At every level, people also know what the problem is in their particular facet of the business. But it takes someone to stand far enough away to understand it in totality.

There may now be half a dozen ways in which the problem can be fixed, so you now need to narrow the focus and pick the one thing you’re going to do well and have an impact with. Then all of the other different options go on the back burner as you can only do one thing well at a time.

It doesn’t particularly matter what that one thing is, but you do have to ensure that everyone it behind it so they can all work towards making it a success.

At this stage, you should be trying to run a pilot programme for the changes you’re trying to put in place. And ideally, you’ll be doing this in an area of the business where the risk is reduced.

If that isn’t possible, then you must try to get it as tidy as possible before you actually press the button which implements those alterations.

Now that the pilot programme is running, avoid the temptation of making the numbers look better than they actually are. Track its true impact against a measurable within the business which is important, such as the gross margin, output, or waste.

And whether the results are good or bad, you should be sharing them with everyone within the business regularly. People will then trust you, and have confidence. And if you don’t, or you’re not honest, people will likely check or hold you accountable if it goes wrong.

At the last stage, you have the results and feedback from the pilot implementations you’ve had in place. You now know that it will work, or at the very least the changes you need to make in order to make it work.

Now you can shape the big push which will see these changes go into the whole business, using everything you’ve learned up to now.

Steve has just released his latest book 90 Days to Profit which now available to buy for just 99p. 90 Days to Profit may seem like a short time to turn a business around, but he knows it is possible having done so himself in the past.