So why am I talking about updating your business in 2017? First of all you might think, “It is a bit late, Jon this is June.” And there is the thing, yes can you believe that it is the middle of June already?

Obviously it was just Easter, it was just Valentine’s Day in February, it was just Christmas, we are in the sixth month already it is the summer, pretty much, virtually.

That means that anything you are thinking of starting, you think, “Oh, it is a bit late.” Time goes so quick, when you look back you think why didn’t I start that?

So if you are going to make a change, don’t think, “Oh, it is too late now, there’s only six and a half months left of the year.” No, do it now and in sort of three or four months you will be thinking, “Oh! I am almost done.” It is never too late to start.

So what am I talking about anyway about updating your business? This is sort of based on a podcast I was listening to from Brian Fanzo.

Now if you go to isocialfanz, or look up Brian Fanzo on Marketing for Owners website you will come across his podcast; great guy, really social, lovely genuine, genuine guy.

Anyway if you go there, he was talking about, he called it rolling with the punches because you have got to be adaptable. 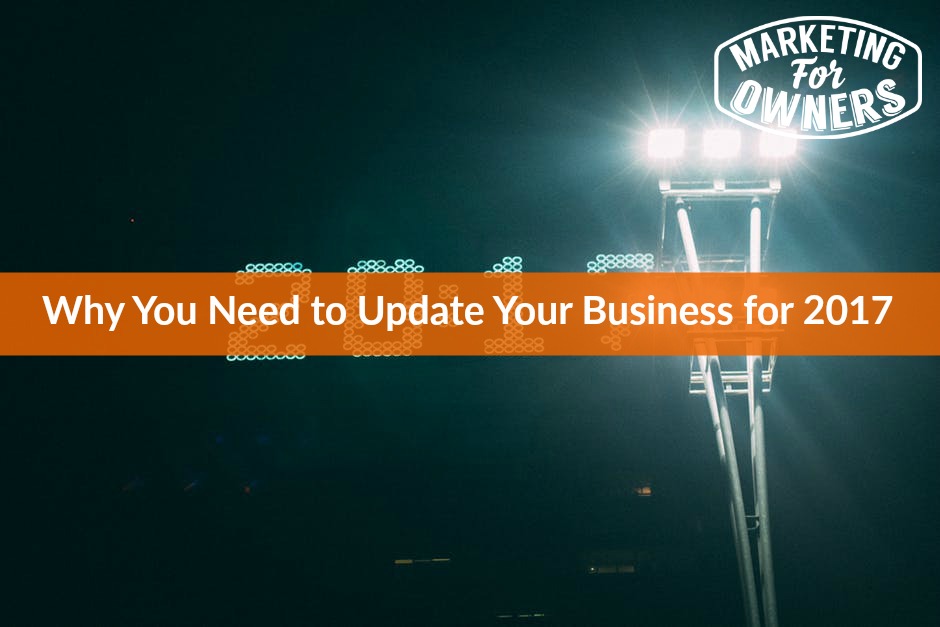 You need a plan B. Things will go wrong; things will be outside of your control.

When Brain was talking, for example imagine he was in Denmark I think, he was on a paid gig and he is over there and doing a speaking gig, a paid speaking gig he was flown to Denmark from the States, pretty big deal and he is out there and there is a problem with his slides, with his presentation.

The people in the audience don’t care about the problem, they know it is not your fault, they know it’s probably not even anyone’s fault. But they have paid or they are sitting there wanting to listen to you. What would you do? Would you have a plan B?

In your business you will have things that are in your control but will still go wrong, trust me. I have quite often described a business as a series of problems and a successful business is one that can deal with problems very quickly and in a way to stop them reoccurring, because problems will happen.

But we can cope, we are able to deal with things, we have stress tested our business over and over, which is what they do to the banks these days to see if they would stay afloat if a financial crash happened. And that’s what you really need to do to the business.

Now when you stress test it, you are not actually running through an exercise, it’s not like in the old days your train for a nuclear accident or something like that; you don’t have to go that far.

All you need to do is to think of, “If this happens, what would happen?” Just basic stuff; staff will go sick, you could go sick, contractors, outsourcers, other people will fail you, they will not deliver on time, they will have every excuse you want, so will your staff as well by the way, so will you.

But what will you do about it? Because this is the thing is if you want your business to be successful, the people who matter are your customers, your clients, or in the future, potential buyers of your business. Those are the people that really matter, they don’t care.

I will give you an example, in the UK we operate we are based in the corner in Kent in the south east of England, so we deliver all over to Scotland, Birmingham the Southwest, we are everywhere in the UK and we deliver using carriers on a next day delivery.

Now in our area of the country we could be snowed in, unable to get to the work. However, people can order online, they are based in say northern England where there is no snow at the time, so to them they look out the window and they want to know why didn’t their deliver arrive?

Now when we contact them and say, “Oh, I am very sorry we were snowed in”, all they think about is their local thing, they cannot imagine. They say, “Huh? There was no snow.” As far as they are concerned it is an excuse. What would you do?

No we have had this happen often, we have plans, we have things in place to cover that. And if you’re just wondering when that happens, we phone the people, we phone them. Remember the old telephone thing?

We don’t just send out email blasts, we pick up the phone because they have given the phone number when they have ordered, we phone them and say, “By the way this is happening, your thing is probably going to be late because our carriers can’t get to us we can’t get it out. Is that a problem? Do you want your money back or is that okay just to wait?”

And then we get feedback to say, “Oh, delivery was late, I was promised the next day but it turns out they couldn’t do that, but fantastic fantastic service because they contacted us.”

So what would you do? This is your new business, the one that does not take it on the fly, doesn’t run on the fly, operates as a business. You have got half a year to start to put to these things in place. Talk to your staff, let them know that you need scenarios, you need to think of how do we plan for these things?

You don’t have to have it written down, quite obviously you cannot think of every scenario that may happen that you weren’t going to expect to happen. If you’re expecting them to happen, you plan for it. So you can’t force it, you just need to be adaptable and that’s it.

Anyway, enough of, I think you have got to the gist. Tomorrow is Wednesday and on Wednesday we have our Expert Interview Series. So tomorrow I’ve got a gentleman called Leonard Kim.

Look him up, he is great, seriously. He explains how he went from a complete nobody, what he did to become an influencer.

Now we talk about influencer marketing, he explains how he became one and how he teaches people to become one; instead of reaching out to influencers, become one yourself.

It is fascinating and it is from a genuine guy who really was absolutely fantastic at the beginning and he won’t mind me saying so, it’s great, listen in.

I will be back on Thursday with another quick tip that you will enjoy.