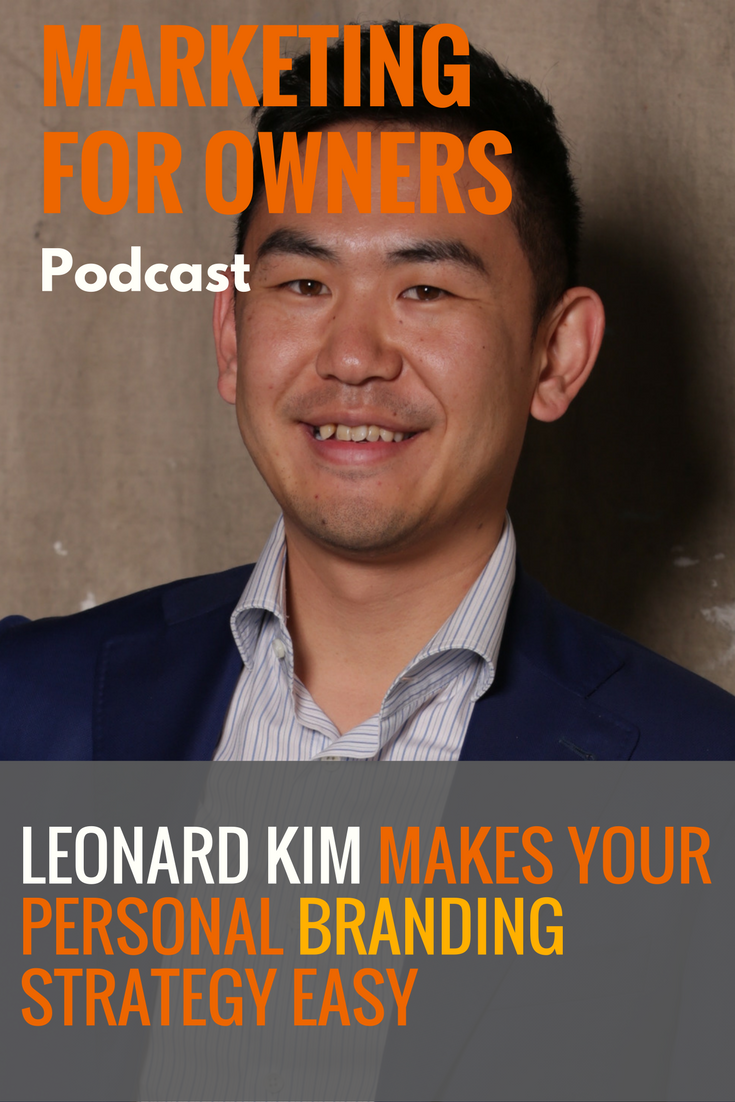 As a child, Leonard Kim had always wanted to go out and live the American dream – having a wife, money, a house and a car. And he tried as hard as possible to make it happen.

But he always seemed to encounter the problem that everything he worked on just fell apart. It’s a journey that left him down on his luck, homeless and contemplating the unthinkable.

It was at that moment when reflecting and analyzing his life, that he found a way of pivoting all those negatives into a positive. He began writing about his experiences to help others avoid making the same mistakes.

Not long after, his articles had millions of views, he was in a much better place, and was on the brink of creating a new business which would prove successful.

Leonard’s story will show you why you must never give up on yourself or your dreams, and will teach you the importance of embracing whatever life throws at you. And on top of that, he’s always going to share with you his self-taught method for personal branding, having cracked the code at Influence Tree.

In 2005, Leonard was selling cars and working 15 hour days, six days a week. He was making good money but too exhausted to actually enjoy it. Not happy with what he was doing, he set out to become an entrepreneur.

By age 21, he was already in a ton of credit card debt as he tried desperately to make his business work. Then just before 2008, he decided to go into real estate to make his fortune instead.

It wasn’t long after that the financial crash happened and he jumped ship to investment funds, which was also soon to crash.
Working at multiple business start-ups, failures and breakdowns continued to follow him.

With his electricity cut off after not being able to pay his bills, he had to resort to microwaving his store-bought Burrito by taking his microwave into the hallway outside his apartment door.

Not long after, he was evicted and forced to move in with his Grandma in Orange County for six months, before moving back to LA, sleeping on a couch for $100 a month, and working a below minimum wage job.

Through it all, he kept trying to make a business, as well as reconciling with his former girlfriend, but nothing worked.

He then made the decision to end his life.

But after receiving a goodbye letter from him, his worried ex convinced him to change his mind. And that was when he decided to stop going after his dream, and to instead simply live in the moment.

Breaking his ankle not long after was a blessing in disguise. Unable to do anything for three months and in a cast, he had time to figure out why he was where he was, and to reflect on his life.

He saw how everyone had looked up to his Grandfather, and that was thanks to him giving back to the community and always having time for anyone. Leonard saw he wasn’t living his life that way.

He also reflected back on when someone had told him that no-one was ever absolutely useless because you can always be a bad example. And that’s when it clicked for him.

Leonard could tell people exactly what not to do, and to stop others from making the same mistakes he had made.

After reading the work of James Altucher, and connecting with his article on how it felt to lose a lot of money quickly, he soon decided to get his own message out to the world.

Choosing to write, it soon started to actually work out. Within six months his articles had been read 2 million times. Six months later, that figure was at 5 million, and was then at 10 million just 18 months after he started.

People were really connecting with his articles on Quora and was soon named as one of their top writers. His articles were then syndicated by publications such as The Huffington Post, and people then began wanting to interview him.

It was after reaching 1 million views that he decided he needed his own website, wanting to keep that success growing and to make the most of it.

Ultimately, it worked because he started writing without any expectations, and the writing came from the heart. Had he started with the goal of reaching 2 million views in six months, Leonard doesn’t think it’d have worked and would have instead been disappointed.

With this success and influence, he wanted to find a way of monetising it, but actually missing the opportunity right in front of him…

It was after months of receiving hundreds of requests from people asking him to tell them how he’d had this success so they could replicate it for themselves, that the light bulb finally switched on.

With his business partner Ryan Foland, he created Influence Tree which now helps people to grow their personal branding and social media following, whilst getting articles in publications.

Leonard came up with the formula and tried it with Ryan, who began to see similar success. And when he went on to test it with his clients, they were also having articles which were read over 400,000 times. He was managing to duplicate his success with other people.

With the course, he breaks it down into bite-size chunks. That’s to avoid people suffering from ‘analysis paralysis’ which happens when overwhelmed with so much information that you don’t know what to do first.

By going through it week by week, people using the course are able to continue in the right direction.

Success doesn’t usually happen overnight, and it takes time. As a process you complete by yourself, it can still take three to four years, and for Ryan under the guidance of Leonard, it took him a year.

Figure Out Who You Are

The first step in the process is to figure out who you are. And fortunately, they have a process which is far quicker than having three months of forced reflection.

The Influence Tree course suggests using two different colors of post-it notes. On one color you write as many adjectives as you can think of to describe yourself.

With the other color of post-it notes, pass one on to each to your friends, family, and colleagues, asking them to anonymously pick one word each to describe you.

All of these words together will then allow you to exactly discover who you are.

Using a wall, cluster together all of the similar words, and you can then identify these as being your key strengths, and what you will want to incorporate into your personal brand.

And any bad traits which people have identified in you are areas which you need to begin working on quickly before you begin building your brand. For example, Leonard feels people were only able to connect with him as he had managed to ‘get over himself’. Beforehand, people would have described him as cocky and arrogant.

Then, when you do out into the world with your personal brand, you need to take your personality with you. Being fake will mean it won’t work, and people won’t want to know you. That is sill the case even when you’re working on behalf of your business.

Now you find three people you look up to, admire, and want to be like. For Leonard, one of those people was James Altucher. And then looking at your brand and theirs, you can see where you are now, and where you want to go.

And when you don’t know how to write or present, Leonard’s tip is to learn how those three people do it. Write their articles out, and repeat their videos and podcasts, word for word as they did it. Subconsciously, you’ll then pick up what they do and will be able to emulate them.

You can then work on your profile pictures, showing you as being relatable and fun, and form a good bio which tells the story of who you are.

When it comes to creating content online, you can either communicate through articles, videos, audio, or images. But if you’re just starting out, it’s a good idea to hit all of these mediums at once.

You can record a video on your phone, and then strip it out into a podcast, before then repurposing what you said into a written article. By then syndicating this content out, you get it out to more people than you could hope to otherwise achieve.

The best way to build your audience is by using pre-existing platforms that already have an audience. If you post on your new blog, no-one is going to know it exists and won’t go to find it.

But if you take Quora or Medium, then there are audiences of millions waiting.

When you write something at Quora, they’ll then want to push it out into their network, which provides you a good way of figuring out if your content is any good.

If people like it, the algorithm will then continue to push it out to even more people, while Medium will then allow you to pitch it to other publications.

If someone didn’t like the article on one of these numerous platforms, then they’ll simply leave the page. But if someone connected with it, they’ll click your picture, read your bio, and then click onto your website to see what you do.

When they then need or want your services, they’ll get in contact. And it will all be thanks to your personal branding.

New clients will soon notice you and come to you just for expertise once you’ve tried Leonard’s method for personal branding. Discover more about how you can start to achieve it by visiting Influence Tree.

It’s also worth checking out Leonard’s articles on Quora as there is an immense library of his work, all of which you’re bound to find useful. And if you have any questions for him, drop him an email at hello@leonardkim.com.